Theft Between the Rains by Luba Lesychyn

This post is part of a virtual book tour organized by Goddess Fish Promotions. Luba Lesychyn will be awarding a print copy of Theft Between the Rains to a randomly drawn winner (US or Canada ONLY) via rafflecopter during the tour. Click on the tour banner to see the other stops on the tour.

My books are cozy art theft thrillers, although when I started writing my first book, I didn’t realize initially that that was what the book would become. I started off with a character, Kalena Boyko, a museum employee who is seriously addicted to chocolate. And I wanted to set the story in a museum because I had been working in Canada’s largest museum, the Royal Ontario Museum, for a couple of decades. It was such a magical and extraordinary place in which to work and I wanted to share with readers the behind-the-scenes world with which I was so familiar.

The art theft plot came later in the development of the book and I realized how much I loved writing a suspenseful story and leaving readers wanting to turn to that next page and the next. But my books are also humorous (so they’re cozy thrillers) and I love the idea that I might be making people giggle or even laugh out loud when reading some of the scenes.

I was so fortunate to have first-hand access to the world in my books, so there wasn’t much additional research required for the museum aspect of the book. But for Theft Between the Rains, which is still primarily set at the Royal Ontario Museum, I also wanted to take readers to parts of Toronto that are rarely seen or visited.

To discover new locations for my scenes I went on city walking tours, some led by the Lost Rivers group (whose walks trace the courses of the city’s undergrounded or forgotten streams), as well as downtown walking tours organized by the Royal Ontario Museum. There’s also an annual event called Doors Open Toronto which allows the public to explore buildings of architectural, historic and cultural significance that are not usually accessible to the public, so I participated in that a few times. As a result, I not only ran across some captivating locations, but I spent my weekends in a tremendously fun and active way and got to know my city like I had never known it before.

I learned that despite being very capable, Kalena Boyko lacked confidence and if she stopped getting in her own way so much, she could be a powerhouse.

If I come up with an idea, or scene or dialogue, and I don’t have pen or paper to jot it down, I trust that I will remember it. And anything that I might forget was meant to be forgotten.

I have been both a plotter and a pantser. With my first book, Theft By Chocolate, before entering a creative writing program, I took one of those ‘How to Write Your First Novel’ courses. In it, I was required to develop my characters, create their back stories, develop detailed chapter outlines, and an overall summary. And that was very useful as a beginning novelist.

For Theft Between the Rains, I decided to be more of a pantser and I felt I was more open to new inspirations. However, doing it that way resulted in a much longer and meticulous editing phase.

An exquisite amethyst crystal, a round palm-sized stone from Iceland that is covered with a kind of woven wool jacket, a glass of water resting on a porous ceramic coaster, and a stunning art deco inspired lamp (it’s a woman holding up a glass globe) which casts just the right amount of light I need while working on my computer.

The current book upon which I’m working is quite a departure from my first two books. Although it’s still a mystery and set in the museum world, it’s a paranormal story with souls meeting in more than one lifetime. My early writing journey started with screenwriting and I had completed a script that I had always wanted to elaborate more fully into a novel. So, I’m finally going back to that concept to develop it into a book.

I’m also going to be working on a memoir/fiction blend about my family’s struggles and challenges as a first-generation Canadian family. Both works get me very excited about waking up every day and getting to my writing.

I’d be curious to know what readers think about authors who write books in different genres. When in writing school, we were often told to stay within one genre, but I’ve always wondered if it really made a difference to readers when writers switch it up and I know a few writers who write very well in each of their genres. 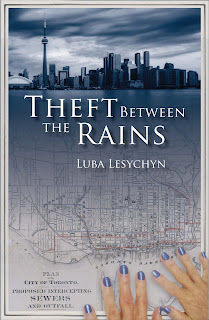 What would you do if you worked at a reputable international museum and art works listed as still missing since WWII began showing up on your doorstep?

That’s the substance of the newest urban art theft thriller Theft Between the Rains by Luba Lesychyn.

Drawing on her more than 20 years at Canada’s largest museum, Luba reintroduces many of the affable and quirky characters from the prequel, Theft By Chocolate. Also resurrected is the malicious art thief who has been on the world’s most wanted criminal list for decades.

Theft Between the Rains takes readers behind the scenes at museums and to parts unknown of Toronto. And with water being a character unto its own, Luba uses both humor and thriller elements to weave a page-turning story while simultaneously illustrating how changing weather patterns and flash flooding are impacting metropolitan centers globally.

“We are coming to yet another fascinating area of the facility. And it is one of the more recent additions to the building,” said Walter.

“Holeeeeeeeee,” said Marco. “This is straight out of some Sci Fi B movie.”

“It is something,” said Walter.

Before us were shelves full of jars – large jars, small jars, roundish jars, square jars – all containing clear liquid and specimens of every conceivable sort. I turned on my phone’s flashlight app, and the illuminated sight before me was truly haunting. Hundreds, probably thousands of fish, sea life, and land creatures floated lifelessly in their ghostly containers. Those whose bodies were turned in our direction seemed to be staring directly at us with beady eyes.

“All of these specimens are suspended in alcohol. If ever there was anything you wanted to learn about aquatic creatures, this is certainly the place to do so. Everything is organized by genus and species. They are whole specimens, and they have been stained to feature various elements. As you can see, the fish turn translucent when preserved, but with the dyes, one can make out the nervous or circulatory systems, for example.”

“I seem to recall we had no choice but to move all this off site?” I said.

“Yes, indeed. Because of their extraordinary weight, they cannot be stored on upper levels without adding costly structural supports. At the same time, if they’re stored below grade, there’s a heightened risk of explosion.” 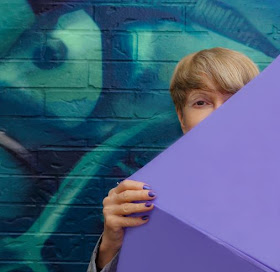 Luba Lesychyn is a popular Toronto-based mystery writer, a graduate of the Humber School for Writers, and a respected author in the library readings and events circuit.

In her two books, she draws from her more than 20 years of work experiences at the Royal Ontario Museum (Canada’s largest museum), and her time working for a private museum consulting firm to write humorous, international art theft thrillers featuring amateur sleuth Kalena Boyko. Her newest book, Theft Between the Rains, is a sequel to Theft By Chocolate (about a woman looking for chocolate, love and an international art thief in all the wrong places) published in 2012 by Attica Books and launched in Canada and the UK.

Luba currently spends her time writing and virtually touring Theft Between the Rains in which lead character Kalena Boyko returns to find herself pulled into international art theft intrigue when masterpieces missing since WWII start appearing on her doorstep.