Review: The Sundered by Ruthanne Reid 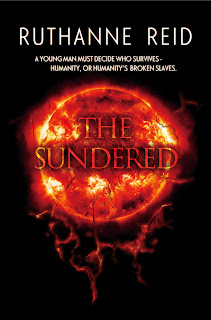 Don’t touch the water, or it will pull you under. Conserve food, because there’s no arable land. Use Sundered slaves gently, or they die too quickly to be worthwhile.

With extinction on the horizon and a world lost to deadly flood, Harry searches for a cure: the Hope of Humanity, the mysterious artifact that gave humans control over the Sundered centuries ago. According to legend, the Hope can fix the planet.

But the Hope holds more secrets than Harry knows. Powerful Sundered Ones willingly bow to him just to get near it. Ambitious enemies pursue him, sure that the Hope is a weapon. Friends turn their backs, afraid Harry will choose wrong.

And Harry has a choice to make. The time for sharing the Earth is done. Either the Sundered survive and humanity ends, or humanity lives for a while, but the Sundered are wiped out.

He never wanted this choice. He still has to make it. In his broken, flooded world, Hope comes with a price.

I can't remember the last time when a book grabbed me from the very start and wouldn't let go. What's really interesting about that little fact is that I can't really explain what it was that made the story so incredibly appealing.

That sounds like a negative, but it isn't. The author did her job with great skill and was completely unobtrusive. We're plopped down in Harry Iskinder's world with little knowledge of ... anything, really. Yet I never felt lost or frustrated by my lack of knowledge.

This is truly a one-man story, where the secondary characters are a bit fuzzy and out of focus. We see them, know who they are, but really it's all about Harry. Well, and his "first tier" (I feel as though I must add: "He has a name.") Sundered.

To summarize this book would be both difficult and laden with spoilers. But let me say that not one word was wasted, every single page was worthwhile and I'm planning on reading it all over again to see if I missed anything tasty because after a while I was just desperate to know how it was going to end I'm sure I must have skimmed it, at least a little. I loved Harry. I loved his Sundered (both of them). I wanted a happy ending, but was absolutely certain there couldn't be one. The author instead gave me the right ending; an ending that was surprising, ironic and while, not exactly "happy", wasn't sad either -- and I'm a HUGE happy ever after kinda gal. If it satisfied me, it will satisfy anyone.

When I finished the book, I was asked by a relative, "What was it about?" to which I answered, "I can't tell you... not won't, but truly can't." Because, while the book felt simple and basic it was deceptively complex and defies every try I make at explaining its plot.

I will say this: It was good. Amazingly, incredibly, surprisingly good. And if this is a sample of Ruthanne Reid's talent, then I hope she continues on releasing books. I'll be first in line to pick them up, no matter what the blurb or genre. She's gained herself a fan.

If I could, I'd give this a ten ... but since the top of our scale is five, that's what I'll assign it. With bells on.

Disclosure: I received this book from the author and Goddess Fish Promotions in exchange for my honest opinion.
Posted by MJ Thomas at 4:00 AM