Legacy Under Fire by Genie Gabriel - Virtual tour and giveaway 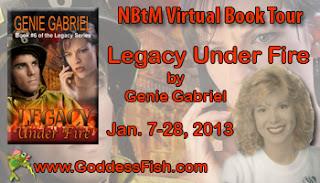 Today we're spotlighting author Genie Gabriel on her tour with Goddess Fish Promotions for the contemporary romance, "Legacy Under Fire".

Genie will be giving away a $25 Amazon GC to one randomly drawn commenter during the tour and a $10 Powell's Bookstore GC to one commenter at every stop, so comment today AND follow her tour (if you click on the banner above, it'll take you to a list of her tour stops)! The more you read and comment, the better your odds of winning. You could be introduced to a great new author AND win cool prizes and a GC!

After being trapped in an arson fire that destroyed her clinic and her memory, a doctor struggles to regain her courage as well as solve the mystery of why someone would want to kill her. A different kind of heat fills her life when she falls in love with the firefighter who rescued her, but can he protect her from the man determined to snuff out her life?


Jeremiah looked across Celestial Creek toward the doctor's clinic, hoping to see a slender figure moving this direction.

What he saw instead was smoke billowing out an upper window. The building wasn't part of those destroyed in the explosions on this side of the creek, yet it certainly seemed to be on fire.

Jeremiah started walking rapidly toward the building, then broke into a run, as he shouted into the radio wired to his helmet. "Fire at the doctor's clinic on the east side of Celestial Creek."

A muffled curse answered him, followed by a pause, and the order to one of the engines to hit the other side of town. Jeremiah pounded across the bridge at a run, focused on Shiloh's clinic.

The redirected engine arrived at the same time Jeremiah did. Flames shimmered menacingly through the glass doors in the front of the building, so Jeremiah trotted around to the side. Usually unlocked during business hours, the side door seemed jammed shut. Using a crowbar, he pried it open. While his partner directed a hose line on the flames, Jeremiah dropped low and scanned under the smoke for any sign of the doctor.

He found Shiloh by the window, unconscious. A knot swelled at the back of her head, and her skin was red from the heat, but she was breathing.

"The whole building is about to collapse." The message came over Jeremiah's headphones.

Praying Shiloh didn't have severe neck or spinal injuries, Jer lifted her into his arms and exited the building. His partner backed out behind him, spraying water that quickly turned to steam in the fire intent on consuming the doctor's clinic.

For years I've been fascinated by the puzzle of why some people collapse under life's traumas and others emerge triumphantly stronger. These triumphs of the human spirit over the ugliest of adversities became the basis for my stories. Yet my dramatic stories have always contained touches of humor, and sometimes I have great fun writing romantic comedy novellas. However, in all my stories, my passion for writing romance is an outlet for the powerful messages that people can overcome great difficulties, and true love can turn life’s heartaches into happily ever after.