Woman of Substance by Annette Bower - Review tour and giveaway 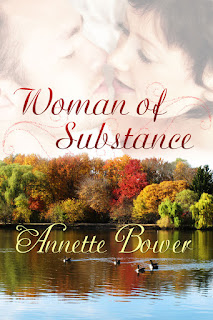 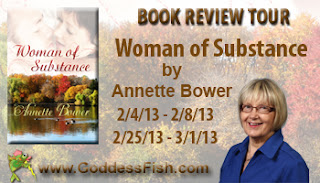 Annette will be awarding a $25 Amazon Gift Card to a randomly drawn commenter during the tour, so comment today AND follow the tour (if you click on the tour banner above, it'll take you to a list of her tour stops) -- the more you read and comment, the better your odds of winning. You could be introduced to a great new author AND win an awesome prize!

"You will never understand what it means to be fat.” With those words, grad student Robbie Smith begins the Fat-Like-Me project. In order to support her thesis, she puts on a fat suit to measure people’s reactions to the new her.

Accused of embezzling funds, Professor Jake Proctor returns home to spend quality time with the only father he has ever known. There, he meets an intriguing overweight woman who reminds him of his late grandmother. She’s witty, charming, and cares deeply for those around her, including his dying grandfather.

When Robbie meets Jake while she’s in disguise, she deceives him for all the right reasons. But how long can she maintain the deception before Jake discovers that she is not who he believes her to be?

This book was nothing like I expected, and ended up being so much more than I'd hoped. It could have been full of preachy clichés , but instead it was just a real, honest story.

First, I have to say how well Ms. Bower crafts her characters. They're all so individual, three dimensional and real from the most important to the ones who are barely walk-ons.  I loved Robbie, and I adored her group of women she used for advice on being fat.  I disliked her professor, and reserved judgement on Jake because he so clearly loved his grandfather, Frank (Frank by name, and Frank by nature).

From the moment the book starts with poor Robbie knocked to the ground wearing her fat suit and unable to get up, to the last, sweet moment I was enthralled.  This book is primarily about perception and emotion and will tug hard at your heartstrings (I even cried at one point).  The author clearly did her homework and shares things like how our gestures matter, and had deep insight to the human psyche.

Not that it's all deep and thought-provoking... not at all. Frank (the goose whisperer), especially, lightens things up all the time with his incredibly fun personality.

With a dozen strong secondary characters, enough emotion to make your heart swell, sing and sigh and family ties enough to make you grin, Woman of Substance is a sweet romance that I recommend to any romance lover.

Rated 5 Flowers - I loved this book! It's on my keeper shelf! I highly recommend it.

Now enjoy an excerpt when Robbie, in her disguise, meets Jake for the first time:

Robbie’s cheeks burned. “You, you think I’m asking Frank for money?” She forced herself to stand straight and gripped her hands so she wouldn’t brush at the dirt clinging to the front of her jacket and kept both feet on the ground so she wouldn’t kick him in the shins. These solid shoes would give him a good bruise.

“For starters, you look as if you could use some clean clothes. There’s bread on the bench. And there’s the open wallet and a frail, old, man.” His clipped words and flashing eyes when he nodded toward each item left no room for doubt as to exactly what he thought.

Struggling between her outrage and the genuine concern in Jake’s eyes, she said, “Ah, Sherlock Holmes, I presume.” Nincompoop. Just goes to show a well-fitted jacket and height can disguise real character, too.

“No.” He put his hands behind his back and jutted his chin forward. “I’m a concerned grandson.”

“Stop it, both of you,” Frank growled. “Here’s the picture of Mabel I wanted to show you before Jake turned up out of the blue.” He handed his billfold to Robbie. Behind yellowed plastic was the image of a woman with dark curls smiling at the camera holding a baby wrapped in a blanket.

“That’s our Mabel.” He looked from Jake to Robbie.

“Yes.” Jake stood behind Frank and his hands hung loosely at his side.

Robbie felt a sense of relief. She turned toward Jake and pointed at the baby. “You?”

“No.” Jake sounded resigned. Robbie understood that sometimes a person just has to allow the story to be told.

Annette Bower writes about women in family and women in love and women’s quest for love. Her short stories are published in magazines and anthologies in Canada, United States and in the United Kingdom.

Annette Bower lives and writes stories from a high rise where she can see the immediate hustle and bustle of downtown Regina and experience the changes in the grain fields throughout the Saskatchewan seasons.