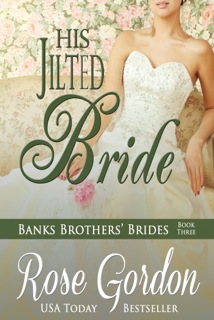 It's her wedding day and there is no groom in sight. But why should Amelia Brice be surprised? Hiram, Lord Friar is known for having no gentleman's honor to speak of and his jilting her on their wedding day makes it official.

Elijah Banks cannot allow his childhood friend to continue to be shamed this way. It's been almost an hour past the time when the wedding was to start, and that bounder still hasn't shown up. Unable to sit still a second longer, Elijah does the only thing that seems logical from where he stands: kidnap the bride and marry her himself in order to escape this scandal with one far more forgiving for a young lady's reputation.

The only trouble is, she has a secret...but so does he; hers is big...but his is bigger.

His Jilted Bride is both a typical and atypical historical romance.  Typical because of the mores of the time (especially regarding women), but not so typical since this story doesn't deal so much with things most readers have come to expect like ballrooms and the ton.

I have to admit first that I was a bit frustrated with the hero and heroine.  They've been friends since childhood, but suddenly find it impossible to talk to one another? This was a story with a misunderstanding (or two) that could have been cleared up easily with an honest conversation.  However, given their behavior at the beginning of the story that shoves a wedge between them, I suppose it's somewhat understandable.

Still, I found the hero, Elijah, and his brother, Henry, completely real and charming and enjoyed every scene they were in (together and separately).  Amelia made me a bit crazy and I wanted to shake her several times, but she redeems herself eventually and honestly, the romance was sweet and touched my heart.  I'm always a sucker for the friends to lovers trope.  The author's skill with words is never in question, and she creates scenes we can see clearly in our minds with deft description and clear, realistic dialogue.

While this was apparently part of a series, I never felt lost or as if I were missing something.  It stands alone quite well.

If you are looking for an adorable historical romance with a touch of intrigue, and one that can be read in one or two sittings, then I recommend His Jilted Bride.  I eagerly look forward to Henry's story. He nearly steals the show in this book!