This post is part of a virtual book tour organized by Goddess Fish Promotions. Hawk MacKinney will be awarding a $20 Amazon/BN GC to a randomly drawn winner via rafflecopter during the tour. Click on the tour banner to see the other stops on the tour.

A landowner-rancher, raises Herford and Angus cattle and uses quarter horses—best in thick scrub ranges and brush—to corral and herd. A farmer, produces feed for the animals and food for the two-legged ones. The owner of sprawling lands of timber, harvested and replanted to restore habitats & endangered ecosystem—plants AND animal. Disapproves of new-money showy ostentation. Knows 15min of spotlight fame is the icing on the cake; the real work of painting pictures with words occurs in the solitude of the cave on Mars. Brooks no violations of his Man-Cave on Mars; does not suffer deceit and untruths of any sort. When words and actions don’t match, the words are false. His word is his bond. Considerate of those less fortunate.

In Hidden Chamber of Death, SEAL Craige Howelle Graeme Roynane Ingram has completed USNavy/SEAL active duty commitments. Along with several charities, he is a pick-&-choose part-time PI, and Trustee of Ardochy Manor and the estate of the late eccentric dowager Theosia Ambarella McGiffern. Craige soon uncovers estate discrepancies, banking conspiracies, deception, blackmail, and larceny hiding a madman's frenzied trail of murderous lust…and one very captivating young widow, Terry Stanley. He attempts to protect Terri and her teenage son before there are more dead bodies…including his own. The perp or perps are motivated by sensual twisted pleasure. Thwarted at every turn and frustrated, Craige’s instincts and those of his local across-the-river homicide investigator SEAL-bud acquired during their active duty are tested to the edge of a very close stalking death. A twist on keeping your friends close; keep your enemies closer…if you know who they are.

Over several scenes in different titles the developing closeness between Craige and the young widow, Terri Wofford Stanley and her son…serial characters in the Moccasin Hollow Mystery Series titles.

If you could trade places with one of your characters, who would it be?

He works alone and undisturbed in his morgue much like a writer in a room buried among stacks of book and papers and antique spider webs snuggled with dust bunnies. Fred relentlessly digs and distills the forensic minutiae of natural causes and felony skullduggery down to its picky parts-&-pieces. Probing the obvious, matching it with the mundane, puzzling together puzzles and oft-twisted secreted conundrums…or the fumbled mistakes by perps. Except for a sinister caveat, fumbled mistakes with a psychotic can be tranquilly fatal. Psychotics are neither insane nor demented; they make their own rules. No one else matters. We see it daily, hourly…all around us in our civilized societies. Educated or not, psychotics are highly intelligent with a heavy dose of cocked-&-loaded paranoia, and if cornered are beastly aggressive in unexpected of ways. They are bottomless wellsprings from which to concoct perps, and they readily enjoy confounding and killing adversaries with devious MOs.

Hidden Chamber of Death is a compelling tale of intrigue, murder, deception and suspense that leads retired Navy SEAL/part-time private investigator Craige Ingram in search of the connection between seemingly random murders and a banking conspiracy. Working with the local homicide investigator, who just happens to be a former Navy buddy, Craige Ingram's attempts to protect a lonely widow and solve the case before another person dies are only thwarted by a psychotic killer whose motivation is based on pure depraved pleasure. In this first book of the MOCCASIN HOLLOW MYSTERY SERIES, the instincts and skills Ingram and his buddy acquired as Navy SEALS are tested to their limits.

Years later, Grannie’s death turned his world upside-down. He still remembered watching her coffin sink into the ground next to his parents and the terrible time he had afterwards. It wrenched his butt out of the Naval Academy, but Grannie was right again.

She’d often say, “Things be happenin’ like they should.

After several months of brooding, he and his high school bud, Graysen MacGerald, enlisted. He went through Navy SEAL BUD training where he learned a lot about himself, met some great people and acquired some bad habits, which he still had. Heavy sack time wasn’t one of them unless he had a tequila hangover or was snugged next to a hot body. That never happened on base—well, almost never.

Investments had paid off nicely. He’d added several large sections to Grannie’s place. She’d had a tough fight keeping her land from speculators pulling tax schemes to force it to auction. Some were her own kin. It wasn’t the first time Ingrams and Graemes faced that, and it wasn’t the first time backbiters reckoned wrong about Corinthia Ingram being easy pickings. She logged enough timber to pay the taxes and made damn sure riffraff, Ingram or otherwise, never set foot on Moccasin Hollow. Water and mineral rights were worth plenty then, and they were worth more now. Now and then, kaolin conglomerates pinged Craige about long-term leases, but it wasn't happening on Ingram land.

Craige's broker almost choked at the idea of his investing in Russian timber commodities. The seven-figure chunk of negotiable paper made his broker nervous. “You could lose it all, and they can be mean as snot,” he told Craige.

“Sometimes they have a right to be mean as snot.” It wouldn’t be the first time Craige’d done business with them, which he didn't reveal. He also didn’t tell him the Russians once had standing orders to shoot him on sight.

For a minute Craige thought he might have to administer CPR to this man, but the broker made the arrangements. Craige hadn’t planned on inspecting the properties till spring, but absentee landlords made for easy skimming. By being there he could make sure the cuts were from the selected sections. He wouldn’t be partner to slash and stripping whole mountains. Even with his inside contacts, it was a real eye opener. It’s never only about the money. 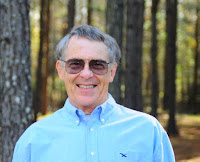 Internationally acclaimed author and public speaker, Hawk MacKinney began writing mysteries for his school newspapers. Following graduation, he served in the US Navy for over 20 years. While serving as a Navy Commander, he also had a career as a full-time faculty member at several major state medical facilities. He earned two postgraduate degrees with studies in languages and history. He has taught postgraduate courses in both the United States and Jerusalem, Israel.

In addition to professional articles and texts on fetal and adult anatomy, Hawk has authored several novels that have received national and international recognition. Moccasin Trace, a historical novel, was nominated for the prestigious Michael Shaara Award for Excellence in Civil War Fiction and the Writers Notes Book Award. This was followed by the Craige Ingram Mystery Series. In a change of direction, October of 2012 saw the release of Hawk’s first science fiction novel, The Bleikovat Event, in The Cairns of Sainctuarie series. Volume II in The Cairns of Sainctuarie series, The Missing Planets, was released in 2014 with Volume III in the works.

Hawk’s latest project focuses on The Moccasin Hollow Mystery Series. Book 1 in the series, Hidden Chamber of Death, was just released, and Book 2 in the series, Westobou Gold, will be released in the fall.