This post is part of a virtual book tour organized by Goddess Fish Promotions. Libby will be awarding a $50 Amazon or B/N GC to a randomly drawn winner via rafflecopter during the tour. Click on the tour banner to see the other stops on the tour.

Although I live in Chicago now, I grew up in Washington DC (yes, right in the city), so some of these “events” take place there.

1. I went to National Cathedral School for girls in Washington from 7th through 12th grade. Luci Baines Johnson, LBJ’s daughter, was two years ahead of me. It was an NCS tradition that one class would host another class at a student’s home, so Luci “volunteered” her house when it was her class’s turn. All of us received engraved invitations, dressed up in our best tea-time outfits, and took buses down to the White House. We met Luci’s “parents” and were treated to a special White House tour. Some of the girls took toilet paper home with them as a souvenir, but I decided to LEAVE a souvenir instead. I’d been chewing gum (subtly… of course, it wasn’t allowed) and as we were strolling into the Blue Room, I wadded it up and stuck it behind the door jam. Really.

Ten years later, I was back on the same tour with some friends from France. As we walked into the Blue Room, I surreptitiously reached behind the door jam. The GUM WAS STILL THERE.

2. In sixth grade I was still in public school, and I had a friend who lived downtown near some of the monuments. I used to take the bus down to visit her regularly, and we’d explore the Washington Monument, Lincoln Memorial, Capitol Hill, and other places. One day we were behind the Capitol building and she whipped out a pack of cigarettes, pulled out one for her and one for me. We smoked them. It was my first time. I became deathly sick, to the point where the Capitol police came over to ask what was wrong. I—um—told them I had an upset stomach, and they encouraged me to go home. I did. 3. In February 1964 the Beatles came to Washington for the first time ever. It was a snowy day and school was dismissed early. My friend and neighbor knew they were staying at the Shoreham Hotel, which, as fate would have it, was only a block from my house. After school we ran down to the hotel, thinking we’d gently stalk them. Wrong. The place was crawling with police and security. A bunch of screaming teenagers were waiting at the front of the hotel, so we ran around to the back entrance. Sure enough, a few minutes later a limo pulled up and the Beatles got out and entered the hotel. So that was pretty cool. But then my friend said a family friend lived on the 7th floor of the hotel (Back then people sometimes did live in hotels). So we raced up the elevators. As soon as we got off we were stopped by two cops. My friend told them we were visiting “Miss Smith in 706” and they had to let us pass. Suddenly at the opposite end of the hall, another set of elevators opened, and the Beatles emerged. I took off down the hall and managed to catch George Harrison before he disappeared into a suite and asked him for his autograph. He said to me five words I will never forget. Are you ready? They were: “Do you have a pencil?”

4. “I hate to write but I love having written.” The late Dorothy Parker, a famous New York writer and satirist, said it, and I agree. Writing fiction is the hardest thing I’ve ever done. I am always second-guessing myself and disparaging my work. It’s “workmanlike” I say to myself, but couldn’t it “sing?” Rarely am I ever satisfied with my output. So much so, that when I’m facing an empty screen, I’ll procrastinate and do ANYTHING to keep from writing. I really don’t know how I wrote my last 3 or 4 novels. I must have been under a spell. The key, I’ve found, is to somehow silence the internal editor’s voice. When I am able to do that, albeit infrequently, the writing goes more smoothly. I try to embrace Annie Lamott’s advice in Bird By Bird, (which, btw, I highly recommend to writers) that our goal should be a “shitty first draft.” Only by allowing ourselves to write ugly can we later go edit that prose and make it better. Like I said, I’m trying. 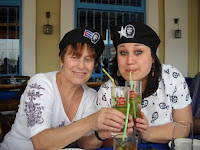 5. I’ve always had a secret love affair with Cuba. When I was a little girl, my parents used to fly to Havana for a long weekend to gamble and do who knows what. In those days, Cuba was ruled by Batista who had a very close “friendship” with Meyer Lansky, one of the Mafia chieftains who ran Havana. But then, there was a revolution! And Fidel Castro came to power. And he WASN’T our friend. In fact he was cozying up to the USSR. And he advocated a strict communist state. After hearing so much about Castro from our side over the years, I was fascinated with communism. I was still pretty young but I was curious. How did it work? Did kids still play outside? What did they eat for dinner? Did they have TV? When they played baseball, did they have the same rules we did? Then there was the Bay of Pigs fiasco, and 18 months later the Cuban Missile Crisis. Cuba was off limits to Americans. Which only made it more alluring. I wanted to visit. Well, in 2012, I finally did. I took my daughter and we were on a tour for 10 days. It was wonderful! I’ve written extensively about it on my own blog (here and here, for example) , and wrote a historical thriller, HAVANA LOST, as a result. Now I can safely say it’s an itch that has been scratched. 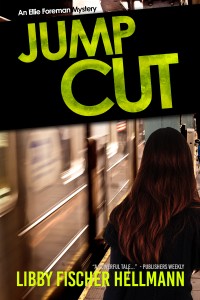 Chicago video producer, Ellie Foreman, has been absent from thriller author Libby Fischer Hellmann’s repertoire for almost a decade. Now she’s back...and soon entangled in a web of espionage, murder and suspicion that threatens to destroy what she holds most dear. Hired to produce a candyfloss profile of Chicago-based aviation giant, Delcroft, Ellie is dismayed when company VP Charlotte Hollander, the architect of a new anti-drone system for Delcroft, trashes the production and cancels the project. Ellie believes Hollander was spooked by shots of a specific man in the video footage. But when Ellie arranges to meet the man to find out why, he’s killed by a subway train before they can talk. In the confusion, she finds a seemingly abandoned pack of cigarettes with a flash drive inside that belonged to the now dead man.

Ellie has the drive’s contents decrypted, but before long she discovers she’s under surveillance. Suspecting Delcroft and the ambitious Hollander are behind it, she’s unconvinced when Hollander tells her the dead man was a Chinese spy. Ellie and her boyfriend Luke try to find answers, but they don’t realize how far into the dangerous echelons of hidden power they have ventured. When Ellie’s daughter is kidnapped and Charlotte Hollander disappears, it becomes terrifyingly clear that Ellie is in way over her head, and more lives are on the line, including her own.

Before my gangstah-rap neighbor emptied his AK-47 into his buddy, the most exciting thing to happen in our village was the opening of a new grocery store. The store hired a pianist who played Beatles tunes, no doubt to persuade shoppers to part with their money more easily. My neighbor, rapper King Bling, was helping his fans part with their money too, but the shooting ended all that. Once he made bail, he moved and hasn’t been heard from since.

And so it goes in my little corner of the North Shore, about twenty miles from downtown Chicago. There are benefits. The King, as he’s known to his disciples, gave our cops something to do besides ticket speeders. And the new grocery store gave me the chance to buy prepared dinners so I could dispense with cooking.

Both of which come in handy when I’m producing a video, as was the case now. We didn’t finish the shoot until seven. I raced up the expressway toward home, dropped into the store, and was eyeballing a turkey pot roast—the only one left—when my cell trilled. I fished it out of my bag.

“Mom, where did you get the shoes?” I heard chatter and giggles in the background.

“The ones you gave Jackie.” My daughter, Rachel, had successfully, if unbelievably, graduated from college and lived in an apartment in Wrigleyville. Jackie was her roommate. “Everybody thinks they’re awesome.”

About the Author:Libby Fischer Hellmann left a career in broadcast news in Washington, DC and moved to Chicago 35 years ago, where she, naturally, began to write gritty crime fiction. Twelve novels and twenty short stories later, she claims they’ll take her out of the Windy City feet first. She has been nominated for many awards in the mystery and crime writing community and has even won a few. * 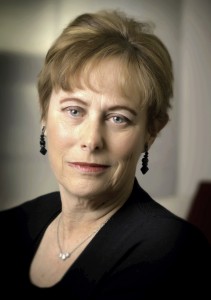 With the addition of Jump Cut in 2016, her novels include the now five-volume Ellie Foreman series, which she describes as a cross between “Desperate Housewives” and “24;” the hard-boiled 4-volume Georgia Davis PI series, and three stand-alone historical thrillers that Libby calls her “Revolution Trilogy.” Her latest release, The Incidental Spy, is a historical novella set during the early years of the Manhattan Project at the U of Chicago. Her short stories have been published in a dozen anthologies, the Saturday Evening Post, and Ed Gorman’s “25 Criminally Good Short Stories” collection.

* She has been a finalist twice for the Anthony, twice for Foreword Magazines Book of the Year, the Agatha, the Shamus, the Daphne and has won the Lovey multiple times.
Website: http://www.libbyhellmann.com/