This post is part of a virtual book tour organized by Goddess Fish Promotions. Blair Yeatts will be awarding a $25 Amazon or Barnes and Noble GC to a randomly drawn winner via rafflecopter during the tour. Click on the tour banner to see the other stops on the tour.


Five Things You Might Not Know About Blair Yeatts

I was only four, but my parents never let me forget. It bordered on the unforgiveable sin, since my mother’s lemon meringue pie verged on sacrament. She grated lemon rind until the whole house smelled of lemons, and then pressed the lemon halves down over the glass juicer, collecting juice like nectar, enough to make your mouth twist in a helpless pucker of ecstasy, even mixed with milk and eggs. The pie pan stood ready: pulverized vanilla wafers and melted butter pressed into a crust. After saying some mysterious spell over insignificant egg whites, my mother turned on the mixer, scooped the fluffy mass into the pan, and slid the masterpiece into the oven. As the daughter of the house, I bore the first huge slice to my father, who sat at the head of the table. I took the plate carefully, turned toward the table, raised the pie slice on one hand, just like a waitress . . . and slammed the plate against the wall. Lemon pie oozed down the paint in deadly silence. Until my father’s bellows began. I can still hear them. But my punishment burns in memory: “Consider that piece your share,” he growled, and said no more.

I was a child, and the statute of limitations has run out, so I’ll confess. I went on a crime spree with the little girl across the street when I was six. We crept outside in the heavy heat of a Sunday afternoon, armed with roofing nails. I suspect she was angry with her father, because we approached his car first. Very carefully, we stood the nails upright, pressed firmly under the tire, front and back, so that whichever way the car rolled, the nail would find its mark. We set nails beneath one tire of every car on the block, and were immensely gratified by the epidemic of flat tires next morning. But we never said a word, and it remained a mystery—to this day.

I was 13 when my parents planned a day’s hike into—and out of—the Grand Canyon. Summer temperatures in the canyon hung around 115, and Bright Angel Trail was 20 miles round-trip. My father filled two of our canteens with grape juice rather than water, so we were vomiting and dehydrated by the time we reached the river. Did you know that the USPS kept extra beds and mules at Phantom Ranch (on the Canyon bottom) just for idiots like us? My father and brother had to walk out next day, because there were only two spare mules. But we never decided who suffered more—my father and brother from blisters on top of blisters and outraged muscles, or my mother and I, from saddle sores, blisters and two entirely different sets of outraged muscles.

My first summer out of college I went to a rock festival near Atlanta. Mostly I remember the heat—and the mud holes (normally little ponds, but with 1000 or so overheated rock fans, mud). Skinny-dipping in a coat of mud became part of the day. Unfortunately, as soon I climbed out of the hole with my mud, I fainted. Everyone gathered around, full of concern. I got up . . . and fainted again. Three times. I’ll always have that niggling question in my mind: what must I have looked like, mud-coated, sprawled naked, and unconscious in a Georgia cow pasture?

I was driving through Joshua Tree National Monument—infamous for peculiar vibes—when I stopped at a sign for a scenic overlook. I’d noticed a raven keeping pace with my car ever since I entered Joshua Tree, flying and landing and flying again, always right alongside me, but when I stopped he disappeared. I followed the path where the sign pointed, but within 50 yards it vanished. Common sense would have had me turning back, but I kept on, clambering over rocks until I was thoroughly lost, down low in a chaos of twisty little tracks and high boulders—with no water or hat. I was settling into some serious panic when “my” raven reappeared. Ok, some raven. I couldn’t swear it was the same one. He quorked at me from a boulder until I got up and followed where he led—out of the boulders and up onto a high ridge that I hadn’t been able to see . . . overlooking the road. He flew off at that point, but swooped down across my windshield as I was leaving.

Bad religion can be deadly. So Miranda Lamden, small-town religion professor, discovers in This Madness of the Heart. The dark hollers of Eastern Kentucky offer fertile soil for shady evangelist Jasper Jarboe, new president of Grace and Glory Bible College, as he beguiles the small mining town of Canaan Wells with his snake-oil charm.

When Miranda isn’t teaching at Obadiah Durham College, she’s investigating paranormal phenomena—or enjoying a turbulent romantic relationship with backwoods artist Jack Crispen. JJ’s inquisition-style gospel has alienated her long since, but when he announces his plan to transform her forest home into an evangelical Mecca, complete with neon cross and 40-foot Jesus, Miranda girds her loins for war. But JJ isn’t finished: he goes on to launch an attack on her friend and fellow professor Djinn Baude with an avalanche of vicious rumors. Not only does he accuse Djinn of demonic communion with the old Voudon witch whose curse killed the college’s founding family, but he also smears her with insinuations of lechery and vice.

With JJ’s urging, hate boils over into violence and tragedy, sweeping Miranda up in its flood. One death follows another as a miasma of evil overwhelms the tiny community, and only Miranda can see clearly enough to halt its spread.

This Madness of the Heart is the first in a new series of Gothic mystery-thrillers featuring Professor Miranda Lamden, whose spiritual gifts have drawn her beyond university walls to explore the mysteries of other world beliefs. Her unique vision brings her into repeated confrontations with evil, where too often she finds herself standing alone between oblivious onlookers and impending disaster.

The night turned around her, until, in the darkest watches before dawn, she rose from her knees, abandoning the bloody altar with its guttering candles. A queen entranced, she paced slowly down the hill toward the sleeping house, her eyes blind with visions. Through the front door she walked, into the hall’s center, to the foot of the great staircase. There she raised her bloody hands and cried aloud in a high-pitched wail, sinking at last to a low hissing hum.

Like a snake swaying on its coils, a tendril of smoke emerged from the darkness, swelling and growing, rising and twisting toward the upper floors of the plantation house. Tiny rainbow-hued flames licked at the polished floor. Then, with a screaming roar, fire like a spider’s bloated body engulfed the great hall, swallowing the keening woman and gathering the curving staircase to its tumid breast. A billowing inferno exploded into the long upper halls, curling and crisping the fine imported wood, sealing bedroom doors with sucking flame, feeding on the agonized cries within: a holocaust offered to a vengeful deity, sated at last with the charring bodies of the landowner’s family... the whole family, save one, a tiny boychild, carried sleeping from his father’s house by an old black nurse, terrified by the fiery havoc she had witnessed in her dreams. 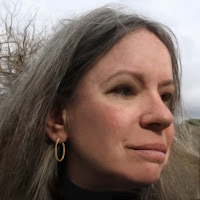 Blair Yeatts grew up in the midst of a large, old southern Virginia family, much like the family of her main character. She followed her parents into a career in academia and taught religion at the college level in Kentucky for many years. Her special areas of expertise are psychology and Earth-based religions, in which she has done considerable research.

From childhood, Ms. Yeatts has been a fan of mystery fiction, starting with Nancy Drew and moving through Agatha Christie to twentieth century giants like Dorothy L. Sayers, P.D. James, and Nevada Barr. She is fulfilling a life’s dream in writing her own mysteries.

Ms. Yeatts shares her home with her photographer husband, two cats, and a dog. She has a lifelong love of wild nature, and prefers to set her stories in rural areas, where threads of old spiritual realities still make themselves felt. Her first three books take place in different parts of Kentucky and Tennessee.

Buy the book at Amazon or get it for FREE from Smashwords.