This post is part of a virtual book tour organized by Goddess Fish Promotions. Denison Hatch will be awarding a physical copy of the Jake Rivett Series, Flash Crash and Never Go Alone, (US ONLY) to a randomly drawn winner via rafflecopter during the tour. Click on the tour banner to see the other stops on the tour.

"Never Go Alone is an explosive return for both Denison Hatch and his hero." - BestThrillers.com

A rash of elaborate cat burglaries of luxury buildings in Manhattan has the city panicked.

When a group of social media obsessed millennials--a loosely organized crew that call themselves "urban explorers"--are suspected in the heists, undercover NYPD detective Jake Rivett is assigned the case.

Rivett dives deep into the urban exploration scene in pursuit of the truth. But what, and who, he finds--deep in the sewers, up in the cranes above under-construction skyscrapers, and everywhere else in New York--will change not only Jake, but the city itself.

Jake paced along the familiar corridors of One Police Plaza. He padded across the detective bullpen and past his old office. A clean-shaven man, about his own age, stared back blankly at Jake. Rivett didn’t even recognize the guy who now occupied his former workspace. That wasn’t the nature of most police departments, but it certainly was in New York. The volume of crime was astronomical and the volume of new detective recruits equally high. In fact, many beat cops spent their entire careers trying to become detectives, only to burn out or transfer out within a handful of years. Jake had once been a boy in blue as well. He’d spent the minimum time required—two years—out in a patrol car. He’d gotten his gold shield ten months after that; primarily due to the sources he’d managed to scrounge up while on patrol in Chinatown. While Jake’s ability to measure people was strong, his ability to split them open was legendary. As was his chutzpah. He was like a pit bull when it came to everything, cases not excluded. That was why, during his first few years as a detective, not a single one of his cases went unsolved. But his discipline was another thing altogether. The department was half squares and half circles, but he was four-dimensional. It was a simple as that. 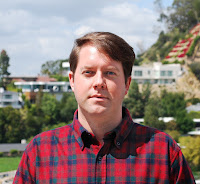 Denison is a screenwriter and novelist. He has a number of feature and television projects in development, including his original screenplay, Vanish Man, which is set up at Lionsgate. A graduate of Cornell University, he lives with his wife and a big dog in a little house in Hollywood. He is presently working on the third Jake Rivett thriller.

a Rafflecopter giveaway
Posted by MJ Thomas at 5:55 AM