This post is part of a virtual book tour organized by Goddess Fish Promotions. John Herrick will be awarding a $10 Amazon/BN GC to a randomly drawn winner via rafflecopter during the tour. Click on the tour banner to see the other stops on the tour.

Hello readers! The crew at It’s Raining Books asked me to share five things readers might never guess about me. So, jumping at the chance to spend a few minutes with you—and quite possibly embarrass myself—here we go!

1. I’m a paranoid writer. I never allow anyone to read what I’ve written until the first draft is done. I won’t even tell anyone what the book is about until I have the first draft in hand. As a kid, I dreamed of writing novels. But when you’re young, you don’t know how to accomplish a long-term goal. I’d get bored and “put the novel on the shelf for a while”—which became each project’s kiss of death! No matter how many books I’ve written, I’m always scared I won’t finish. And that, my friends, leaves me paranoid.

2. I won a TV game show when I was 11 years old. The local show was called DB’s Delight, which aired Saturday mornings in the mid 1980s. I even featured a character named DB, which was really a guy who hid underneath a table and shoved his hand up the DB puppet to make him talk. Each week, a group of sixth graders from a local school would come to the studio of the local CBS affiliate, and four kids would compete in an educational trivia show. I won my round and the winner’s round that day, and the prize was two tickets to Six Flags. I still have the show on VHS tape, which is probably the only copy in existence, and it will NEVER see the light of day. Why? Simply put, I was such a nerdy looking kid. Big 1980s eyeglasses with the plastic frames, hair that was messed up by the time we went on TV, probably some dandruff on my shoulder. No joke. (Now I might burn the tape. Hmm…)

3. I seem to have a knack for writing love stories, but in real life, I might just be the worst date you’ve ever had. Okay, enough said there! Seriously, though, I’m not good at playing games. I want to be honest on a date and I think that freaks people out. (That reminds me. Never date someone you work with. Long story.)

4. I had a obsessive-compulsive tendency as a kid. I kept it hidden well, but I would do something or repeat something to myself four times. That was my thing. Four times. When I was 15 years old, I decided I would break that habit. So whenever I wanted to do something four times, I purposely did it 3 times—until my new habit became to do or say things three times. Somehow, I outgrew the tendency. Praise God for that—no joke there. I was thankful for the freedom.

5. I’ve always been a night owl, but I do my best work early in the morning. Like many (or most) authors out there, I have a full-time job during the day. When I started writing novels, I worked on the books for a couple of hours before bedtime. That worked well at first—until I lost my joy in writing. After working all day, I didn’t feel like showing up to start working again at night on books. Plus, I started going to bed later and later because I’d hit my stride and refuse to stop. That meant less sleep at night, which left me more tired. I So I got creative: What if I rearranged my daily schedule, and started my day doing what I love, giving it my first and best? I tried that new schedule when I wrote Between These Walls. It changed my life. I no longer viewed sleep as an enemy. Moving immediately from book work to career work prevents my body from taking a break, which means no more motivating myself for a second round of work. And best of all, I get to watch the sunrise every day!

Thanks for the opportunity to stop by spill my guts here! If you’re interested in reading a romantic comedy that comes from a mind as messy as that, I hope you’ll check out Mona Lisas and Little White Lies. 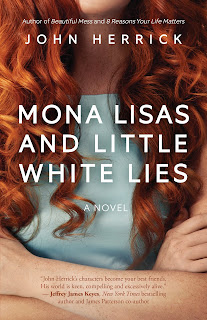 Lily Machara is a wisecracking auto mechanic. She’s never cared for glitz or drama. But when Ryder Flynn, a rising star in the world of commercial art, adopts Lily as his muse after a random sighting, Lily discovers herself painted into his hot new pieces … and becomes America’s newest — anonymous — celebrity.

The only problem: The woman Ryder imagines isn’t the true Lily.

Now, as Lily and Ryder give in to mutual curiosity and a budding romance, Lily’s life — secrets and all — fall victim to a pop culture with one question on its mind: Who is the woman in Ryder Flynn’s art?

In the spirit of Cyrano de Bergerac and Pretty Woman, MONA LISAS AND LITTLE WHITE LIES is a delightful new romantic comedy from John Herrick, bestselling author of Beautiful Mess.

Lily considered the man handsome with his firm jaw and wavy, brown hair. In fact, he had one of those faces which could, with one glance, render you at ease. She sensed instant comfort in his presence. He also had the sort of appearance that made you feel as if you had met him before.

And Brooke was right. The woman looked exactly like Lily. Her hair color, complexion, nuances in her face and fingers—Lily recognized them all.

Brook leaned over her shoulder. “See what I mean?”

“Yeah…” Stunned, Lily examined the woman closer but couldn’t find the words to speak. An honest-to-goodness lookalike! Yet somehow, that red dress and fancy environment had transformed her into a different person altogether. The change had escorted her into another world!

Even though this woman was a fictional character, Lily tried to imagine her background and what she did for a living. The superficial differences between Lily and this woman were obvious, but Lily knew something else must have come into play between a couple like this. What did this woman have that Lily didn’t? What would draw this particular man to this particular woman?

A hint of jealousy stabbed Lily’s heart, but she shoved the feeling aside.

Before she knew it, Lily pictured herself in the woman’s place—which wasn’t difficult, given the similarities.

She imagined the floral scent of that wine…

The brush of the red dress against her thighs…

His arm around her waist…

What am I doing?!

Lily snapped the magazine shut and tossed it on the dining room table. 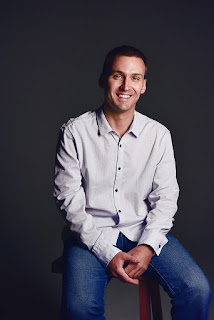 John Herrick is best known as a chronicler of the human heart. His complex characters and earnest tone prompted Publishers Weekly to write, "Herrick will make waves." When he is not writing, he loves long drives on the interstate. He is a sucker for 1990s music. Herrick lives in St. Louis.

In addition to novels such as BEAUTIFUL MESS and FROM THE DEAD, he authored the nonfiction bestseller, 8 REASONS YOUR LIFE MATTERS.

You can find John online at: