A Change of Heart by Barbara Longley -- Review and Giveaway 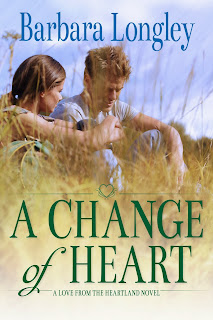 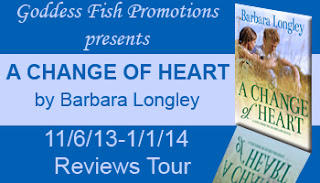 This review is done in conjunction with a virtual book tour organized by Goddess Fish Promotions. Leave a comment, or ask the author a question, for the chance to win 1 of 4 $10 Amazon gift cards. Click on the tour banner to see the other stops on the tour.

Cory Marcel worked tirelessly over eight grueling years to develop a successful military career. After her commanding officer violently assaulted her, she lost everything—especially her trust in people. Despite the emotional damage threatening to sink her, Cory agrees to accept a new job at a furniture store in Perfect—a job that could offer the fragile brunette the chance to start over.

Ted Lovejoy cofounded Langford & Lovejoy Heritage Furniture, but lately he feels like an outsider in his own business. When he meets Cory, Ted realizes his company can do more than just build furniture—it can also help rebuild lives. He longs to help Cory recover from her pain, yet every time he gets too close to her heart, she pushes him away.

While Cory can’t resist her attraction to Ted, she fears the demons haunting her will drag down both of them. Could this kind, soft-spoken man help her finally bury the past…and unlock a future full of hope and happiness?

I really enjoyed this book about getting through the bad stuff with the help of some wonderful friends.  Truly, the cast of characters in this book are what made it special.  It's not that I didn't enjoy our hero and heroine, because I absolutely did, but this book is really about a group of folks who felt so real, I'd know them if I passed them on the street.

Ms. Longley has a great skill for story-telling and making a reader care.  She breathed life into these folks and gave them real problems and flaws.  PTSD isn't a simple thing to write about, and if you consider that half the characters in the book suffer from it in one form or another, you have an even more difficult task. The author was up to the challenge.

It's clear this is part of a series as there are couples who are newlywed, or expecting children and I could tell that they were from earlier books. However, that doesn't mean I was lost or this book lacked something.  It didn't. Though I expect readers of the previous novels will enjoy this book even more than I did.

The romance is sweet and tender.  The one person in the book with few flaws is our hero, Ted.  But he needs to be nearly perfect in order for Cory to trust him (eventually).  He's what I'd call an "Omega" male -- not alpha, but not really beta either.  He's strong, but not pushy or aggressive.  He's handsome, but not overly so.  He's intelligent, but not a nerd.  He's just the perfect person for Cory.

Overall, this was an enjoyable read. It had its ups and downs, and the occasional draggy spots, but it really didn't matter much to me.  I fell in love with the town and its population and can't wait to revisit.

“I can’t believe you did it again,” Ted shouted, plowing both hands through his hair. “You swore I would be part of the hiring process. You swore.” He glared at Noah.

They had twelve employees now, split between two shifts. With the exception of Paige, all of their staff belonged to the same exclusive club, sharing the bond of brotherhood their veteran status gave them. Ted didn’t belong. He was an outsider in his own business, a company that had been his idea from the start.

No one seemed to care that he was the Lovejoy part of Langford & Lovejoy Heritage Furniture. Despite half ownership and being the human resources director to boot, Noah continued to make staffing decisions without conferring with him first. That cut him deep, and in this case, completely severed his last straw.

“This was an emergency call on my part.” Noah widened his stance and crossed his arms in front of his chest—his commander stance. “Besides, I never swore. I said I’d try to follow the hiring procedures, and for the most part I have. Cory is an exception. We talked about it, and you agreed we need someone to take over the web maintenance, social media and order processing. I’m adding shipping to that roster, which will ease up your load considerably. You can spend more time in production, which is what you said you wanted.”

“That’s beside the point. Did you post the job? Take Applications? How about an interview with me included?” Restless and edgy, Ted couldn’t shake the feeling that it might be time for a change. Langford & Lovejoy flourished, while his discontent grew by leaps and bounds.

“Hey, kid. What’s got your boxers in a bunch?” Ryan strolled into the conference room for their usual Monday morning meeting. “We could hear you shouting from the first floor.”

“Maybe it’s the fact that you and everybody else around here still see me as a kid. It’s damn insulting,” he shouted again. “I have a masters in business administration, and I sign your paycheck.”

Paige waddled in behind her husband, rubbing her distended belly. “Watch your language. I don’t want the baby to pick that stuff up.”

And there it was, the other exclusive club he couldn’t gain entrance to—the happily married and reproducing group. Ryan and Paige had just finished building their house on the west side of town and were expecting their first child. Noah and Ceejay were also expecting. This was number four for them. Ted rolled his eyes. “I doubt that pea in the pod is paying any attention to what goes on here.”

“They do.” She laid her folder on the table and settled into her chair. “Babies can hear things.”

“Whatever.” He took his customary place with his back to the door. Something he always did out of deference to Noah and Ryan, who both coped with PTSD. They had to have their backs to the wall, and Ted didn’t care where his back faced either way. “Noah hired someone without consulting with me first. We’ve been having the same argument for five years now, and my bungee cord is just about out of stretch.”

He’d worked his ass off to get through school, worked around the clock to grow their business into a thriving success. What did he have to show for all that sacrifice? He’d become a twenty-four year old workaholic with a healthy savings account and pockets full of nothing but loneliness. No one respected or included him. He hadn’t even taken a vacation in all that time, and he was worn to a stressed out frazzle. Did anyone bother to notice? Nope. “I don’t care if this Cory guy is a freaking genius. You had no business hiring him without my say so,” he snapped.

“I’m sorry. Maybe I should leave,” a soft feminine voice said from behind him. 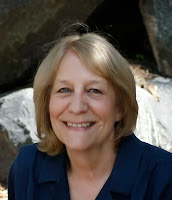 As a child, award-winning author Barbara Longley moved frequently, learning early on how to entertain herself with stories. Adulthood didn’t tame her peripatetic ways: she has lived on an Appalachian commune, taught on a Native American reservation, and traveled the country from coast to coast. After having children of her own, she decided to try staying put, choosing Minnesota as her home. By day, she puts her master’s degree in special education to use teaching elementary school. By night, she explores all things mythical, paranormal, and newsworthy, channeling what she learns into her writing. Barbara loves to hear from readers, and can be reached through her website: http://www.barbaralongley.com, Twitter, Facebook, or Goodreads.
Posted by MJ Thomas at 4:00 AM