Scoundrel for Hire by Adrienne deWolfe -- Excerpt and Giveaway 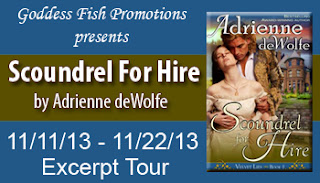 Raphael Jones is a Kentucky-born scoundrel, who has never played by the rules. When Colorado mining heiress, Silver Nichols, hires him to stop her precious daddy from marrying a golddigger, Rafe sets out to seduce Silver and win her fortune.

But beneath Silver's cool veneer, Rafe encounters a sweet vulnerability and an aching secret that threatens to send his whole world up in smoke.

Now the wily scoundrel must choose: walk away or wager the one thing he can't afford to lose—his heart.

The lantern light glanced off glittering spires of crystal. Iridescent with shades of rose, green, and blue, these spikes rose from the cave floor and plunged from the ceiling like fangs in some sleeping giant's mouth. The cavern was massive, perhaps the size of Silver's mansion, and the river that snaked through its center bubbled like some medicinal hot spring.

"It... it's beautiful," Silver whispered uneasily, watching the play of light across this otherworldly landscape.

Rafe nodded weakly, wiping his sleeve across his bleeding temple. The stalagmite he braced himself against was moist and cool; resting there was an insidious temptation. The steam from the underground river made breathing hard, even harder than the dust in the caved-in mining shaft above. He felt light-headed.

"Rafe, perhaps you should rest—"

"No," he said quickly, thrusting himself up and away from the rock. The last thing he needed was an argument about his condition. He didn't have the stamina for it. He had to get her safely above ground. Besides, how could he tell her that if he closed his eyes, he might never wake up again?

Tavy's bark echoed somewhere to their left. Summoning his strength, Rafe caught Silver's hand and hurried her in that direction. Falling water could be heard roaring on the other side of a wall.

"The river seems to go through a tunnel," Silver panted, leaning as far over the bank as she dared. "I can't tell how far, but with the waterfall so close, the tunnel can't be too long... can it?"

Tavy's chirping rolled across the water. Once again, the otter pup climbed up onto the river’s bank, shaking her fur. She waddled to each of them in turn, giving them a snuffle and a kiss. Rafe's throat swelled. Even Silver looked misty-eyed. Then Tavy galloped to the edge of the river. Holding their breaths, they watched in uneasy silence as the otter baby, fearless in her element now, dived and let the current sweep her under the mountain.

Silver hugged her arms to her chest and turned anxious, luminous eyes to him. "She made it, Rafe. I know she did."

He nodded. There was nothing more to say. Whether Tavy made it or not, they had to make the same journey. They had no choice.

He kicked off his boots. "Don't give up, Silver. Whatever happens, you keep swimming, all right?"

She bit her lip. Even so, a tear spilled down her cheek. She'd been so incredibly brave in the aftermath of the cave-in. He knew she was terrified, and not just for him.

"We can rest first—"

"No." He smiled. It was the sort of smile he'd honed over the years: cocksure, devil-may-care. He was afraid if he didn't convince her to swim now, she never would, because she wouldn't leave him behind.

He met her gaze evenly, another tactic he'd learned for his cons. "It's better this way."

Her fingers shook in his hand. "Then you have to promise me you won't let go—"

In answer, he kissed her. He combed his fingers through her hair, and crushed her hips against his, and made love to her with his mouth. He would have breathed his last breath into her if it would have guaranteed that she'd make it to the surface alive. But she pulled away shakily, accusation glimmering through her tears.

Adrienne deWolfe is a #1 Bestselling Author and a recipient of 48 writing awards, including the Best Historical Romance of the Year. She consistently delights readers with sexy, action-packed, western-style romances, including her Wild Texas Nights series and her Velvet Lies series. In addition, she is the author of the bestselling non-fiction ebook series, The Secrets to Getting Your Romance Novel Published.

Fascinated by all things mystical, Adrienne writes a weekly blog about dragons, magic, and the paranormal at http://MagicMayhemBlog.com to help her research her upcoming YA Epic Fantasy series. She also writes a weekly blog with fiction writing tips and advice about the business of writing at http://WritingNovelsThatSell.com. She enjoys mentoring aspiring authors and offers professional story critiques and book coaching services.