This post is part of a virtual tour organized by Goddess Fish Promotions. One randomly drawn winner will receive a $50 Amazon or Barnes and Noble gift card at the conclusion of the tour. Enter via the Rafflecopter below. And, in addition, Ash's Fire is on sale during the duration of the tour for only $0.99! Click on the banner below to buy the book now, and click on the tour banner to see the other stops on the tour. 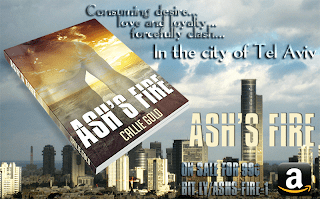 Smart and successful Attorney Jordan Cohen didn’t expect Sam, her husband and best friend, to invoke their old pact for non-exclusivity. But after twenty-some years together, he did.

When Ari is implicated in an execution-style murder, she wants to believe Ari is innocent, but one troubling fact after another keeps popping up. Jordan turns to the only man she can trust with her lover’s life – her brilliant criminal defense attorney husband.

Is Ari a killer?

When Ari is charged, Jordan fears the worst: a life sentence for her lover, exposure of her affair and the ruin of her law firm and irreparable damage to her husband’s reputation. But she can’t let go of Ari’s love…

With the trial just days ahead, Jordan races to save her lover, her husband and herself.

Desire, suspicion, love and loyalty all clash in the fast-paced Mediterranean city of Tel-Aviv.

“What I should have told you earlier,” Sam looked at her intently, “was that I need to explore some stuff on my own, and that I’m interested in going out with one of the exercise instructors from the health club. I’m not asking you for permission. I’m just letting you know because I don’t want to sneak around, behind your back. But I do need to do this, to see what it feels like.” All these incomprehensible words he blurted out in one breath, and then he took a sip from his glass and closed his mouth. Done.

“You want to fuck your gym coach?” she finally asked.

“From the health club I signed you up for? So you won’t lose what’s left of your muscle tone?”

“Answer my question,” she snapped.

“I want to have sex with another woman, yes,” Sam sighed.

Jordan saw the hunger in him.

“Spare me your clean-speak,” she said. She stared some more, her hurt rising like vapor from a radioactive swamp. “Why? What’s wrong with the sex we have?”

“Nothing,” Sam said, a little too quickly. “I just can’t live with the idea that you will be the last woman I ever sleep with. And the opportunity presented itself.”

“Opportunity presented itself?” Jordan said, anger solidifying into sharp crystals in her chest.

“Jordan, please. We’ve talked about this many times before. You were okay with it. It was your idea, actually, if memory serves.”

“Theoretical idea,” Jordan said. She knew he was right, but still.

“I don’t want to lie to you,” Sam said. “That’s just something we don’t do. And yes, I want to try something different, I need some variety. We have great sex together, but—”

“But what?” Jordan snapped at her husband of twenty-five years.

“But it’s the same. Has been for years. And I met this woman and she courted me and she’s attractive and we talked, and she invited me and I want to go.”

“So you said yes,” Jordan said, waiting to wake up wrapped in Sam’s arms.

Sam rolled the lazy liquid in his glass. Then he gulped what was left of it, put it on the coffee table. “I love you,” he said.

“Don’t,” she said, and curled tighter into her blanket.

“And I want to know you’re okay with this.”

“You want me to sanction it.”

“You petted me like a dog,” Jordan said, her eyes threatening to leak again.

“I’m really sorry, Jordan,” Sam said. “I should have just told you.”

Callie Gold is an Israeli married to an American. She admits that marrying her husband was the smartest decision she has ever made in her entire life. Together they have raised three beautiful children.

Callie is a lawyer, and a Jew, and what’s worse – an Israeli. That means that she’s an in-your-face kinda gal. There is no Hebrew word for ‘subtle’. Callie’s husband says that she has too many opinions, and he’s right. But she’s also open and friendly and very curious, and is known to start intimate conversations with the Falafel guy.

Since she stopped litigating, Callie’s husband says she’s become a much nicer person (Callie’s husband is almost always right, which makes living with him really good and seriously annoying, all at the same time).

When she’s not writing, Callie does divorce mediation and marriage counseling, which, she believes will save her a good seat in that place up there. She also cooks and bakes and you will always find home-baked bread in her freezer, next to the chocolate gelato that her husband makes.

Callie writes because writing creates another life for her, a life in which she can do whatever she wants. In order to write she has become a time thief.

Above all, Callie is a lover of people and she can never get enough of human interaction. So feel free to start up a conversation with her!