Portrait of Passion by Lynne Barron - Spotlight and Giveaway

This post is part of a virtual book tour organized by Goddess Fish Promotions. A randomly drawn winner will receive a $25 Amazon or Barnes and Noble gift card. Click on the tour banner to see the other stops on the tour.

What’s a Viscount to do when a mysterious lady with a secret past and a reputation frayed around the edges suddenly appears in London in hot pursuit of his naive young cousin, setting the gossips’ tongues wagging, stirring his family into pandemonium, and driving him mad with her irreverent ways?

If the Viscount in question is Simon Easton, the answer is quite simple. Seduce the beguiling lady. But Miss Beatrice Morgan isn’t your average tarnished lady. She’s lived a slapdash life wandering the globe like a gypsy, painting fantastical portraits of Duchesses as Sirens and landscapes featuring a crumbling old fountain, all the while harboring a secret desire to return to Idyllwild, the only home she’s ever known.

What Simon does not know is that Beatrice just might be willing to sacrifice her honor, her virtue, her very heart to reclaim Idyllwild.

Beatrice thought that had Abby been born into a different family, she would be making her debut soon, perhaps next year.

Instead she waited upon a dishonest, lying, scheming woman.

Bea could not hold back bitter laughter at the thought. Simon turned his head to look at her in surprise. Abby froze, her gaze flying to Bea’s face.

“You are a very pretty girl,” Bea said and watched the blush deepen on the girl’s cheeks.

“Thank you, miss,” she shyly replied, bobbing another quick curtsy.

When Bea only watched her silently, Abby looked to Simon, who gave her a subtle shrug, before she asked, “Is there anything else I can do for you, miss?”

“You may undress me,” Bea said.

“I would like Abby to undress me and brush out my hair,” Bea insisted. She forced herself to raise her eyes to his, unsure what they would reveal to him. She was confused, an awful feeling of desperation mingled with the banked rage and shame. Would he see?

Simon captured her gaze, his eyes dark, not angry, uncertain perhaps. She knew she was behaving irrationally. She did not care.

“Do not,” Bea said, waving her hands about in agitation. “Please, stay.”

Simon looked from her face to her hands, suspended in midair. She dropped them to her sides, clenched her fingers in her skirts, grabbing fistfuls of the dark silk.

Bea looked at Abby, standing as still as a statue, her eyes wide as she looked back. Bea realized that it was the first time the timid girl had ever looked her mistress in the eye. As if reading her mind, the maid tore her gaze away and bent her head down. 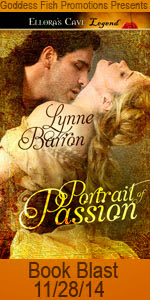 If you enjoyed the excerpt, Portrait of Passion is only 99¢ at Ellora's Cave, and only $1.99 from Amazon or Barnes and Noble.

About the Author:Write About What You Know.

Every Creative Writing Teacher and College Professor said these words to Lynne Barron in one form or another. But what did she know?

She knew she enjoyed the guilty pleasure of reading romance novels whenever she could find time between studying, working and raising her son as a single mother.

She knew quite a bit about women's lives in the Regency and Victorian era from years spent bouncing back and forth between European History and English Literature as a major in college.

She knew precious little about romance except to know that it was more than the cliché card and a dozen red roses on Valentine's Day.

Then she met her wonderfully romantic husband and finally she knew.

And she began to write.

Buy the book at Ellora’s Cave, Amazon, or Barnes and Noble.