This post is part of a virtual book tour organized by Goddess Fish Promotions. Kristine will be awarding a $10 Amazon/BN GC to two randomly drawn winners via rafflecopter during the tour. Click on the tour banners to see the other stops on the tour.

When the hunter becomes the hunted…who will become the ultimate prey?

CORE agent Lola Tam has two things on her mind, quitting her job as a criminal investigator and baking a frozen pie for Thanksgiving dinner without burning it. But a midnight call forces a change of plans. Her boss and future stepfather, Ian Scott, has been kidnapped from his Florida vacation rental—along with her mother. The kidnapper’s plan? Drop Ian and her mom in the Everglades and hunt them like animals. Terrified for her mom, Lola takes the bait and travels to Everglade City, Florida where she’s determined to end the hunt before it begins.

Ryan Monahan, former Navy SEAL turned airboat captain is used to taking tourists through the Everglades, not guiding a sexy agent on a rescue mission. After spending years dealing with a past filled with guilt and regret, he needs a little action and adventure in his life—he needs to prove he could still be a hero. What he doesn’t need? Falling for a woman he has no business wanting, especially when the hunt takes a deadly turn…

From the bad guy’s point of view, just before the hunt:

His prey stirred against the bald cypress. Not much, considering the way he’d tied the cords around their necks and torsos. He turned on the flashlight, then pointed it in their direction. Cami shifted her bottom, causing the bed of tropical ferns she sat on to shiver and whisper. Ian, on the other hand, rubbed his feet together as if trying to scratch an itch. Which wouldn’t surprise him. Although the locals had told him that they were at the tail end of the wet season, the mosquitoes were still bad. They’d been buzzing by him for the past two hours. Between the ski mask and insect repellent he’d sprayed on himself, so far none of the little bastards had taken a bite. He’d guarantee they were feasting on his prey, though.

He set the flashlight on the ground next to his pack, angling it toward the prey, then quickly stood. With his knife in one hand, and his Browning in the other, he approached the cypress, cut the cord, then took a step back. “Don’t move. I’m going to remove your bindings, and then you’re going to run west,” he said, pointing in the direction he wanted them to go. “The first leg of the hunt will be mostly wooded and dry. In about four miles, that’s going to change.”

After he removed the handcuffs, he shoved Cami to her side, then cut the duct tape surrounding her wrists. Her hands free, she ripped the tape covering her mouth. “Bastard,” she said, her voice hoarse, likely from lack of water, along with all her damned screaming.

“I’ve been called worse,” he responded, knocking Ian to the ground. After he sliced through Ian’s bindings, he aimed the gun at his head. “Don’t take the tape from your mouth. Anything you have to say will only piss me off and make me trigger-happy.” He waved the gun at Cami. “Get up, Screamer. You too, Prick.”

Ian glared at him as he used his palms to rise from the ground. He then offered his hand to Cami and helped her to her feet. Once she was standing, she rubbed the front of her neck. The glow from the flashlight didn’t expose much, but he wouldn’t be surprised if the cord had chafed her throat. She’d better hope that she hadn’t rubbed the skin raw. The bugs would have a grand ol’ time feasting on an open wound.

“Why are you doing this?” Cami asked, reaching for Ian’s arm. “You don’t have to do this. We haven’t seen your face, we don’t know who you—”

The little prick shook his head and grunted.

“By the time I put a bullet in your head you will. Speaking of which, it looks like we’re still on schedule. Dawn will be breaking in less than an hour.” He quickly glanced at his watch. “Actually at six-ten, forty-eight minutes from now—if we want to be exact. And that’s when I’m coming for you.” He motioned them toward the trail that would send them into the heart of the Everglades. “So, I suggest you run.”

Ian stepped in front of Cami. His chest rose and fell quickly, and the way he breathed hard through his nostrils had him sounding more like a snorting bull preparing to attack, than a multi-million dollar businessman on the verge of being hunted. The little prick’s narrowed eyes told him he wanted to say something. Although curious as to what bullshit argument or excuse Ian might make to talk his way out of being hunted, he had no intention of letting the man speak. Ian was, and always would be, a lying, manipulative son of a bitch.

Thanks to the prick, his life had reached an all-time low. But he’d reached an epiphany. Death had a funny way of making him realize that life sucked. That sometimes there wasn’t a better tomorrow. That when you have nothing to lose and everything to gain, you could do anything you want.

Like hunting a man who’d taken everything from him.
About the Author: 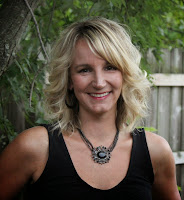 Kristine Mason is the bestselling author of the popular romantic suspense trilogies C.O.R.E. Shadow and Ultimate C.O.R.E. She is currently working on her next trilogy, C.O.R.E Above the Law, along with a series of Psychic C.O.R.E. novellas—all to be released in 2015.

Connect with Kristine on Facebook, Twitter or Goodreads. And be sure to sign up for her newsletter for a chance to win a $50 Amazon gift card!

Buy the book at Barnes and Noble or Amazon