This post is part of a virtual book tour organized by Goddess Fish Promotions. Elia will be awarding $25 Amazon or B/N GC to a randomly drawn winner via rafflecopter during the tour. Click on the tour banner to see the other stops on the tour.

Thanks for having me on the blog today! I was asked to share five things you’d never guess about me, so here they are, in no particular order.

1. I used to be conservative. My upbringing was loving, but straight-laced and restrictive. My parents grew up in the Leave It To Beaver generation and wanted that wholesome Americana upbringing for their children, complete with conservative family values and church on Sunday. PG-13 movies were beyond the pale and sex was for marriage.

3. I’m really good at math. We’re talking “mathlete in high school” type of math geek, here. When I was in college, I was a double major for a little while in English and Astronomy. Eventually, I dropped Astronomy to a minor, but this wasn’t until I’d already taken extensive math and science coursework, all the way through multivariable calculus. Now, I mostly use these advanced math skills to confuse my linear-thinking students who believe one has to choose between the humanities and the sciences.

4. I practiced Taekwondo for years. I got into Taekwondo in college, joining a group that practiced 10 hours a week. I loved it and even got into the competition circuit. Forms and breaking were my two strongest elements, and I have a collection of medals as a result. After my instructor moved away, I fell out of the habit of practicing, and I’d like to get involved again someday.

5. I love gadgets. I’m an early adopter of many technologies. My love of gadgets extends to non-tech gadgets, too: I have a hammock tent, for instance, which is super cool and generally the envy of everyone I camp with. Of course, my love of gadgets also manifests in an extensive collection of sex toys. This aspect of my personality inspired the character of Astrid in Combustion, inventor and manufacturer of sex toys. She loves gadgets even more than I do.

A war orphan, Astrid Bailey is content living her adult life alone, working as a contract machinist. Her real passion, though, is inventing felicitation devices that promote women’s sexual empowerment and help them find pleasure independent of a man.

The upcoming World’s Fair, with its substantial cash prize, is an opportunity to open the shop she’s always imagined and hopefully solve her financial woes. Except the committee has denied her entry unless she obtains a “sponsor”. Astrid suspects they mean “male”.

Eli Rutledge, noted watchmaker, knows entering the fair will solidify his reputation as an innovator —but he’s fresh out of ideas. Until Astrid approaches him with her outrageous product line. With no other options, though, he agrees to lend her his good name.

As construction heats up, so does their chemistry—and the complications. Astrid is unaccustomed to asking for help, much less sharing credit. And Eli fights an attraction that could spell professional disaster. As the Fair date approaches, Astrid and Eli must decide how far they’ll go. For the business…and for each other.

When she met his eyes again, her gaze was resolute. “Mr. Rutledge, I don’t mean to give the wrong impression. It’s very kind of you to come meet with us, when I’m sure there are other things you could be doing.” Astrid put her shoulders back slightly, straightening. “But whether you realize it or not, you’re the very reason we women need groups like this.” With a wave of her hand, she gestured to the other ladies gathered in the room. “You have nothing in common with us. You inherited a successful business from your father, who was already a prominent businessman, and your greatest achievement is to not yet have run it into the ground. Other people have given you everything you’ve ever needed. As a man, you can get a position on the Chamber of Commerce or the Fair Board or the IFCT or the London Business Council or whatever, and know that when you talk, people will listen. And I’m very happy that you have the money to own a shop and rent a booth at the World’s Fair, but to assume that everyone else is in the same position as you demonstrates how completely clueless you are about the plight of women business owners in this city. So no, you haven’t said anything to offend me. Everything about you offends me.”

The room had gone silent, and Eli stood frozen, staring down into Astrid’s face, into her dark eyes that suddenly widened as she realized the magnitude of what she had just said. She flushed, her face and neck and collarbones turning a rosy shade of pink, and she pressed one hand to her lips before turning and rushing from the room.

As she left, Eli watched her go with numb shock. Her words had been incredibly rude, and he couldn’t help but feel stung. What shocked him the most, though, was his sudden and overwhelming urge to kiss her.
About the Author: 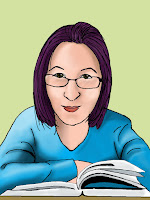 Elia Winters has always been a New England girl, despite having spent much of her childhood in Florida. She holds a degree in English Literature and teaches at a small rural high school where she runs too many extracurricular activities. She balances her love of the outdoors with a bottomless well of geekiness.

Buy the book at Samhain Publishing, Amazon, Barnes and Noble, and other ebook retailers.