A special thanks to Lori Power who has agreed to answering some nosy questions for our readers.

What is your favorite ice cream flavor?

Better pecan … so gooey, with crunchy elements and mixtures of rich flavours.

A dragon … I am fierce and passionate in what I believe in, but I am also insanely loyal to protect.

First book you remember making an indelible impression on you.

Follow the River by James Thom, about a woman who escaped captivity and followed a river to freedom

How do you develop your plot and characters?

I try to get into their mind-set. I want each page to have an interesting element to keep the reader moving forward in the story. Many times, I would love to show each scene from both character’s point of view, but I have to pick who would be most impacted by that scene and go from there.

My writing space is me and my laptop at the ready when opportunity strikes. I try to plan a certain amount of time to dedicate to writing, however, very often it is based on time permitted, rather than time allotted. 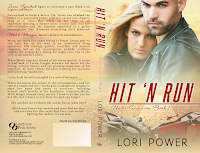 Determined to build a better life, and forget their past, a freak accident crashes Lorna Tymchuk and Mitch Morgan back into each others lives.

It’s more than a “Hit ’n Run” that needs to be taken care of at the police station. False identification, miscommunication and a past better left buried surface to plunge these recently reunited lovers into a deadly game of cat and mouse trying to figure out who the bad guys really are.

All threads pulled threaten the very fabric of their fragile relationship. Caught between desire suspicions, each must decide who to trust and how far to go to follow their instincts.

The long, black hearse sat in the shade of the leafy willows, unnoticed in the quiet, upscale neighbourhood. Like a panther surveying its prey, watchful behind the tinted glass, undercover officer Mitchell Morgan scrutinized the surroundings, ever conscious of the contents in the back.

Mouth parched, complete with a tongue as dry as sand, Mitchell tilted the water bottle slowly and swallowed, enjoying the moist coolness as it trickled down his throat. Satisfied, he slumped farther in the leather seat, aware of the children in the driveway on the corner, the stooped, elderly man picking weeds in the yard nearby, the teen across the street who sat hunched over his DS, on the front concrete step, looking bored.

The holstered cell next to his leg vibrated an insistent stutter, shattering the serene atmosphere. Mitch spared the screen a brief glance.

Without air conditioning, beads of sweat coasted from his brow, under his shades and into his eye, stinging and obscuring his vision. He blinked several times to clear the fog and pressed the accept key.

Three quick, muted tones preceded a double click, to indicate a secure line. A small thrill travelled along his nervous system, leaving a wake of gooseflesh.

“Nine-one-three-Q-R-two-two-E-D-U.” Only after he gave his code would dispatch relay the encrypted message.

“Funeral procession to start,” replied a robotic voice. “All pallbearers to the church.”

A long high-pitched tone pierced his ear. He moved the phone away and severed the connection.

He held the phone level with the steering wheel. His thumb smeared across the face of the cell leaving a greased streak on the screen, while his heart slowed. Within an instant his mind refocused to what was to come next. His left hand moved to smooth his beard. Months of building a case and gathering evidence had come down to this moment.

He turned the engine over and banged the heel of his hand on the steering wheel. “Game on.” 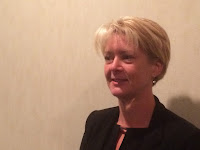 Turning passion into words in print is a dream come true for Lori Power.

From Radio host (best job ever!), DJ, news reporter to newspaper journalist, like many authors, Lori has been writing most of her life.

In writing, Lori has discovered a truism: everyone has a great story to tell. All you need to do is listen. Over the years, with all the people Lori has meet previously and daily, both professionally and personally, with an ear to the ground, readers can often find these ‘characters’ fictionalized in Lori’s stories.

Lori’s first novel “Storms of Passion” was published by The Wild Rose Press under their Champagne line, in 2014 and received a 5-star Author’s Favourite seal of approval in 2015.

Collaboration is important to improving one’s craft and as such, Lori is an active member of the Romance Writers of America, TransCanada Romance Writers, The Alberta Romance Writers Association and belongs to both a Critiquing group and a Beta Reading weekly group.

Lori looks forward to continuing to find the good story; hashing out a scene, having fun with a character and writing the story she would love to read.