This post is part of a virtual book tour organized by Goddess Fish Promotions. Ashish Malpani will be awarding $10 Amazon or Barnes and Noble GC to a randomly drawn winner via rafflecopter during the tour. Click on the tour banner to see the other stops on the tour.

Sharing five things about me did turn out to be a fun and interesting exercise. Often I wonder if I were to stand next to my old self at fifteen years of age, will that shy and introvert boy recognize me? Growing up in a small town in rural India, unlike my lawyer parents I wasn’t the one who was reaching out to people, talking to them and making friends. I kept it to myself and often stayed quiet even in a group setting. But now when I look back, I think I spent more time in observing how people behaved and reacted to things. May be the places, the people, the smells and the behaviors that I observed then got recorded into my brain and come alive through my writing.

I get the inspiration and energy to write from those around me. I can never picture myself locked in a cabin and writing for days. I need human interaction to foster creativity. After a day full of interactions, as the clock ticks past 9 p.m. together with some music in my earphones and a warm cup of coffee is the perfect setup for my fingers to start beating the keyboard. That is the reason why I have not missed any social engagements throughout the process. I do believe that this has influenced my characters and exploring their social behavior has definitely made them more alive.

Talking about music, I do like mystic music especially the Sufi music even though largely I consider myself as Hindu atheist. It does present an interesting contradiction of psyche. When I look at a larger picture though, I believe that such contradictions exist in each and every one of us and we have to find a way to deal with them. I have challenged my characters with such questions and immersed myself in their psyche to find the answers. The protagonist Shivaji Chavan in ‘Ten Days in October’ has to navigate through such contradictions and formulate his own philosophy of life.

Don’t be surprised if I say that I have not experienced a writer’s block while writing ‘Ten Days in October.’ I feel that having the engineering and marketing background really helped me here. I took a fairly structured approach to writing the novel. Starting with one liner for the novel, I outlined the whole story, characters, chapters and scenes. To be honest, it was also the deadline set by my wife to finish the novel that forced me to charge ahead and not go off-track. I personally think, having self-discipline and schedule is critical to writing process. Some may argue that it limits creativity but then I must say that it was the other way round for me.

I do believe that as an author my role is not to just tell a story but to connect with my readers and force them to think. I have tried to achieve the same in ‘Ten Days in October’ and based on the feedback I have received so far I will like to think that the effort probably resulted in some good discussions. The story of ‘Ten Days in October’ is loosely inspired by real life events and makes a commentary on one of the glaring social issues we face today. I intend to continue writing with thought provoking socio-economic issues at the center stage.

'5 a.m. phone call broke Police Inspector Shivaji Chavan’s sleep informing him that local jeweler Anil Kokate, was found hanging from a tree on the banks of Pravara River in a small town of rural India. Although the signs point to an open and shut case of suicide, Chavan suspects foul play. While trying to find the missing pieces of the story he finds more hidden skeletons and comes across astonishing & cruel past of the victim. What begins as a routine investigation quickly turns darker, ruthless and pressing. Can Chavan handle the pressure of his superiors, local media and frightened masses? Can he navigate the system to reach the killer? Can he solve the moral dilemma when he comes face to face with the killer?

‘Haramkhor! What a way to ruin a beautiful morning!’ Inspector Shivaji Chavan thought as he rode his bullet to the river bank of a rural town in India, where local jeweler Anil Kokate was found hanging from a tree. Chavan’s sleep was disturbed by the phone call informing him about the suicide but his initial investigation makes him suspect foul play. While trying to find the missing pieces of the story he finds more hidden skeletons. The routine investigation turns darker, more deadly and pressing. Can Chavan handle the pressure of his superiors, bribes and local media and navigate the system? Can he solve the moral dilemma when he comes face to face with the killer? 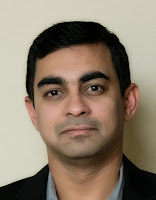 Ashish Malpani is an Indian-American freelancer and blogger. Born in Sangamner, a small town in rural India, he spent much of his adult life in Austin, Texas. A technology product marketer by trade, Ashish earned his MSE from Purdue University and MBA from the University of Texas. Ashish fell in love with reading and traveling at a young age. As a kid he had two dreams in life: to write a novel and to travel around the world. Thirty eight countries and counting, Ashish has explored various cultures and captured the world through the lens of his camera with his wife Samta and son Ayan.