This post is part of a virtual book tour organized by Goddess Fish Promotions. Ally Shields will be awarding a $30 Amazon or Barnes and Noble GC to a randomly drawn winner via rafflecopter during the tour. Click on the tour banner to see the other stops on the tour.

One of the necessary and fun things about writing is doing the research to keep the real world information as accurate as possible. Since that often leads me into unusual websites and strange articles, I pick up a number of obscure facts. This is just a brief sampling, but some of them actually made it into the book.

1. A cottonmouth snake aka water moccasin is North America's only venomous water snake (http://www.livescience.com/43597-facts-about-water-moccasin-cottonmouth-snakes.html), and people who breed and study venomous snakes (and other reptiles) are called herpetoculturists.

2. Not all Satanists worship a fallen angel. They are more often atheists, believing neither in God or the devil. (http://www.churchofsatan.com)

3. Many famous cemeteries don't have a night watchman. Well, who could blame someone for not wanting that job? 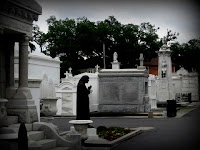 4. The docks at the New Orleans ports are guarded like Fort Knox - fences, armed guards. They won't even let you take pictures (unless you're sneaky enough).

5. Kate Batts, known as The Bell Witch, was actually a ghost. She haunted a Tennessee family with eerie sounds, strange sightings, and violence for nearly four years, resulting in the death of one man. (http://www.prairieghosts.com/b-cave.html)

Too many ghosts is never a good thing...

Detectives Maggie York and Josh Brandt's latest murder case comes at the wrong moment. She just moved out on him and wants to "cool it." But complications throw them together more than usual. Even for New Orleans, the case is unique—with way too many suspects and creepy things—ghosts, snakes, curses, not to mention the witches.

Maggie and Josh try to make sense of it all and resist finding consolation in each other's arms. Then Josh's ex-fiancee, a curvy blonde, arrives from Boston, making a touchy situation impossible.

But this killer won't wait for them to sort out their personal lives, and the situation spins out of control...

The old woman had been particularly insistent on attendance tonight, piquing Maggie's curiosity. And a little apprehension. Had Selena had another of her visions, possibly foretelling trouble in the near future? When asked, her cousin had given a typically cryptic answer. "Good and evil are always in motion."

Which told her nothing new. Maggie sighed, darting a glance at the focused women around her. No matter. The future wouldn't be changed by worrying. Besides, she had no real objection to being here and supporting the coven's hopes of healing one member's gravely ill four-year-old niece, for a laid-off worker to find a new job, and a universal plea for greater wisdom. They could all use a dose of that.

While calling upon the Goddess to bless and protect them, Selena made a three-sixty turn, her gown billowing as she included every participant. Maggie suddenly stiffened and peered behind her cousin. Had something dark and wispy swooped past? No, of course not. The lifting dawn mist had fired her overactive imagination.

Yet her heart beat a bit faster, and she joined in the final lines of the closing chant with more gravity than usual.

"In calm or stormy days to come, light our pathways safely home.
Gracious Goddess, grant our plea. So mote it be."

Maggie was tempted to add an "Amen" for good measure.

As they blew out their candles, her cell phone buzzed. She checked the screen. Police dispatch. Her real world snapped back into place. While they'd been surrounded by the hope inherent in these pre-dawn gatherings, someone else had committed the most grievous assault upon society…the murder of one of its citizens.

About the Author: Ally Shields grew up in the Midwest along the Mississippi River, still considers herself "a river rat," and currently resides near Des Moines. After a career in law and juvenile justice, she turned to full-time fiction writing in 2009. Her first urban fantasy, Awakening the Fire (Guardian Witch #1) was published in 2012, and she currently has twelve published novels. She loves to travel in the US and abroad and incorporates many of those settings into her books. Ms. Shields welcomes reader contact through her website and can frequently be found on Twitter.

Check out all of Ally Shields' books on Amazon.