Today we're welcoming author Courtney Rene to the blog on her tour with Goddess Fish Promotions for the paranormal YA novel, "Shadow Warrior".

Courtney will be giving away $10 Amazon.com gift certificates to two randomly drawn commenters during the tour. So comment today AND follow her tour (if you click on the banner over there on the left, it'll take you to a list of her tour stops) -- the more you read and comment, the better your odds of winning. You could be introduced to a great new author AND win a GC!

Courtney was kind enough to answer my questions. Take it away, Courtney!

I choose YA for the simple matter that I am surrounded by teens almost every single day. I talk with them, and listen to them, and try very hard to understand them. Young Adults are just entertaining people in general. You never know what they are going to say or do. Putting all that character and spontaneity and life into story form was so very fun.

I love fantasy. I still build fairy houses around my big trees just for the sheer silliness of it. Plus what if? Right? YAs and Teens, still want to believe in fantasy. Whether it’s vampires or werewolves or fairies, they want to believe. I want to write for someone that still has that belief in place.

One big one would be to make sure you can see the world in your head. All of it. Not just the edges, but the middle and the corners and the underneath of it all. I am not much of an outliner. Actually I hate to outline, but I did have to check myself when it came to creating Acadia. It was all gray and blurred and that showed big-time in the story. I had to stop, sit down, and really plan out Acadia. Once I did that, it was 100% better and a much better world and story.

Another would be to have fun. You have a chance to create your own world. So…create it!

What do you do when you get writer's block?

Sometimes all I need to do is get away from the story for a bit. Go outside, sit in the sun, walk in the woods, work in the garden, just something. Then when I sit back down to start working I am refreshed and ready to get to it.

Other times, I have to really take a break. Mull over in my brain for a few days what isn’t working or why the story is stuck. I will take that opportunity to get in some reading. Focusing on another story is the best way to get away from your own.

Strange quirks, eh? Sadly, I have many. First, I have an addiction to Harry and David Gummy Bears. This addiction is posing a real problem too, as our local store shut down this past fall, and now they are nowhere to be found within a hundred miles. You can’t buy them on line anymore either. It’s a horror story in the making. Second, I happen to be a renowned klutz. Don’t stand to close or I may take you down with me. One good thing to come out of this is that I can firmly say, I know how to fall and do it quite well. I am the only child I know who was removed from ballet class due to being a danger to myself and to others. Sad, but true story. Welp, that’s enough dirt on me for now.

What's one thing about you we'd probably never guess?

I am supremely shy. No really, I am. In writing you wouldn’t know it, but in person, WOW.

Any new stories in the pipeline you'd like to tell us about?

Well, I do have a new paranormal YA novel coming out later in 2012 called: A Howl in the Night. Yes, you guessed it. It’s a shape-shifter story. Not your normal, “Oh No! I’m a werewolf” type, but a “Cool, look what I can do” type. Plus add in a power struggle and two jealous boys and you have quite the fun romp of a story, at least if you ask me *G*.

I am also finishing the last installment of the Shadow Dancer series. Revisions….ick. Since I know you will all just LOVE Shadow Dancer and Shadow Warrior, you'll need to stick around to see the end. The working title at the moment is: Shadow’s End.

You can check my blog to find updates on both of these novels, as I am usually very excited about releases and tend to over spew about them…everywhere.

Sunny finally makes her first jump over to the Kingdom of Acadia that is on the other side of the shadows, for what she hopes is a vacation. Only her vacation turns into quite an unwanted adventure. Aside from new and unexpected issues regarding her relationship with Leif, Sunny meets the rebel group, makes new friends, fights with controlling her powers, and finds herself neck deep within a county that is torn apart by two sides, each fighting for power. Acadia is not quite what she imagined. How is she, one young girl, suppose to unite the Kingdom as well as unseat a King to take her place as ruler of Acadia.

"This is going to feel a bit strange," he said, still looking at me.

"Strange, how?" I asked. Strange weird would be okay, but strange pain, would not.

Then before I could get a better answer out of him, he said, "Here we go. One, two, pull."

I did as Leif instructed. I pulled the shadows up and over me again and suddenly, without warning, I was jerked painfully backward. The world was suddenly dark and grey. Everything was spinning out of control. It was spinning around and around and over and over, and my head clouded and fogged. I felt like I was tumbling and falling, and then we stopped, just as instantaneous as we had begun.

The ground was now solid again beneath my feet. I wobbled once, twice then I dropped to my knees and threw up the entire contents of my stomach. I felt Leif pull back my hair for me and thought absently, that's nice.

My head still spun, even after my stomach finally stopped heaving. I sat back on my feet, my head hung down. A bottle of water was thrust under my nose. I took it and washed out my mouth as I tried to regain my senses. The first real thought that came to my head was, "That felt more than a little strange." 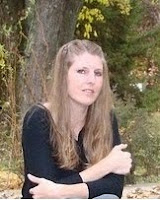 About the author: Courtney Rene lives in Ohio with her husband and two children. She is a graduate and member of the Institute of Children’s Literature. Her writings include magazine articles, short fiction stories, several anthologies, and her Shadow Dancer series, published through Rogue Phoenix Press. For a complete listing, visit www.ctnyrene.blogspot com . Please feel free to contact her at ctnyrene@aol.com .

Remember to leave a comment and be entered to win one of two $10 Amazon GCs!

Thanks for stopping by today, Courtney.
Posted by MJ Thomas at 1:00 AM