Review: Louisa and the Crystal Gazer by Anna MacLean 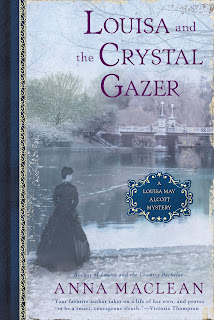 A young Louisa May Alcott accompanies her friend Sylvia to visit Boston's most famous spiritual medium, Mrs. Agatha D. Percy, to contact Sylvia's long-dead father. Louisa isn't one to believe such foolishness-until one of the seer's predictions comes true.

Louisa and Sylvia visit the seer again, but Mrs. Percy's days of divination have been cut brutally short by a killer. Now, Louisa must solve the mystery of the crystal gazer's untimely death by uncovering the shocking truth about her life.

I cannot remember when I have enjoyed reading a book as much as I enjoyed this one. I felt as though it was actually written in that time and place by the real Louisa. It was so factual, and included so many little details that one would think only someone who lived in that time would have known.

Louisa became so real to me that that I felt I was actually living with her in that time. I was able to follow her thought processes as the mystery unfolded. This story actually included people who were alive then, and not just as part of the setting, they were included in the mystery. I got to know so much more than I had ever known about them before, it was an additional bonus to the story.

The mystery involved a medium and spiritualist, of which there were many in those times. The people involved all wanted to contact a departed loved one, and of course the medium was a fraud. How she worked was important and also important was all the intertwined stories of the people who attended the séance.

Louisa determines to solve all the mysteries, while spending time working to help with Christmas presents for her family. She is so clever and, like Jo in little women, she is also writing to make a little additional money. She just can’t quit thinking and working on solving the case, even though the police think they have it solved. She is confident that they are wrong and she is right. It was so fun letting the story unfold. I found it difficult to put this book down. There were so many people that could have committed the murder, and I could not figure out who had done it. The end was a surprise in a way, but then looking back I could see how, if I had been just a bit more careful and alert, I should have known. All the clues were there for me to find.

If you enjoy reading about this time in our history, and if you loved any of the books that Louisa May Alcott wrote, you will love this one even more. I swear this author went back in time and lived in Boston while she wrote this story.

While my rating system only goes up to five, if I could give this MORE than five flowers, I would. It's that good.