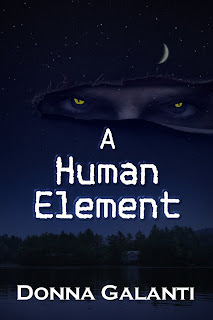 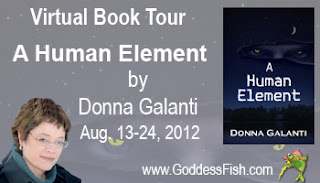 This review is done in conjunction with the author's virtual tour with Goddess Fish Promotions. Donna will be awarding a $50 Amazon GC to a randomly drawn commenter during the tour, so comment today AND follow the tour (if you click on the tour banner above, it'll take you to a list of her tour stops) -- the more you read and comment, the better your odds of winning. You could be introduced to a great new author AND win a GC!

One by one, Laura Armstrong’s friends and adoptive family members are being murdered, and despite her unique healing powers, she can do nothing to stop it. The savage killer haunts her dreams, tormenting her with the promise that she is next. Determined to find the killer, she follows her visions to the site of a crashed meteorite–her hometown. There, she meets Ben Fieldstone, who seeks answers about his parents’ death the night the meteorite struck. In a race to stop a mad man, they unravel a frightening secret that binds them together. But the killer’s desire to destroy Laura face-to-face leads to a showdown that puts Laura and Ben’s emotional relationship and Laura’s pure spirit to the test. With the killer closing in, Laura discovers her destiny is linked to his and she has two choices–redeem him or kill him.

I was intrigued first by the cover to this book, and then by the premise.  It has all my hot buttons: serial killers, psychic powers, romance ... what's not to like?

The book starts off with a bang, literally.  A meteor falls to earth while a little boy watches.  In another place and time, a few months later, babies are born and one is surrendered to a mysterious man in black, putting into play everything that matters in the book.

We spend about half this book watching our hero and heroine grow up.  I admit to finding the heroine, Laura, a little too perfect, too nice, too friendly, too loving.  She seemed to have no flaws. But the hero more than made up for it since he seemed to have no virtues.  I admit, I struggled to like him and giving him the label "hero" felt wrong.

Still, they were clearly meant to be together, and as they came together he began to redeem himself and to find that sweet little boy he used to be.  Laura never developed any real flaws, but I liked watching her with Ben.  It made her seem a bit more normal, which may have been the author's intention.

The evil here is truly evil in every way.  I shudder to think that something like X-10 could ever exist.  He had no mercy, no pity, no positive emotions.  He thrived on hate and anger and perverted lusts.  The courage Laura must have had to face him would have been enormous.

"A Human Element" had everything it needed to be a edge-of-your seat thriller, but I found it a bit slow.  I think we spent just a little too much time watching Ben and Laura grow up. Some parts of their lives were integral to the plot (like Laura's friend, Jim...I really loved him!), but some was a bit dull and unnecessary.

Still, overall it was a good book with an ending that surprised me.  Ms. Galanti has an amazing imagination and solid writing skills, and I expect to see great things in the future from her. 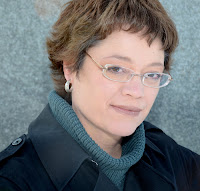 Donna Galanti is the author of the paranormal suspense novel A HUMAN ELEMENT (Echelon Press). Donna has a B.A. in English and a background in marketing. She is a member of International Thriller Writers, Horror Writers Association, The Greater Lehigh Valley Writers Group, and Pennwriters. She lives with her family in an old farmhouse in PA with lots of nooks, fireplaces, and stinkbugs but sadly, no ghosts.