Review: The Wild One by Danelle Harmon 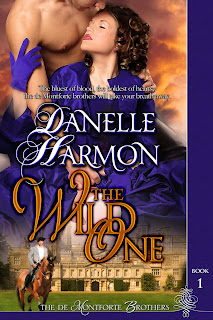 "The bluest of blood, the boldest of hearts; the de Montforte brothers will take your breath away."

England, 1776: Lord Gareth de Montforte is known as an irresponsible rake with a heart of gold. When he takes a bullet for boldly thwarting a stagecoach robbery, he is stunned to discover that the beautiful young woman he has heroically rescued, Juliet Paige, is his deceased brother’s American fiancée, accompanied by her infant daughter. Despite his brother the duke's refusal to acknowledge Juliet, Gareth is determined to do right by the courageous woman who crossed an ocean to give her baby her rightful name. But Juliet is wary of marrying this black sheep aristocrat, even while she is hopelessly charmed by the dashing devil. Never has she met anyone who embraces life so thoroughly, who makes her laugh, who loves her so well. And, even when it seems the odds are against them, Juliet has absolute faith that Gareth will go beyond the call of duty, risking his life itself to give her and her daughter a home — and a love that will last a lifetime.

What an unusual, entertaining and truly touching historical romance.  We don't get ballrooms or displays from the ton, despite the blue-blooded hero. No ... we have a chance to see the dregs of London and its outskirts instead, and this made for some fascinating reading.

The best part of this romance is that Juliet's conflicted feelings are so realistically portrayed. While Gareth falls head over arse for the beautiful, brave American almost at once, she is still in love with his dead brother, Charles, the father of her young daughter.

Certainly, she's attracted to Gareth ... but it is it because of his uncanny likeness to Charles?  Their demeanors couldn't be more different, but every time she looks, is it Gareth she sees?  Or the beloved, dead Charles?

Gareth had lead a life of debauchery:  drinking, women, pranks ... he couldn't live up to his perfect brother, Charles, so he became the opposite.  Yet, after meeting Juliet and heroically saving her life and the lives of the other coach passengers, his former life begins to lose its appeal.  Suddenly and unexpectedly, he begins to mature.  He has much learning to do, though, and stumbles along during the process making more than one error.

I think I fell in love with him, utterly, however, when he finds his brother's ring on Juliet's finger at a very inopportune time.  Despite the pain it assuredly must have given him, his behavior is most honorable and showed the depth of this man who seemed so shallow to the world.

Juliet is often impetuous, sometimes acting foolishly out of pride. Gareth is frequently clueless about real life, and occasionally makes poor choices.  This makes them so human and easy to relate to.

I thoroughly enjoyed this very well-written, lusciously descriptive and truly romantic story.  The real characters with their flaws, the unusual story and setting all came together to make one of the best historical romances I've read in some time.

Now... I need to get The Beloved One loaded onto my Nook immediately.  Because the end of The Wild One will allow for no other task.