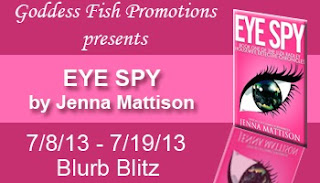 This post is part of a virtual book tour organized by Goddess Fish Promotions. Jenna will be awarding one digital copy of Eye Spy to a randomly drawn commenter at every stop. Click on the tour banner to see the other stops on the tour.

When Liza Radley realizes it’s cheatin’ season and no self-respecting detective’s gonna spy on her husband for the $800 and change she has hidden in a plastic soap dish, she does what any normal transplanted Georgia Peach would do--she becomes a private eye. While downing her fourth maple-glazed curbside, Liza discovers “Eye Spy”, a shop for the self-motivated sleuth in the heart of Boston. Inspiration strikes and she enters the world of Jack Parella, the owner/operator who talks like Humphrey Bogart but with a Southie accent and is more than willing to train Liza in the ways of amateur sleuthing, while simultaneously infuriating and titillating her. Though Liza starts the journey intending to rebuild her crumbling suburban life, she finds herself thrust into a fiery mystery as head of "Crimes of the Heart Detective Agency" with Parella by her side. Thus our dynamic duo is primed for their next adventure.

All men cheat. At least that’s what I’d always heard but I never believed a word of it.

I’m Liza Radley, I live in a two story gunmetal grey house near the end of a cul-de-sac. Bernie and I couldn’t afford actual cul-de-sac status six years ago when he started his practice here in Andover. Since then we’ve built our lives together brick by brick but now I find myself rifling thru his underwear drawer on a Thursday morning wondering if some young wolfette is trying to blow our house down.

Or blow my Bernie for that matter.

I mean, it’s not like I actually suspect him of the big A, but over breakfast my three best friends staged the suburban version of an intervention and now that the dirty little thought is lurking I can’t resist committing cardinal sin #1 from the Bad Wife Handbook. Snooping. Plus I want to prove the girls wrong and show them that my Berns and I are still in happily wedded bliss. Okay maybe not bliss…but I don’t know if bliss is even possible after 10 years of marriage so let’s just say we’re content in a frozen-lasagna-sex-once-a-month-with-the-lights-off sort of way.

Mattison started her career in Chicago appearing on television and radio. She founded founded Cheshire Smile Productions, bringing to life and penning her first feature film FISH WITHOUT A BICYCLE, a festival winning coming of age comedy which was directed by Brian Austin Green. “Fish” is now available on Netflix. Mattison also wrote Cheshire’s second release THE THIRD WISH now available at Blockbuster and distributed by the Hallmark Channel.

Lionsgate’s FOR THE LOVE OF MONEY, based on a true story of Jewish gangsters set in the 1970’s starring James Caan, Paul Sorvino, Edward Furlong and Jeffrey Tambor was also produced and written by Mattison. Most recently Jenna has written a TV movie called COMMITTED, which wrapped production this spring to premiere on television this fall. Her novel The Tree Of Jesse is a romantic religious thriller and will be released this spring, available worldwide. Mattison next novel is Eye Spy the first in a comedic romantic suspense series available this summer.