The Hourglass by Sharon Struth - review tour and giveaway 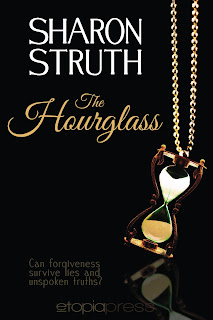 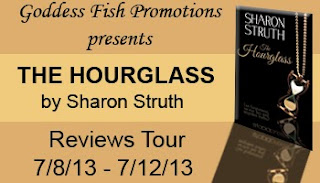 This review is done in conjunction with the author's virtual book tour with Goddess Fish Promotions. Sharon will be awarding a $20.00 Amazon GC to a randomly drawn commenter during the tour, so comment here today for your chance to win! Click the tour banner to see the other stops on the tour to increase your chances of winning!

Until Brenda McAllister’s husband committed suicide, she appeared to have the ideal life: a thriving psychology practice, success as a self-help author, and a model family. But her guilt over her affair with Jack’s best friend prevents her from moving on. Did Jack learn of her infidelity? Was she the cause of his death?

The release of Brenda’s second book forces her into an unexpected assignment with arrogant celebrity author CJ Morrison, whose irritating and edgy exterior hides the torment of his own mistakes. But as she grows closer to CJ, Brenda learns she wasn’t the only one with secrets—Jack had secrets of his own, unsavory ones that may have led to his death. While CJ helps Brenda uncover the truth about her husband, she finds the path to forgiveness isn’t always on the map.

This story began with Brenda rushing to get a cup of coffee at the hotel where she was staying. When she turned, going back to her room, she bumped into CJ, spilling hot coffee down the front of his jacket as he was heading out for a very important meeting. As you can imagine, this didn’t go over well with CJ. He let her know in no uncertain terms what he thought of her. Unfortunately, Brenda had been hired to work with him on his upcoming book. You can imagine how the sparks flew between them.

As I continued reading, I realized that this was not a typical romance. Neither was a young, 20 to 30 year old. They were much more mature. As a psychologist, Brenda knew better, but CJ brought out the worst in her, much to her dismay. I really enjoyed the verbal back and forth battles between the two of them. As they fought, they each discovered things about themselves that they needed to learn.

The romance between them did evolve, and it was done in a beautiful and realistic way. Each had things in their past that had to be resolved. They each tried to hide these things from the other. Brenda was still dealing with the suicide of her husband two years before, and CJ had never gotten over the death of his wife in an automobile accident ten years previously.

As they continued meeting, their delightful back and forth arguments continued, but they actually began to enjoy them. It was fun watching them resolve their problems and really get to know each other. Also, there were mysteries involved with the death of both partners that they had to deal with-- CJ, because he felt guilty and thought he had caused the death of his wife, and Brenda because she couldn’t understand why her husband had killed himself.

How these mysteries were resolved was so well done, I felt I was sitting by the characters as things happened. This writer is exceptional, and the way you get to know all her characters so completely is outstanding. She showed how people can overcome life’s obstacles and begin to live again. I really enjoyed this story.

An unexpected gravitational pull swelled Brenda’s anger. Her cute quip ran into hiding. She no longer cared about winning this man’s favor. His rudeness left her feeling as if she’d been doused with hot coffee this time. Brenda clenched her fists. A year of internal browbeating over Jack’s suicide had left her easily irritated.

Brenda gripped the frail edges of her self-control. “I once again offer my apologies for the accident, by definition an unplanned event with lack of intent.” He looked down his sturdy, Grecian nose at her, so she stood and put her hands on her hips. “Shouldn’t you, as a writer, know that?”

Every line on his face tensed. “I could do without your sarcasm.” He leaned closer. “Thanks to you, I missed my meeting. Maybe tomorrow morning you could get room service.”

The brunette unleashed a tight smirk. CJ motioned for them to move on.

Brenda fumbled for a good retort. As he stepped away, the last word went with him. The same way Jack had the last word in their life together. A silent explosion went off inside Brenda’s head and propelled her anger forward.

“Mr. Morrison?” She raised her voice to be heard above the crowd.

He looked over his shoulder and arched a questioning eyebrow.

Brenda crossed her arms and fixed a phony smile as she nodded toward his companion. “It’s so nice of you to bring your daughter to the conference.” 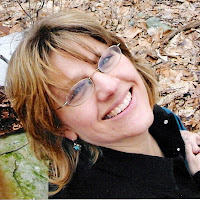 Novelist Sharon Struth believes you’re never too old to pursue a dream. The Hourglass, her debut novel, received first place in the Dixie Cane Memorial Contest and second place in the Golden Heart. She writes from the friendliest place she’s ever lived, Bethel, Connecticut, along with her husband, two daughters and canine companions. For more information, including where to find her published essays, please visit http://www.sharonstruth.com.