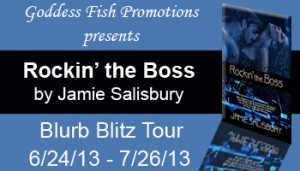 Max Frazier may be a stunningly handsome international rock star, but he has other hidden talents from his past. Talents the authorities want him to use. Talents Max thought of as one hit wonders and wanted to keep in his past.

His smokin' hot employer, Ashleigh Thomas, is unaware of his past with the S.A.S. Recently widowed, she yearns to bring the entertainment agency she and her late husband owned out of ruins, with Max's help. Together they embark on a once in a lifetime deal for Max.

Will their mutual attraction for the other turn to fire, or will it burn to ashes once Ashleigh learns the truth? As she and Max find themselves helping the authorities bring in a figure from Ashleigh's past…will love trump evil?

Then, his voice and demeanor took a more serious tone. “Then there was your marriage to Richard and his sudden death.”

I carefully placed my fork back on the plate and stared at him, shocked that he would bring up Richard. We had been together for close to fifteen years. It had been obvious to everyone except me that he had married me exclusively for the money and connections that my family brought. What he had not expected was Papa insisting on a pre-nuptial agreement.

Richard made the best of the knowledge that he would get nothing if he ever chose to leave. As soon as we married, sex was non-existent between us. He had a steady stream of mistresses and thought little of parading them in front of me. The agency had been his idea, as he had loved the lifestyle and fame it brought. His life had ended as he had lived—hard, fast, and mysterious.

I took a bite of salad and did not react immediately. “I was surprised when you moved to Atlanta.” As I changed the subject, my tone made it clear to Max that Richard was an issue I did not wish to discuss.

“I wanted to be closer to the new team you put together. Manhattan can be so over-rated and expensive. California I love, but it’s even further away. But I do like the climate and the opportunities. Atlanta intrigued me. What made you move here?” The sides of his mouth curled up as though he already knew the answer.

What’s he up to? “Atlanta is special. My mother’s from the area, and I spent a lot of time here growing up.”

“Ah-ha!” he boomed, as he grinned at me. “Now I know why your parent’s named you Ashleigh. It's so Atlanta, so Southern, so Gone with the Wind.”

“Better than the alternative I suppose.”

“What would that be?”

“My father wanted to name me Coco after Coco Chanel, which might have worked in France, but here I don’t know. At least fun can be had with Ashleigh. You know, the Gone with the Wind melodrama.” I replied as we left the table and headed into the living room. “Would you like coffee, Max, or perhaps something stronger?”

“A brandy sounds great, love,” his accent thicker than earlier.

The change did not go unnoticed as I left to fetch the liquor. I returned with two snifters and handed one to him. He seated himself back on the sofa as I walked around to a chair where I could gaze at him from a safe distance.

“I thought, if you are in agreement, we’d stay at a condo that belongs to a girlfriend of mine. She travels extensively. I’m sure she’d be more than happy to let us use her place.”

“That sounds fine. When do you want to leave?” His deep brown stare roamed over my body, a grin curving his luscious lips.

I shifted in my seat, trying desperately not to notice. “Day after tomorrow suit you?”

Jamie Salisbury cannot imagine a time when she did not write. A skill that has served her well throughout her diversified professional career that encompassed public relations in and around the entertainment industry, photography, editing, and special event planning.

An avid reader of history, biographies, and romance it's only natural that she prefers to write romances with characters said to be "so authentic they spring forth from the page and shake the reader's hand." No stranger to life threatening situations Jamie pulls from life experience when she creates her stories. Such as when her family had to escape Chile when she was a teen because of the unstable political climate.

Finding herself unable to walk great distances as a result of several foot surgeries, she started writing once again as a way to pass the time. With the completion of her first novel Perpetual Love she dove head first into the eBook and digital publishing paradigm. She couldn't be happier with her decision to grab the publishing industry by the shoulders and force it to pay attention to all she has to offer.