The Green Rose by Stephanie Burkhart - Review and Giveaway 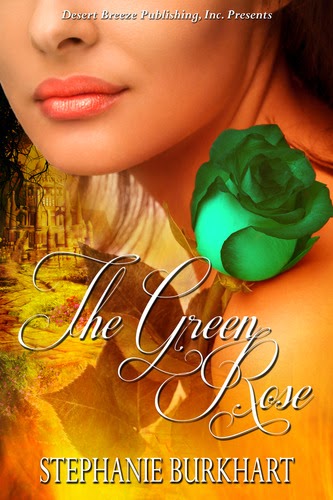 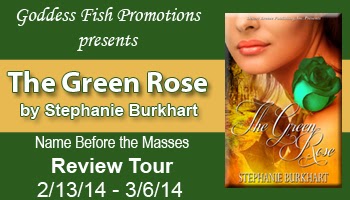 This review is done in conjunction with a virtual book tour organized by Goddess Fish Promotions. Stephanie will be awarding a $25 Amazon GC to a randomly drawn commenter during the tour. You can see the other stops on the tour by clicking the tour banner.

On the continent of Gaia, evil is brewing. Turncoat wizard, Balthyser, kidnaps the kings of Dahaka and Tapin. He wants the green rose, a source of powerful magic.

Princess Sonia of Tapin is forced to hunt down the rose in exchange for her father's life. It's the ultimate betrayal of Gaia's peace, but she has no choice if she wants to save her father.

Prince Ivánstan of Dahaka accompanies her on the journey. Both face challenges and obstacles that test their strength of character during the hunt for the rose. Dare Sonia put her trust and faith in a man she hardly knows to secure Gaia's peace or will the continent's harmony be shattered forever?

My review:  I read this book cover-to-cover in one afternoon.  I was honestly surprised that I did, and it's a credit to the author's voice because, honestly, it's not a deep book, nor does it have a particularly challenging conflict.  However, I was fully engaged in the honestly written characters, once I got everyone sorted out -- there are a LOT of people here and, especially in the beginning, I found myself having to go back and figure out just who was who and how they all fit together!

The story is pretty simple and involves a quest of sorts as do most fantasies.  Ivan and Sonia are instantly attracted, and other than a difficulty in trusting men and the chance that their fathers may not give them permission to marry, there wasn't much keeping them apart.  I honestly never worried that they'd not be together, but I really enjoyed Ivan's straightforward behavior -- I'm certain that's why he was able to win Sonia's trust fairly easily.

The quest, too, wasn't particularly fraught with danger or worry.  Things seemed to be fairly simple for them, despite their footsteps being dogged by Sonia's ex-fiancé.  Still, again, it was engaging and so smooth to read.

This is the second book by this author that I've read, and I'm truly impressed by her ability to craft characters that I care about.  Her plots may not be the most nail-bitingly suspenseful or particularly complex, but they're strong enough to keep my attention and the time I spend reading her books just flies by.  I wasn't a fan of the few words she used quirky spelling on, like "myles" instead of "miles" and "fyte" for "foot".  It wasn't necessary and was one of the few things that really distracted me as I read.

All-in-all, though The Green Rose was a book that engaged me, entertained me, and left me with a smile. What more can I ask?

This book easily earned 4 Flowers from me -- This was a very good book! I'd recommend it to my friends. Stephanie Burkhart is a 911 dispatcher for LAPD. She was born and raised in Manchester, New Hampshire. She served 11 years in the US Army and currently calls Castaic, California her home. Stephanie was married in Denmark in 1991 and has two young sons. She adores chocolate, is addicted to coffee and enjoys early morning walks. She's also an assistant den leader for her son's Cub Scout den and is a Boy Scout mom. She writes paranormal, contemporary, and steampunk romance and has two children's books published with 4RV Publishing.