Kiss Me by Moonlight by Michele Zurlo - Interview and Giveaway

This post is part of a virtual book tour organized by Goddess Fish Promotions. Michele will be awarding a choice of signed paperback copy of Wanting Wilder, Mina’s Heart, Kiss Me Goodnight, or Kiss Me By Moonlight, and a $25 Amazon gift card to one randomly drawn winner via rafflecopter during the tour. (US ONLY) Click on the tour banner to see the other stops on the tour.

Thanks for stopping by It's Raining Books, Michele. Why do you write in your genre? What draws you to it?

Michele: I’ve always been drawn to New Adult, even before it was a genre. Even before I wrote Letting Go, I wrote a novel under another name called Tomorrow Cries. Today it would be considered NA, but when it came out four years ago, it didn’t really fit anywhere. I had to change things to make it fit mainstream romance, including the age of the heroine. Rhiannon was supposed to be 16 at the start of the novel, but the publisher’s rules said she had to be at least 18. It didn’t do well, and I wonder if it had anything to do with the other changes I had to make for it to fit the genres already out there. What did I learn from this? Screw the publisher’s rules and go with my instincts. I’ve since launched my own publishing company so that I don’t have to follow anybody’s rules but my own.

Michele: If you’re going to write in a genre, you should be aware of what’s out there. Your readers definitely will be. That doesn’t mean you have to follow the rules. The fun thing about writing is that you get to rewrite lore to fit your story. I’ve revised lore in all of my paranormal titles, reenvisioning the way werewolves evolved, changing vampire lore, and exploring hauntings and past lives. The key is to keep it interesting and make it believable to your readers.

Michele: Lacey taught me that sometimes lying will get you out of certain situations, especially if the person to whom you’re lying wants to believe you. It’s interesting how we can manipulate people with well-placed lies. They don’t have to be grand or overdone, as Lacey shows us in Kiss Me By Moonlight. They can be small, whispered things that blow up, like when she calls Dylan a manwhore and sparks a #manwhore reaction.

Just kidding. I suck at lying. Sometimes I wish I could lie like her. It would make some situations easier, but I can’t control my facial expressions that well. Yet.

Michele: Those who know me would argue that everything about me is a quirk. My writing quirks are pretty normal—I can’t write if people are behind me. My other quirks are more interesting: If I turn around, I have to unturn. I can’t walk under a ladder, which cracks my dad up because he grew up in rural West Virginia on a farm where they raised cattle and abundant superstitions. I tried telling him it had to do with claustrophobia, but he likes to think I’d make my great-grandmother proud, so I let him have it. I am claustrophobic. I don’t care to be touched by most people. I have to have peanut-butter on toast for breakfast or my whole day is ruined. I go crazy if things aren’t even (or symmetrical, depending on the circumstances). I had a student who found this out and used to change the blinds in my classroom so that they weren’t level. He thought it was hilarious until I threatened detention. Those things weren’t easy to level out. I’m moving back to that classroom this year, and I’m planning to hang curtains. In the comments, I’d love to hear about YOUR quirks.

Michele: I pants first and plot later, and that doesn’t just pertain to my writing style. I’m impulsive with everything. One time I decided to make a quilt. I chose a grandmother’s flower garden design because it was the design of the quilt on my bed when I was little. It had been hand-sewn by my grandmother and great-grandmother, and my cousin (not related to that grandmother) got mad at my mom one day and cut it up. It was the only thing my dad had left from his mother (who had passed away when he was eleven), and it devastated him. So fifteen years later, I decided to make him a replacement. The only problem? I didn’t know the first thing about sewing. It turns out you can’t just do it. You have to lay it out, measure things and all that planning stuff. My best friend’s mother is a quilter. She laughed when I told her my dilemma, but then she taught me the necessary skills. Two and a half years later, I presented my dad with a gorgeous, completely hand-sewn quilt. (To this day, I do not use a sewing machine.)

Michele: This took me a minute because I had to figure out right and left. A copy of Schooled by Gordon Korman is to my right. Lego Chima sets are to my left. My kids really need to clean off the kitchen table.

Michele: What motivates you most to pick up a new novel?

Hey there. It’s Lacey again. Falling in love and landing Dylan hasn’t been the panacea I thought it would be. For starters, he moved into my apartment without asking, and he continues to have no respect for my need to have things in sets of six. Pile that on top of my emotional upheaval after losing my stepfather, and you have a recipe for disaster no amount of German chocolate cake can cure.

Yes, Lacey Hallem’s life remains fraught with challenge, but you know she’s a fighter. Forming a talent management agency with her best friends has been the best career move she’s ever made—even if it’s the only thing currently working according to plan. Lacey’s OCD is getting the better of her, and this time her hands aren’t the only casualty. When her lies ruin her relationships with both Kiss Me Goodnight and Dylan, she’s forced to confront her demons in ways she’s never had to before. As she once again faces her past, can she learn once and for all to let love and friendship through the barriers she’s built?

Both harrowing and hilarious, this conclusion to the tale of Lacey and Dylan will leave you laughing, crying, and fanning yourself—sometimes all at once. Michele Zurlo triumphs again in this moving story about life’s quirks and what we all have to do to get by.

On the way home, Dylan fumed silently. I drove this time, as he tended to speed and cut people off when he was in a sour mood. When we were almost to my apartment, he said, “Aren’t you going to apologize?”

I glanced at him, surprised he’d ask for me to lie. “I’m sorry?”

“I’m not sorry I said it. I’m sorry I hurt your feelings, but you know how I feel about that song.” I turned into the parking lot and found the space designated for my apartment.

“You called me a manwhore, Lacey.” His entire life, he’d slept with two women, one of whom had been his late wife. “That’s not the image we’re trying to project. We want fans to focus on our music, not our imagined bedroom antics.”

I got out of the car. This was another “discussion” Dylan wanted to have. You know what I’m spoiling for? An all-out fight. A lot of pent-up frustration and anger mixed with residual hurt and grief inside me, and that much emotion is going to demand an outlet if I don’t provide one.

On the plus side, the fact that I want to argue, scream, and yell boded well for the conditions of my hands. Perhaps that’s why Dylan listed those options earlier. He knew what I’d wanted before I did. I kind of resent him for that. People you were mad at aren’t supposed to be right or accommodating. Dylan managed to be both. Manwhore. 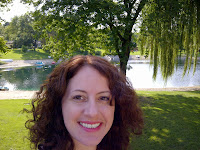 I’m Michele Zurlo, author of over 20 romance novels. I write contemporary and paranormal, BDSM and mainstream—whatever it takes to give my characters the happy endings they deserve. I’m not half as interesting as my characters. My childhood dreams tended to stretch no further than the next book in my to-be-read pile, and I aspired to be a librarian so I could read all day. I ended up teaching middle school, so that fulfilled part of my dream. Some words of wisdom from an inspiring lady had me tapping out stories on my first laptop, so in the evenings, romantic tales flow from my fingertips. I’m pretty impulsive when it comes to big decisions, especially when it’s something I’ve never done before. Writing is just one in a long line of impulsive decisions that turned out to showcase my great instincts. Find out more at MicheleZurloAuthor.com or @MZurloAuthor. a Rafflecopter giveaway
Posted by MJ Thomas at 4:00 AM