This post is part of a virtual book tour organized by Goddess Fish Promotions. Kathy will be awarding a $10 Amazon or B/N GC to a randomly drawn winner via rafflecopter during the tour. Click on the tour banner to see the other stops on the tour.

Thanks for dropping by It's Raining Books to chat with us today. If someone were writing a story about you, what would your blurb say?

The onetime late ’60s-early/’70s hippie folk-singing actress wannabe always wanted to write. Even as she pursued an education and short career in the theater, ideas for stories and fleshing them out proved far more fulfilling. As an author, Kathy draws on a vivid inner life to provide fodder for her novels, a mix of historical fiction and romance with a little fantasy thrown in.

I have nothing really new out. My last book was The Partisan’s Wife, the final book of The Serpent’s Tooth trilogy, which came out about three years ago. The blurb doesn’t include tiny details, of course, or how much fun I had doing the research. Or anything about the secondary characters. Basically it’s the story of a man and woman who have loved each other for a long time, but have been separated for years by a circumstances and a number of obstacles. (All of this is covered in the first two books, btw.) Now they’re together again, but the war is closing in around them and each must make choices. What was your favorite scene to write in this story?

I have a number of favorite scenes from Winter Fire. One that comes to mind is a scene about two thirds of the way through the book. When I wrote it, I had a very dramatic image in my mind of Ethan and Zara (the hero and heroine) standing slightly apart in the middle of a snow-covered corn field, the two of them silhouetted against the evening sky, its colors against the snow. It’s a hard scene for her, because she digs deep inside herself and her fears to explain that, as a stranger to her own people, she doesn’t blame him for having second thoughts about protecting her from a posse out to arrest and most likely hang her. She knows of the pain he relives over the memories she incites from his past. I like this scene for its quiet intensity and for getting to the heart of both their internal conflicts.

Good question. I wouldn’t trade places with any of my main characters; their lives are too angsty and complicated. Probably Mercy van Allen, a secondary character in The Partisan’s Wife. She’s a woman of some means, who lives with her mute, palm-reading sister on a farm along the Hudson River. Both are kindhearted but quite eccentric, with a soft spot for stray animals and people. But I’d only trade places for a day or two at most, preferably for no more than an hour. Eighteenth century life was hard, and I’d miss my modern comforts.

When Ethan Caine pulled the unconscious woman from the half-frozen creek, he had no idea that his world was about to explode. Dressed in quilled doeskin of Iroquois design, she stirred up dark secrets from his past. At the same time, she was everything he desired. But she was more Indian than white, and on the run for murder. He needed to know the truth. He needed to find it within himself to trust her.

Banished by the Seneca Indians who had adopted and raised her, ostracized by the whites in the settlement, Zara Grey wanted only to be accepted. “Ethancaine” treated her with kindness and concern. It was easy to trust him. But her Indian ways disturbed him, and in her heart she would always be Seneca.

She ran. Breathless, heart straining. Despite the stabbing pain in her side and the fire in her lungs, she forced herself on through the crackling underbrush. The cold wind whipped hair in her eyes. Briars tore her face and hands.

Yet with each labored stride, the soldiers' shouting voices drew closer. She dared not look back for fear of losing ground, dared not avert her eyes from the forest path.

But where was she to run? As if the question were an obstacle in her path she stumbled to a halt.

There was no one to help her. The People had gone, taking with them all help, all hope. She was alone. The outcast. Nameless.

Gasping, she slumped to her knees into the dew-drenched leaves.

The witch Jiiwi is no more!

The truth of it choked her. She set her teeth against the cry of anguish rising in her throat. She could have chosen death! Death at the hands of The People would have been swift. Nichus, her-husband-no-longer-her-husband, had assured her.

But her fear of death had been stronger than her fear of the unknown. She had chosen life. And with it, banishment.

She tore wind-blown hair laced with leaves and twigs from her face and glanced back over her shoulder. The soldiers were nearly upon her.

Five of them. They slowed their pace. Perhaps they knew she could run no more. They approached as if puzzled, talking among themselves. "Savages musta left her behind when they sneaked off," one of the men said. "Why d=you suppose...?"

“Hotakwih!" she said to herself, unable to hold back the tears. It is finished. Raising her eyes to the sky above the autumn colored hills, she whispered, "Hohsah" It has begun. She bowed her head. “Haywokahweh!" I have gone in a circle.

When the blue-coated soldiers caught up with her, she no longer had the strength or the will to resist.

Two of them edged closer to her in the shadows. "Here, we're not going to harm you," one said, his voice a raspy whisper. "Do you understand?"

She could not bring herself to look at them. Soon they would do more than talk. She knew. Soon they would see what she was. They would take her away. Take her back. Back to where the circle had begun.

“Not so close,” the other man ordered. “Give her room. You"re scarin' her.”

A twinge of unease rippled through her stomach. These were the same blue coats that had left a trail of ashes where thriving villages once had stood, who girdled the fruit trees so they would wither and die, who laid waste the fields of corn and squash and beans. She had seen them before, in her dreams. Her dreams had shown them the way.

“Good God!” Another of them cried out. “She's white! The woman's white!”

The first man knelt before her. “Do you speak English? Can you tell us your name?”

She would not trouble herself to reply.

“Here!” A man fumbled in his pack, producing a slice of jerky. He extended it just beyond her reach, an attempt to lure her closer, like a starving dog. But she would not oblige him. “I'll wager you're hungry.”

She lifted her head slightly and eyed the meat with longing. Three days of subsisting on nothing but roots and groundnuts had left her light-headed and weak. But she would accept none of their food. She looked down at the leaves.

“Suit yourself,” the man grumbled, and tore off a piece with his teeth.

In the distance, the shouts of men rose above the morning stillness. An acrid odor wafted on the wind through the trees. Across the meadow, lush with green grasses, beyond the expanse of ripening fields and orchards, the soldiers had set fire to the village.

From a place deep inside her, as if awakened by the sounds and smells, an old terror forced itself past the dust of forgotten memory.

Voices from the past rang out across time. Silenced for so long, they gained new strength and force on the billows of smoke darkening the sky.

Mama! Her own voice. The voice of the child she had been.

For as long as she could remember, her dreams had been filled with fire and smoke. And a savage host tore her from one world and thrust her into another. So it had been in the past. So it would be again.

“Haywokahweh!” she said, and she closed her eyes.

The circle was complete. 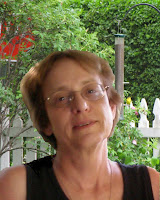 As a child Kathy wanted to be a writer when she grew up. She also wanted to act on the stage. After receiving an MFA in Acting from the Mason Gross School of the Arts and playing the part of starving young artist in New York, she taught theater classes at a small college in the Mid-West before returning home to the East Coast, where over the years, she and her husband raised two kids and an assortment of dogs. During stints in advertising, children’s media publishing, and education reform in the former Soviet Unions, she wrote whenever she could.

Her love of early American history has its roots in family vacations up and down the East Coast visiting old forts and battlefields and places such as Williamsburg, Mystic Sea Port, and Sturbridge Village. During this time, she daydreamed in high school history classes, imagining the everyday people behind all the dates and conflicts and how they lived.

Claiming her best ideas are born of dreams, Kathy has written a number of stories over the years. Her first published novel, Winter Fire, a 1998 Golden Heart finalist in historical romance, was reissued in 2010 by Books We Love, Ltd., which also released Lord Esterleigh’s Daughter, Courting the Devil, and The Partisan’s Wife.

When not writing, she enjoys reading, cooking, photography, playing “ball” with the dogs, and rooting on her favorite sports teams.