Hers to Bear by Tamara Hoffa - Interview and Giveaway

This post is part of a virtual book tour organized by Goddess Fish Promotions. Tamara Hoffa will be awarding a $50 Amazon/BN GC to a randomly drawn winner via rafflecopter during the tour. Click on the tour banner to see the other stops on the tour.

Tamara, welcome to It's Raining Books. Why do you write in your genre? What draws you to it?

Well, I don’t write in just one genre. I have written in several. My first book was a Military romance. I wrote that one because both of my best friend’s sons had just enlisted in the Armed Forces, I was drawn to the idea of a widowed mother afraid of losing her son to the military. My next four novels were Western Contemporary. I live in Tennessee and growing up I showed Quarter horses. So cowboy romance seemed a perfect fit. I do love cowboys, But what I always wanted to write was paranormal romance. I’m an avid reader, and probably 70% of what I read is paranormal romance. I have always loved the genre, shifters in particular. One of the elements of shifter romance that fascinated me was the “mate bond” that instant attraction that neither party could deny or at least not the shifter.

Paranormal romance also leaves so many opportunities open for plot lines, fights between shifter clans, shifters and humans, someone in clan trying to take over… the possibilities are endless!

However, my stubborn muse never whispered a shifter story into my ear until recently, and then she decided we had a whole series to tell!

The only real research I had to do for Hers to Bear was on a map. I needed to look up how far it was from Vest Virginia to the Smokey Mountains and how long it would take them to get there. Oh, I did also look up the size of Grizzly bears, but since this is contemporary, no other world building was required. However, for the second book in the series, I am constantly on the net! The heroine in book 2 Bear Hearts has a PHD in Bio chemistry and I have been looking up everything from how long it takes to get a PHD, courses required, etc. to the many things I need to know about her experiments in finding a cure for cancer using shifter blood.

So, in answer to your question, it really depends on the book and what you’re writing about. How much you personally know about the field and how much you need to research. I always want to be as accurate as I can and I do my research. I had a reviewer say she was impressed with my military romance and how accurate the research was, and she was former military. That was one of my favorite reviews!

I think I learn something new from every character I write. My characters are all in some way an extension of me, so I am exploring my own personality with each excursion into a novel. From Jenna I think I learned you have to stop being afraid to go after your dreams. Sometimes the fear of failure gets in the way of our own happiness; we are so concerned that things won’t turn out the way we are hoping, that we just don’t try at all. If we can’t have that Currier and Ives Christmas, why celebrate? That’s like admitting failure without even trying.

I’m not a superstitious person, and I don’t think I have any real quirks, unless you consider an addiction to coffee a quirk. When I write, I must have my trusty coffee at my side. I try to write for a minimum of two hours at a time, or at least a thousand words. I know many authors who can sit down can whip out four or five thousand words at a time. That’s not me. I write slowly. The most I’ve ever written in one session was four thousand words and that took me six hours. Usually, after about a thousand to fifteen hundred words I reach a stopping point in my mind and I quit for the day. I never force my words.

Are you a plotter or pantser? As you can probably see from the answer above, I am a panster. I do have general plot; I know the main plot line, but not the small subtleties, those happen as I write. I know it sounds crazy, but my characters talk to me; they play out the story in my head and tell me what’s going to happen when. That’s why I can’t force the words. A lot of times if I’m in a quiet place the words start coming to me; my DH says I need waterproof paper, because when I’m in the bathtub I am always writing scenes in my head. Lol. And I swear they never come out as good when I get to the computer to write them down!

To my right is my entertainment center, on the shelf directly next to me are my angel music boxes. I collect both music boxes and angels, so I have many that overlap. There are seven on that shelf. My favorite is a little boy angel that reminds me of my son; he is sitting with his knee drawn up and his arms crossed over his knee and his head resting on his arms, wings spread behind him.

I have two irons in the fire: a short military romance, that I’m hoping will be in a military anthology in May. My story is called Changing Tides and is about a military widow and Navy doctor. The second is book 2 in the Animal in Me series, Bear Hearts. It is a novella and is due out in May.

What is your favorite genre in romance? Why?

Twenty-five and never been kissed, Jenna Raynes is a beautiful woman with a rubenesque figure often overlooked by men. In the mood for a little honey, the sassy new schoolteacher is stopped in her tracks by one growled word from an alpha bear…“Mine.”

Bern Helms’ inner bear catches the scent of his destined mate. His animal’s desire is drawn to her curves, but Jenna is human, and not lured to him by instinct. Convincing her begins as a sizzling, sweet affair that is soon spoiled by danger. In their small backwater town, nerves are strung taut. Someone is abducting shifter children.

When confronted, Jenna is as protective of her students as a mamma bear. For Bern, all bets are off when the kidnappers take Jenna too. Nothing will keep a bear from his mate. The hunters will become the hunted…

“I’ve never had a boyfriend before.”

“I think perhaps then all the men you have met before have been blind and stupid, but I am glad they were because it saves me from having to hunt them down and kill them.” Bern growled.

Jenna stopped dead in her tracks and gazed up at him in stunned silence. He was serious. Bern shrugged his shoulders and planted a kiss on the end of her nose. “I cannot help it. I am a jealous man.”

They continued walking in companionable silence and reached Jenna’s house in a few minutes. She unlocked the front door and Bern held her back from entering. “Let me check the house first please.”

He left her standing on the front porch while he took the bags into the house. She saw the lights flip on methodically throughout the rooms and then Bern returned to the porch. “All clear,” he said and pulled her into the house. He attempted to pin her against the wall and kiss her senseless, but Jenna put her hands on his chest and pushed. It was like pushing against a brick wall!

“Oh no you don’t, Mr. Bear. This honeycomb is closed until I get some answers. Get your furry butt to the kitchen and you can talk while I make dinner. I want to know what the hell is going on around here.”

Bern had the good grace to look sheepish. “Yes, ma’am,” he said and strode toward the kitchen, leaving Jenna to follow that delectable and at the moment, not in the least bit furry backside. Oh yum. 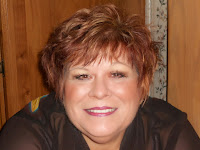 Tamara Hoffa lives in central Tennessee, with her husband of 30 years, her parents, 2 dogs and 2 cats. She started reading at four years old and has rarely been seen without a book since. At home you will usually find her in “nana’s chair” with her kindle, her laptop or one of her precious, precocious grandsons in her lap. Tamara is an author, an editor, and reviews/promotions coordinator for Secret Cravings Publishing. Tamara is proof positive that it’s never too late to reach for your dreams.