Warrior Mine by Megan Mitcham - Spotlight and Giveaway

This post is part of a virtual book tour organized by Goddess Fish Promotions. Megan will be awarding a $15 Amazon or B/N GC to a randomly drawn winner via rafflecopter during the tour. Click on the tour banner to see the other stops on the tour. 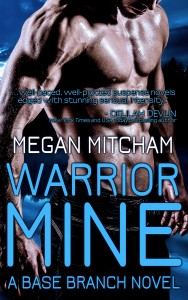 Warrior Mine - Base Branch Novel 4

The Base Branch office in Washington D.C. is so heavily fortified it makes Fort Knox look like a 7-Eleven. After twenty years in covert ops, nothing fazes Commander Vail Tucker. When a lightning bolt of feminine fury crashes into the interrogation room, holds him at gunpoint, and takes over the task with his prisoner, he’s more than surprised. She escapes without a trace, but Vail is unable to remain dispassionate. He must know what is so important the beguiling woman would risk her life to find it.

Carmen Ruez is deadly and desperate—a combustible combination. Born into the remnants of the Arellano Felix Organization, drugs and violence kept her in a gilded cage—until a twist of fate showed her the roots of their riches, making her yearn for freedom. She works for it. Fights for it. But her brother crosses the line to keep her loyal to the treacherous family she is determined to leave behind.

Following instinct, Vail uncovers Carmen's motives and is galvanized by a protective instinct he hadn't known he possessed. Determination and desire force them to work together to defeat those loyal to Carlos Ruez and the AFO. But are those traits enough to make them fight for a future together?

Enjoy an excerpt: She showed him her empty hands. His sweaty head shook. Droplets of his effort slung gently from his hair. “How is it you sneak up on me? Three times now. No one sneaks up on me. They try.” He heaved a breath and every slab of muscle flexed and never seemed to relax. It took a full minute of silence for her to realize he wasn’t holding his breath or holding himself at full tilt for battle. Those blessed grooves that lined a perfect—Santa María, was that eight—eight pack jammed between obliques worth drooling over.

Her name on his lips nearly toppled her down the three small steps in spite of the agitation suppressed in his tone. She grabbed the railing and made her way to the dirt, struggling to remember why exactly she’d come out in the first place.

At least some part of her fuzz-filled brain operated properly.

Her mouth moved to answer, but he walked forward, short-circuiting her synapses. Closer and closer he came until his chest nearly collided with her shoulder. She caught a gasp between her lips, just barely, as he reached around her to the shirt she hadn’t seen on the opposite railing. He dragged the cotton over his face and chest and then arched a brow, which she missed for a while, staring at the spray of nearly white scars and one vibrant pink ruck of angry skin.

She swallowed. “I’m so sorry for shooting you.”

“I don't blame you.” He stared at her and blotted at the sweat on his arms.

“How is that possible?” The slenderness of her voice translated her disbelief.

“I’d have shot you to save my family.”

“You have a family?” She didn’t know why the thought surprised her. He was a very desirable man. Handsome as red-hot sin. Kind as the Pope. Able as anyone she’d ever seen.

Carmen’s heart stuttered and she rubbed at the ache. “I’m sor—”

He stopped her with the smallest shake of his head. He didn’t want her sympathy. Tough. He had it all the same. Though she’d had nightmares about it daily for the last few weeks, she couldn’t fathom loosing Sophia, much less a family. She wondered what happened to them, but wouldn’t ask. It explained the hint of sadness she’d seen in his eye the moment he’d turned on her in the office.

“About earlier. I didn’t mean to rip your head off and eat it for dinner.”

“No?” he asked, with a shifty brow and the barest hint of a smile. 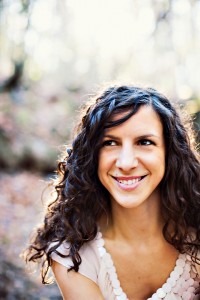 Megan was born and raised among the live oaks and shrimp boats of the Mississippi Gulf Coast, where her enormous family still calls home. She attended college at the University of Southern Mississippi where she received a bachelor's degree in curriculum, instruction, and special education. For several years Megan worked as a teacher in Mississippi. She married and moved to South Carolina and began working for an international non-profit organization as an instructor and co-director.

In 2009 Megan fell in love with books. Until then, books had been a source for research or the topic of tests. But one day she read Mercy by Julie Garwood. And Oh Mercy, she was hooked!

Buy the book at Amazon, iBooks, or Kobo.