This review is in conjunction with a virtual book tour organized by Goddess Fish Promotions. The author will be awarding a $20 Amazon/BN GC to a randomly drawn winner via the rafflecopter at the end of this post during the tour. Click the banner above for other stops on the tour.

Despite his stunning good looks, Dr. Malcolm Vashal is perhaps the most detested professor on campus. A floundering career and the aftershocks of a painful divorce have left the thirty-four-year-old with more than a little self-loathing, which only grows when he meets Maren Gardner. The graduate student with the loyal heart and searching eyes is much too good for him. She is off-limits for more reasons than one, but Malcolm can’t seem to resist her.

Maren is facing the greatest loss of her life, and her family needs her now more than ever. Between caring for them and building her future, Maren doesn’t have time for a social life, much less a relationship, but she can’t push a certain green-eyed professor from her mind. She sees in him a goodness that others don’t, but that might not be enough.

As the two discover each other, their blossoming friendship soon turns into something more, but self-doubts, family tragedy, and personal demons stand in their way.

Can they overcome these odds and share a love that each desperately needs? Or will the end of the semester find them heartbroken?

This is a powerful debut novel. Ms. Fournet has given us two unforgettable characters in Maren and Malcolm.  They are well-drawn, rounded characters--especially that of Malcolm. There was such a growth in this character over the course of the novel. I really enjoyed seeing him able to show his gentle side and his caring, because in the first chapter of the book, I didn't really like him at all.

The book started off a little slow, but it took on a pacing that worked for the story. There were several moments that I thought I knew what was going to happen next, but the author managed to avoid the obvious and take the story in another direction. Possibly the author missed a chance at adding another element of excitement to the story in avoiding these, but then it would have been a different story.

It was more a journey of self-discovery on Malcolm's part than it was an effort of the author to write a dark tortured student/professor relationship tome.  I was a little surprised about her family's reaction, but given the situation her family was dealing with (and their knowledge of Maren), maybe I shouldn't have been.

Ms. Fournet's writing was almost lyrical in parts. It was a pleasure just to read her prose. All in all, this was a very enjoyable story and I look forward to her next book.  4 flowers.

He had gotten through his second tomato—while The Red Hot Chili Peppers’ “She Looks to Me” played— when the knock at his kitchen door stilled him.

It wasn’t that it never happened. Of course, the mailman came to the door occasionally. Or the UPS carrier. Chinese takeout. But Malcolm was expecting none of these. A wave of chills spilled down his neck because it could only be one person.

Impossible. It’s a Jehovah’s Witness or a Girl Scout.

In the two seconds that it took to cross to the door, Malcolm was aware of a sickening hope that coursed through him. He opened the door, and there she was.

Dressed for a run, Maren stood on his doorstep, biting her thumb, hesitant and unsure. Perspiration dotted her nose and upper lip, and her cheeks were flushed with exertion and, perhaps, bashfulness. Malcolm took in the most beautiful sight he’d ever seen.

She had come looking for him.

Before either of them said a word, Malcolm knew that he was a lost cause. He might be able to feign mere friendship, but he was a goner. Whatever she wanted from him was already hers. He didn’t stand a chance.

“Well,...this is a pleasant surprise.” 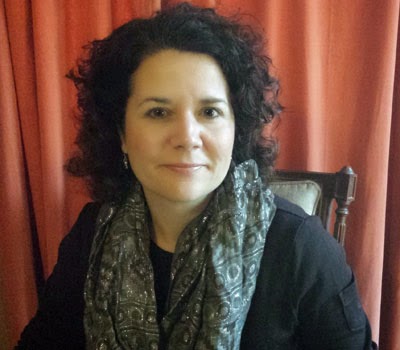 Stephanie Fournet lives in Lafayette, Louisiana—not far from the Saint Streets where her novels are set. She shares her home with her husband John and her daughter Hannah, their needy dogs Gladys and Mabel, and an immortal blue finch named Baby Blue. When she isn’t writing romance novels, she is usually helping students get into college, teaching AP English, or running. She loves hearing from fans, so you can follow her on Facebook, message her on Goodreads, or email her at stephaniefournet@icloud.com.