This post is part of a virtual book tour organized by Goddess Fish Promotions. Mia will be awarding a $25 Amazon or B/N GC to a randomly drawn winner via rafflecopter during the tour. Click on the tour banner to see the other stops on the tour.

Welcome to It's Raining Books, Mia. I hear you're feeling brave enough to share five things about yourself we might not guess or know.

Thank you for welcoming me to It’s Raining Books on my Love Spell Book Tour! I really like your guest blog post idea. It’s a new one for me. And I’m gonna have to think about it for a while.

Okay. I’m back. I think I’ve come up with a few mini-shockers. Just kidding… but there is some information here you might not have guessed about Mia Kerick.

As a high school student, my goal was to be famous. Yes, I wanted to be a star. I tried to sing my way to stardom (private classical vocal lesson for years), to strut my way there (lots of beauty pageants), to act my teenage butt off (summer stock theater), as well as to model. In my efforts to be a model, in high school I did some stupid things I would be furious at my children for doing, such as following a supposed photographer deep into a woodsy park, hanging a curtain in the trees to change my clothes behind, and modeling bathing suits and jumpsuits while leaning on rocks and trees. Sounds like a Criminal Minds episode waiting to happen, doesn’t it? (Luckily, it wasn’t.) As a freshman at Boston College, I hadn’t yet lost my desire for fame so I went to Newbury Street in Boston, dressed glamorously and carrying a handful of pictures from my potentially hazardous photo shoot in the woods, and visited various modeling agencies. At one agency, a top-dog-like man came out of his office, glanced at me briefly, and immediately proclaimed, “Her nose is too wide.” One agent asked no one in particular, “Why do all pretty girls think they have what is takes to be a model?” Still another told me, “Lose twenty pounds and come back.” (At 5’6”, I weighed 114 pounds back then.) But one agency, a children’s agency, was interested. I returned to Newbury Street within the week for my portfolio to be shot, and I will say, for a children’s agency, the photographer certainly took some risqué pictures of me. This was my last venture into modeling, as I suddenly became enthralled with the notion of being a high school social studies teacher. But I forever worried that my high school students would come across a racy picture of me online that would… um… interfere with my teaching career.

That revelation was long. Let’s count it for two, shall we?

My next revelation will be more of a confession. As far as television goes, I am addicted to crime and baseball. Nothing else is worth watching, in my humble opinion.

Let’s start with the crime shows I love to watch. I enjoy crime of all types. (No, I don’t enjoy it when crime actually occurs in real life, but there’s just something about the detective story—the horrifying crime, the examination of the facts, the science of the forensics, the pressing drama—that hooks me and drags me in.) I enjoy some weekly series, like Criminal Minds, CSI (I only like Miami and Las Vegas), and Law and Order in all of its varieties. I watch the same episodes over and over without getting bored or frustrated. There is nothing better than an all-weekend Law and Order Marathon—ah, there’s nothing like it. And true crime shows—I’m pretty much addicted to them. For some odd reason, they relax me. (Yeah, go figure.) Forensic Files is a favorite, as is EVERYTHING on the new ID television station on my cable. As a matter of fact, a repeat of 48 Hours is on right now. Comforting background sounds for my writing efforts.

And then there’s baseball. Could anything be more different from crime than baseball? Maybe, but I can’t think of it right now. I guess it’s because I understand baseball that I enjoy it. I (for the most part) am cool with the rules and the strategy. I get to know the guys on my team, The Boston Red Sox, by May, and I start to care about them. (I truly want them to be pleased with their own performances on the field. It is my top priority as a baseball fan.) I enjoy the “low-key” nature of baseball that haters call “boring”. Baseball is an in-control type of sport, except for the occasional bench-clearing brawl, and like crime stories, I find it comforting.

I don’t, however, write novels focusing on crime or baseball. Writers are quirky people, huh?

Hmm…. What else shall I tell you about me? Here’s a big one, and it relates to my romance writing. I have wanted to get married ever since I was eleven. Well, when I was eleven, I didn’t see what I longed for as “marital bliss”, but I remember back in the summer after fifth grade when I saw couples holding hands on the beach that I wanted what they had. And since the age of sixteen, I was definitely actively searching for Mr. Right AKA Mr. Permanent. It took me until I was almost twenty-seven to find him. Ironic, isn’t it?

One more interesting fact that you would never guess…. I have never been bored in my life. Never. My mind, like my main character Chance César’s in Love Spell, tends to overthink things. I actually hate to go to bed at night because I like being awake and thinking. So, I push off bedtime until 3AM or so. (I keep very odd hours.)

And now you know things about Mia Kerick that my four children do not know.

Strutting his stuff on the catwalk in black patent leather pumps and a snug orange tuxedo as this year’s Miss (ter) Harvest Moon feels so very right to Chance César, and yet he knows it should feel so very wrong.

As far back as he can remember, Chance has been “caught between genders.” (It’s quite a touchy subject; so don’t ask him about it.) However, he does not question his sexual orientation. Chance has no doubt about his gayness—he is very much out of the closet at his rural New Hampshire high school, where the other students avoid the kid they refer to as “girl-boy.”

But at the local Harvest Moon Festival, when Chance, the Pumpkin Pageant Queen, meets Jasper Donahue, the Pumpkin Carving King, sparks fly. So Chance sets out, with the help of his BFF, Emily, to make “Jazz” Donahue his man.

An article in an online women’s magazine, Ten Scientifically Proven Ways to Make a Man Fall in Love with You (with a bonus love spell thrown in for good measure), becomes the basis of their strategy to capture Jazz’s heart.

Quirky, comical, definitely flamboyant, and with an inner core of poignancy, Love Spell celebrates the diversity of a gender-fluid teen.

Lost: One Rat’s Ass, $10,000 Reward if Found and Returned In Good Condition to Rightful Owner

My parents are what you might call “rather apathetic” with regard to their sentiments toward the one who will, in theory, carry on the César name. Or at least that’s how I see it. Fair warning—I’m a person who likes to call spades exactly what they are. And even if I so badly wish the spade was a club, I still call the frigging thing a spade. So yeah, when I was young, I used to pretend like Mom and Dad gave a crap, but you can only pretend for so damned long. Now that I’m seventeen, any and all remnants of the “I love you, you love me—we’re a happy family” charade are ancient history.

Nope. They don’t give a rat’s ass about their only child, Chance.

Now don’t get me wrong—Mom and Dad possess no wish for lousy shit to fly my way. They just aren’t into the whole parenting thing, and I figure that’s their right.

But on the brighter side, they don’t give a rat’s ass that I’m gay. Nope, there’s no horrific, scarring homophobia going on in the César family home. And get this: my big “coming out of the closet” last year consisted of three lines of dialogue between my parents and moi:

Me: Mom, Dad… I’m gay… and I just thought you guys might want to know.

Nope, nothing emotionally scarring there.

Good thing I’m the kind of guy who chooses to focus on the positive. I can walk around the house in full female stripper garb, and nobody bats an eyelash. If I conjure up any reaction at all, it might be that my mother asks me where I bought my sexy stretch-lace naughty knickers, as she’s been looking for ones in that color. And speaking of color choices, neither Mom nor Dad said a single word when I showed up with my hair dyed the flamboyant shade of a Cheez Doodle. Not only do I have complete freedom with how I express my personal style, but when I go all drama-queen mode on their asses, my parents just look at each other and shrug. In fact, I try—and I try fucker-nelly hard—but I just can’t shock these people.

I can barely get them to notice me. 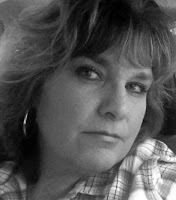 Mia Kerick is the mother of four exceptional children—all named after saints—and five nonpedigreed cats—all named after the next best thing to saints, Boston Red Sox players. Her husband of twenty-two years has been told by many that he has the patience of Job, but don’t ask Mia about that, as it is a sensitive subject.

Mia focuses her stories on the emotional growth of troubled young people and their relationships, and she believes that physical intimacy has a place in a love story, but not until it is firmly established as a love story. As a teen, Mia filled spiral-bound notebooks with romantic tales of tortured heroes (most of whom happened to strongly resemble lead vocalists of 1980s big-hair bands) and stuffed them under her mattress for safekeeping. She is thankful to Dreamspinner Press, Harmony Ink Press, CoolDudes Publishing, and CreateSpace for providing her with alternate places to stash her stories.

Mia is a social liberal and cheers for each and every victory made in the name of human rights, especially marital equality. Her only major regret: never having taken typing or computer class in school, destining her to a life consumed with two-fingered pecking and constant prayer to the Gods of Technology.

Stop by Mia’s Blog with questions or comments, or simply share what’s on your mind. Find Mia on Facebook (http://www.facebook.com/mia.kerick), Goodreads (http://www.goodreads.com/author/show/6474518.Mia.Kerick), and Amazon (http://amazon.com/Mia-Kerick/e/B009KSTG9E/).

a Rafflecopter giveaway
Posted by MJ Thomas at 2:00 AM