A Thin Slice of Heaven by p.m. terrell - Q&A and Giveaway 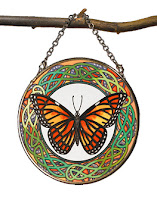 This post is part of a virtual book tour organized by Goddess Fish Promotions. p.m.terrell will be awarding a Celtic Butterfly Suncatcher similar to the one mentioned in the book, symbolizing both the never-ending cycle of life and the metamorphosis of a butterfly to a randomly drawn winner via rafflecopter during the tour. Click on the tour banner to see the other stops on the tour.

Welcome back to It's Raining Books, p.m. If someone were writing a story about you, what would your blurb say?

I hope it would say that I always tried to bloom where I was planted. My life has been the opposite of a well-planned one; it’s been filled with unexpected twists and turns, seemingly insurmountable challenges and devastating heartbreak. But with each detour I’ve encountered, I have tried to remain positive; I’ve looked for the possibilities in every place and circumstance I’ve found myself in, and I have tried to make the world a better place because I’ve been here.

If you believe in life beyond what we can see with the naked eye, this story will capture your imagination. I wasn’t prepared for the number of people who had lost loved ones and told me how comforting the story was to them. They had all felt their loved ones once they had passed on; they’d heard a whisper of a voice, saw a fleeting, filmy image, or felt their presence in dozens of different ways. Reading A Thin Slice of Heaven, especially Sean’s explanations of passing to the other side and communicating with those who had been left behind, spoke to them—and I hope it speaks to you as well.

It was when Sean showed Charleigh how ghosts can become visible and even physical. He began slowly, explaining the field of energy around each person, but the scene progresses to a fever pitch. I had great dreams for weeks after writing that scene! I researched reported physical contacts with spirit entities, ranging from haunted houses to visits in the night; how living beings displayed evidence of having been touched—from finger indentions in their skin to scratch marks—and I also reviewed scientific evidence supporting the theory of parallel universes. It is a fascinating subject for me, and taking Charleigh and Sean to dramatic, sensuous heights was something I’d never written before.

I’d trade places with Charleigh; Sean loves her so unconditionally and so deeply that any woman would be crazy not to want to be in her shoes.

She had arranged to meet her husband in Northern Ireland for a second honeymoon, but when Charleigh arrives at the remote castle, she receives a message that he won’t be coming—and that he’s leaving her for another woman.

Stranded for the weekend by a snowstorm that has blocked all access to the castle, she finds herself three thousand miles from home in a country she knows nothing about.

She is soon joined by Sean Bracken, the great-grandson of Laird Bracken, the original owner of the castle, and she finds herself falling quickly and madly in love with him. There’s just one problem: he’s dead.

As the castle begins to come alive with secrets from centuries past, she finds herself trapped between parallel worlds. Caught up in a mass haunting, she can no longer recognize the line between the living and the dead. Now she’s discovering that her appearance there wasn’t by accident—and her life is about to change forever.

A movement caught her eye and Charleigh started, whirling around. No one was there. She laughed nervously; no doubt, it had been a bird outside the window, its reflection caught in the mirror. Still, she returned to the door. There was a simple doorknob lock which seemed woefully inept, but she quickly recognized a thick piece of wood standing against the wall as an old-fashioned bar, and slipped it into place. It was better than a deadbolt, she reasoned.

She kicked off her shoes and checked her cell phone again. Finding no reception, she returned to the window and held it aloft until a weak bar appeared.

The phone beeped, causing her to jump, as a text message appeared.

She stared at it, not realizing that she’d been holding her breath until it expelled in a whoosh that left her dizzy.

The sound of the man’s deep, rich voice startled her and she spun around. No one was there. The bar remained across the door. There were no blind spots in the room; it was circular and plainly, though tastefully, furnished. She strode purposefully to the bathroom. A set of candles blazed on the countertop and though the shadows danced in the corners of the room, she could clearly see that she was alone.

Yet she could not have imagined it. The tone had been resonant and almost gravelly, the timber of a man’s voice upon first arising. The brogue had been both commanding and melodious.

But as her heart stilled and her mind allowed the words in the message to sink in, she realized that Ethan was not coming. He perhaps had never intended to join her. And now she was stuck in Ireland as a snowstorm raged outside her windows, three thousand miles from home. 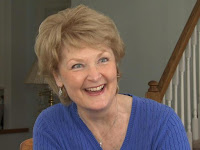 Prior to writing full-time, she founded two computer companies in the Washington, DC Metropolitan Area. Among her clients were the Central Intelligence Agency, United States Secret Service, U.S. Information Agency, and Department of Defense. Her specialties were in white collar computer crimes and computer intelligence, themes that have carried forward to her suspense.

She is also the co-founder of The Book ‘Em Foundation, an organization committed to raising public awareness of the correlation between high crime rates and high illiteracy rates. She is the organizer and chairperson of Book ‘Em North Carolina, an annual event held in the real town of Lumberton, North Carolina, to raise funds to increase literacy and reduce crime. For more information on this event and the literacy campaigns funded by it, visit www.bookemnc.org.