This post is part of a virtual book tour organized by Goddess Fish Promotions. Lori will be awarding one prize pack consisting of $25 Amazon/BN GC, plus a signed print copy of Fallback, as well as bookmarks and magnets (international) to one randomly drawn winner via rafflecopter during the tour. Click on the tour banner to see the other stops on the tour.

After being rescued from a brutal band of marauders, Ellen Hale rebuilt her life in the fortified neighborhood that became her home. A heartbreaking decision and devastating loss pushed her to become a fierce fighter, because weakness only got you and those you loved killed.

Now her community is facing a deadly threat, and Ellen has another choice to make.

Ellen volunteers as a member of fallback team three, tasked with establishing a temporary refuge for their citizens in the event their community is overrun by the enemy. As the danger intensifies, she and her adopted sister, Melissa, set off with the rest of their team on the road trip from hell.

Their mission is cloaked in secrecy, but suspicions of a traitor arise.

Something is affecting the zombies’ migration patterns, and when blacksmith Tyler Garrett is discovered trapped in a farmhouse, the team refuses to trust him. But Ellen believes his story, and it’s not just because of his rugged, blond good looks and soft-spoken manner—his skills can greatly benefit their team.

As the team struggles to reach the fallback, previously secure locations are overrun, and their chances of success seem remote. With the likelihood of a traitor nearly certain, and the lives of everyone she loves at risk, Ellen must figure out who to trust before the traitor—or the zombies—destroy them all.

Is there a spy among the fallback team,or is there another threat lurking in the Kentucky hills?


Enjoy an excerpt: Marcus took a quick peek around the doorframe, then stepped cautiously through, Anton close on his heels, rifle in the ready position. I stepped around the cluster of weapons and followed.

The room contained an un-made bed—presumably the source of the sheet—along with a dresser and a round side table, beside which the chair barricade had most likely sat. In the center of the room stood a tall, blond man with his arms extended straight out to his sides. I estimated him around 6’1”, and his worn t-shirt clung to broad shoulders and thick biceps. His hair must be long, as it was drawn back and secured behind his head. Jeans hung on lean hips and a short beard followed the curve of his jaw.

Stop staring, Ellen. He could be about to try to kill you.

“Name,” Marcus barked, machete in his hand, while Anton kept the gun pointed directly at the man’s face.

Lowering his machete but not sheathing it, Marcus asked, “Where you from, Mr. Garrett?”

Tyler dropped his head back for a second before looking at us, gaze lingering on me before returning to Marcus. “Listen, can I put my hands down? My weapons are in the hall, and I did go to a lot of effort to let you know what was in here without making a racket and drawing more of those dead bastards.”

Marcus made a circular motion with the tip of his blade. “Turn around, real slow. If I don’t see anything worrisome, we’ll talk.”

Tyler started a cautious turn to his right, proving my hunch about long hair correct. Anton never lowered his gun. As Tyler’s right hip rotated into view, Anton roared, “Knife!” The butt of the rifle was braced at his shoulder and his finger tightening around the trigger in an instant. 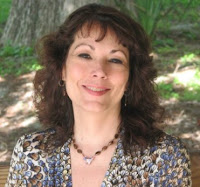 Lori spent her early years reading books in a tree in northern West Virginia. The 1980s and 90s found her and her husband moving around the Midwest, mainly because it was easier to move than clean the apartment. After seventeen frigid years in Minnesota, she fled to coastal North Carolina in 2013. She will never leave, and if you try to make her, she will hurt you.

She has worked in public libraries, written advertising copy for wastewater treatment equipment, and managed a holistic veterinary clinic. Her current day job, conducted from her World Headquarters and Petting Zoo (her couch) is as Managing Editor for Limitless Publishing, as well as editing for a select list of indie author.

Her dogs are a big part of her life, and she has served or held offices in Golden Retriever and Great Pyrenees rescues, a humane society, a county kennel club, and her own chapter of Therapy Dogs International.

She has been a columnist and feature writer for auto racing and pet publications, and won the Dog Writers Association of America’s Maxwell Award for a series of humor essays.

Parents of a grown son, Lori and her husband were high school sweethearts, and he manages to love her in spite of herself. Some of his duties include making sure she always has fresh coffee and safe tires, trying to teach her to use coupons, and convincing the state police to spring her from house arrest in her hotel room in time for a very important concert. That last one only happened once—so far—but she still really, really appreciates it.