This post is part of a virtual book tour organized by Goddess Fish Promotions. Tegon will be awarding a $25 Amazon or B/N GC to a randomly drawn winner via rafflecopter during the tour. Click on the tour banner to see the other stops on the tour.

After 27 years as a newspaper man, Peter Anderson’s career is slipping away, at least it was, until he stumbled upon the story of a lifetime. Sent to do a fluff piece about lights in the night sky over Arizona, he discovers far more than he ever expected when he comes upon a mysterious young woman held prisoner in a basement. After helping her to escape, she disappears before he can learn the truth about who she is or where she came from. His search for her leads him back to the lights in the sky and leaves him with more questions than answers. The only thing he knows for certain . . . the only thing he can count on are the two words offered repeatedly by his friend and guide . . . “IS BELT.”

"Shit," I breathed to myself. I hadn't expected this to be easy. It never had been in the past, but with Bob and Fred leading the way, we were screwed.

Fred scampered to his next position, waving us on to the rock he had just left behind when he felt the coast was clear.

It took us another fifteen minutes to cross the distance from where we first saw the house to physically touching the building.

I had to admit, my heart pounded hard in my chest, certain we were about to be caught as Fred pulled himself up to peer into a window.

"Clear," Fred whispered and we crept around the corner.

There were no cars, no trucks, no men with guns to be seen anywhere. Fred had hit it on the mark. For all outward appearances no one was home.

We continued to follow Fred as he made his way to a back door. Slowly, silently, he eased himself onto the porch kneeling before the door, slipping a hand into his shirt pocket.

Removing two small, shiny tools from its folds, he went to work on the knob.

Faster than I could say "is belt" Fred worked the lock, turning the knob. The door opened slightly.

We held a collective breath, waiting for the sound of an alarm.

"Clear," Fred whispered softly as he allowed the door to open fully. Crouched, almost on all fours, he scooted inside, closing the door behind him.

Unfathomable amounts of time seemed to slip by with each heartbeat as Bob and I stood outside in the dark and waited. 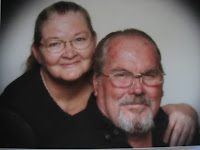 I was raised pretty much the same as everyone else... devoted mother, strict father and all the imaginary friends I could conjure. Not that I wasn't friendly, I just wasn't "people orientated". Maybe I lived in my head way more than I should have, maybe not. I liked machines more than people, at least I did until I met my wife.

The first thing I can remember writing was for her. For the life of me I can't remember what it was about... something about dust bunnies under the bed and monsters in my closet. It must have been pretty good because she married me shortly after that. I spent a good number of years after inventing games and prototypes for a variety of ideas before I got back to writing.

It wasn't a deliberate conscious thought, it was more of a stepping stone. My wife and I had joined a dream interpret group and we were encouraged to write down our dreams as they occurred. "Be as detailed as you can," we were told.

I was thrilled. If there is one thing I enjoy it's making people believe me and I like to exaggerate. Not a big exaggeration or an outright lie mine you, just a little step out of sync, just enough so you couldn't be sure if it were true or not. When I write, I always write with the effort of "it could happen" very much in mind and nothing, I guarantee you, nothing, makes me happier.