The environmental stilling on the planet of Nebura escalates, threatening to advance even beyond the world-girding storm ring. Meanwhile, Levrok's plan to arm a resurgent Siqdori Empire with a tulvar arsenal nears completion, and his departure off-world is imminent. Two survivors' groups join forces as events spiral out of control.

"NEW SIQDOR" is the 2nd book in the “Zero Point Light” SF series, and delivers a thrill ride of untold mayhem, hair-raising escapes, space colonization gone awry, and a descent to the ocean floor and beyond!

Aleesha turned to Turok. “How did your hunt for hidden crystals go?”

She turned to Mick. “You still want to establish a base on Polarica?”

Mick nodded. “Sending a beacon really is our only shot at being rescued.”

“A virtual beacon, of sorts,” Franklin added. “The planetarium gave us the idea.”

Mick smiled. “It was entirely Franklin’s idea, and we’ve since built on it.”

“We can deploy a holofield satellite,” Franklin said. “Then we’d send out a digital signal that the satellite should transmit as an FTL beacon.”

Mick shrugged. “Even after deployment, it’s not a sure thing. Hopefully it’ll be intercepted.”

“But all of this is moot unless we get to Polarica. And that depends on finding crystals, doesn’t it?” Carmen said, ever the realist.

“That’s true, there are no crystals,” Turok said. “But we may have found an alternative.” He was grinning.

“The very same.” Turok had folded his arms.

“Tell us again about the crystals,” Carmen said, smiling.

Thomas emptied his cooled coffee into a soup bowl and poured himself a fresh cup. “There are no crystals, period. But Turok’s hybrid nuclear sub should serve our purpose.”

Mick laughed. “I’m bursting to know what a nuke sub is doing in Oceangate, but first – can you get it running?”

“I hate to be a spoilsport –” Carmen began.

“No you don’t!” Turok laughed.

Carmen scowled. “Maybe we should keep looking for crystals? After all, isn’t all the power here in Watyra from crystals? There must be some way –”

“True, the power here is from crystals,” Thomas said. “But they’re also embedded in the landline stations. There’s no way to adapt those into portable crystals.”

Mick turned to Turok. “You’re serious about this?”

“We found a pallet of arc components for its circulation reactor. It looks like we have everything we need.”

“We accessed the ship’s emergency power node and did a quick start-up test,” Thomas added. “All systems worked fine.”

“This is great,” Mick said as he sat back down. “We have to assume Rainer was right, that Polarica remains unaffected by the stilling, for now. That’s one reason to go. A second is to deploy this holobeacon.”

“Assuming we find a way to do it,” Thomas added.

“In the record there’s a facility near the Pole where it should be possible,” Mick said.

“Well, how soon do we need the sub up and running?” Turok asked.

“The sooner the better,” Mick said, glancing quickly at Carmen. 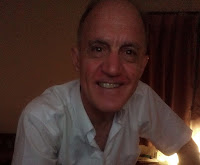 Stephen J Carter is a Canadian writer living in Chiang Mai, Thailand. He completed a PhD in Social and Political Thought at York University in Toronto in 1997. This led to an 8-year period of teaching at universities in South Korea, Taiwan, and Thailand. In 2006 he settled in northern Thailand, and began writing fiction full-time in 2007.

In his early years he made several short-term forays into film and video production while involved full-time in academia. Along the way he tried his hand at writing non-fiction in and out of academia, and 8 years ago finally committed full-time to writing fiction.

For Stephen there is something about this northern Thai city that makes it a perfect place to write. His preferred genres to date have been horror and science fiction. On the one hand, he sets his horror novels in Thailand because Thais have such vivid customs that touch the supernatural. On the other hand, disheartened by the cultural Marxism that dominates social discourse now in the West, he feels drawn to writing science fiction for the rational optimism over possible futures it affords. Approaching SF formerly as pure escapism, he finds in it now a source of hope and forward thinking that can be very inspiring.