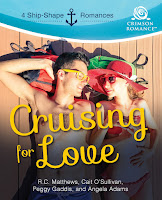 Attorney Madalyn Russell may have dumped her fiancé at the altar, but no way is she rejecting the honeymoon cruise. Unfortunately, she didn’t cancel the newlywed package, and now she’s stuck as a single in a lovebird world. That is, until a devilishly handsome man with a secret, Royce Spencer, offers a deliciously indecent proposal: He’ll pose as her husband in exchange for companionship during the cruise. She can’t deny their attraction, but will their little white lies make too many waves when Royce’s past finally catches up with him?

When a relationship gone bad sinks sous-chef Pippa Renshaw’s plans, she swaps her job in a prestigious London restaurant to become the head chef on a cruise ship sailing around New Zealand. It’s a great escape plan until a mix-up means she has to share a suite with her new boss, the delectable Jonathon Eagleton, who is no happier about the circumstances. These two can handle the simmer… but when the heat turns up, is it a recipe for true love?

Shortly after the FBI brings in Laura Roberts for questioning regarding activities at the warehouse where she keeps the books, a gang of thugs snatch her off the street. Chase Donovan boarded his boat intending to spend a few peaceful days getting his head together, but instead he finds trouble when he interrupts two men assaulting a woman in his cabin. What’s more, they claim his father told them to do it. Chase doesn’t want to believe his father could hurt anyone. Laura doesn’t understand why she’s a target. Can they put their mutual attraction and time on his yacht to work to discover the truth before someone dies?

Nurse Claire Frazier was devoted to her fiancé, until he threw that love back in her face. Disillusioned and burning with shame, she books passage on a world cruise, along with an intriguing collection of fellow passengers: an attractive second officer, a detective, and a confidence artist. Is love waiting once again at the next port of call?

Read an excerpt from Magic Moment by Angela Adams:

Laura is having lunch at the local diner when two FBI agents approach her and insist she come down to headquarters and answer a few questions. A bewildered Laura finds Chase Donovan, her boss’s son, coming to her aid.

“Laura works for my father,” Chase said. “If I don’t see some identification, she’s not going anywhere with you.” To prove his point, his hand moved downward and his fingers wrapped gently around her forearm.

Chase also worked for his father, although what his role was within the business was generally debatable among the clientele. This was so embarrassing. In the three years Laura had worked as Dick Donovan’s bookkeeper, her conversations with his son had been work-related or cordial exchanges about the weather. If there was any chance of the floor opening up and swallowing her, she considered now the perfect time.

She turned to Chase. “Thank you for your concern. I’ve seen their identification.” She didn’t mention the hasty badge flip. “They have me confused with someone else. I’ll take care of the error, and get back to the office as soon as I can.”

“Let me go with you.” Chase tossed the men a wary glance. He still held her arm. “You should have an attorney.”

Laura winced, truly mortified. There was no need for an attorney or involving Chase Donovan in calling one. She had done nothing illegal. “I’m fine.”

About the Author: Angela Adams writes and reviews contemporary romances. Her work has appeared in Romance at Heart, Oysters and Chocolate, and The Long and Short Reviews. Her short story, “Burgers and Hot Chocolate” appeared in the anthology, Winter Wonders.

Buy the book at Amazon, Barnes and Noble, or Crimson Romance.