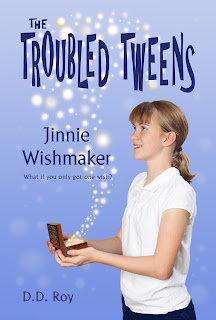 Eleven-year-old Jinnie has a dilemma--she can grant wishes, but she can't control the results.

The school counselor tells Jinnie to join the Troubled Tweens, a group of kids with similar power problems. Maddy’s touch makes anyone explode in anger. Grace can make people like her--as long as they don’t let go of her arm.

But their loose use of magic attracts the attention of the Loki, a group of magic thieves and pranksters. They want to steal an open-ended wish from Jinnie, and it will take all the limited and messed-up magic she and her friends possess to make sure their powers don’t fall into the Loki’s greedy hands.

Jinnie Wishmaker is the first book of the Troubled Tweens series for 9-12 year olds.

A thorougly enjoyable novel for a young girl (I know, because I am one!).

Jinnie and Bryan (her brilliant brother) go to live with their Aunt and Uncle and have no clue what life will be like.  Then Jinnie discovers she can grant a person's one true wish, but doesn't have any control over her power.

She joins a group called The Troubled Tweens and tries to learn how to use her power to help fight evil.  Her brother helps as much as he can to keep the group secret and to keep the evil forces at bay.  But one question remains:  where are Jinnie and Bryan's parents?

I really enjoyed reading about how the different people in Jinnie's school learn to work together to defend Jinnie from the evil forces trying to steal her power.  It really showed how friendship and teamwork should be.  The unique group of people who made up The Troubled Tweens was interesting and I can't wait to see what happens to them next.

I especially liked that Jinnie helped animals in need. She had a caring heart for those who were being hurt.

Really, there wasn't much I didn't like about this book.  It was a little slow for me, without the frantic conflict so many books have, and I would have liked to have seen more fighting against evil or more time searching for their lost parents.  Still, it didn't keep me from enjoying this book.

I'd recommend this for younger girls who like to read, especially to those who love animals!