Meant to Be by Karen Stivali - Virtual tour and giveaway

Today we're welcoming author Karen Stivali to the blog on her tour with Goddess Fish Promotions for her Women's Fiction novel, "Meant to Be".

Karen will be awarding the winner's choice of a backlist ebook to one commenter at every stop, and a $20 Amazon GC will be awarded to one randomly drawn commenter at the end of the tour, so comment today AND follow her tour (if you click on the banner over there on the left, it'll take you to a list of her tour stops)! The more you read and comment, the better your odds of winning. You could be introduced to a great new author AND win prize!

Karen was kind enough to answer all my prying questions, so let's turn the floor over to her!

The simplest answer to that question is that I’m a sucker for a love story. I’ve published in three genres: erotic romance, women’s fiction and contemporary romance, and one thing that’s consistent in all of my stories is that they’re about people falling in love. My favorite thing about writing is getting to recreate the experience of falling for someone. There’s not a lot that’s more enticing than the build-up to a long awaited first kiss and I get to recreate that moment for my characters in every single story. That’s what draws me to these genres. Plus, unlike real life, I get to decide what happens so I can make everything have a happy ending. What could be better than that?

I don’t do a ton of research for my stories. I pick locations where I’ve lived or professions I’m familiar with, so I don’t have to do extensive research on things like that. My stories tend to focus on relationships. A friend told me I’ve been studying human nature since he met me, decades ago, so he thinks that counts as a tremendous amount of research. I just think of that as me being fascinated by people and the way they relate to each other.

I have taken a few fun field trips to make sure I’m remembering details of certain towns correctly. This summer took me to a chocolate shop on the Massachusetts border and to the campus of Dartmouth for some fact checking for my next release.

I learned patience. I learned it from them because of how long they have to wait until they can allow themselves to admit their feelings and get together. The process of getting this book published also taught me about patience and I persevered for this hero and heroine. I was determined to get their story out to the world. I’m very grateful to them for teaching me this. Thanks to them I made it through the lengthy and often soul-crushing experience of waiting for answers from publishers and agents and, instead of giving up, I wrote more books. All of which I’m happy to say are now under contract. Except for the one I just started writing…. My writing critique partner Karen Booth would say that’s an example of me being a tease. I’d say that’s not true, I’m not a tease because I eventually put out. I hope to have this new story ready to put out in a few months.

I have several quirks and superstitions, and not just in regard to writing. There is one quirky superstition that stands out from the rest. When I was submitting Meant To Be to agents and publishers I always sent out query letters in batches or multiples of three. I also started querying on 9/3. I wound up getting the offer from Turquoise Morning Press on 6/30 (9 months and 27 days later). It’s funny because the number 3 has never been a lucky number for me before, but it is for other family members and it played heavily into the storyline of Meant To Be. I had no idea at the time that it would, in retrospect, wind up being so significant. I guess that means now it’s a lucky number for me too.

I’m not sure I fit the standard definition of either. I can’t write unless I have the story (from beginning to end) planned out in my head. The best way to describe it is that I see it play out in my mind like a movie, then I write down what I’ve seen, almost like I’m transcribing it. That sounds like I’m a plotter, but I don’t write time lines or plan out chapters. There’s no outline. No notes. Never a clue as to where chapters will end or how long individual scenes will be. Once I “see it” I just write it, and at that point I’m pantsing, because I just write what’s happening in my mind as I watch it play out. I think we need a new word for my writing style. Plantser? Potter? Voyeur? I’ll keep thinking . Feel free to leave suggestions in the comments!

My 20lb, super-fuzzy, long-haired Maine Coon cat who is affectionately known on Twitter as #BadKitteh. He’s pretty much always underfoot, loves to have his tummy rubbed and is obsessed with fruit. That’s the main reason he sits with me---my desk is in the kitchen and he’s perpetually in hope that if he’s near me I’ll share a strawberry with him or let him have a piece of melon or a lick of a cherry. He’s a bit weird.

But I’m okay with that.

The sequel to Meant To Be is being released on November 26, 2012, so I’m very much looking forward to that. Holding On picks up one year after Meant To Be ends, but it can be read as a stand alone book as well. I’m also very excited to announce that I just signed a contract on a new contemporary romance novel with Samhain Publishing. That novel, a friends-to-lovers/second-chance-with-an-old-crush beach story is due to release late spring 2013.

In addition to these two full length works I have short stories appearing in two upcoming anthologies. One is a wedding anthology from Turquoise Morning press (due out in spring/summer 2013 and featuring characters from Meant To Be). The other is Felt Tips---the first ever Office Supply Themed Erotica Anthology, which is edited by Tiffany Reisz (MIRA author of The Siren). It’s due out 12/12/12 and all proceeds will go toward buying school supplies for underprivileged children and supplying suitable business attire for adults who are seeking to re-enter the workforce.

Sometimes you’re already committed to the wrong person when fate finally brings you the right one.

When NYU professor Daniel Gardner’s career-obsessed wife convinces him to move to the suburbs, he hopes it’s a first step toward starting the family he longs to have. Instead of domestic bliss he finds his neighbor, Marienne Valeti. She loves her freelance design job, but must contend with a growing sense of isolation created by her husband’s indifference. A penchant for good books, bad movies, and Marienne’s to-die-for brownies sparks a powerful bond between them. Passion simmers, but they resist its lure, surrendering only in the seclusion of their minds. Their friendship helps them weather every hardship, from divorce to widowhood, leaving them both secretly wondering if it can survive a first kiss.

Daniel’s hand froze on the page the moment he saw it. It looked more like a candid photo than a drawing. “That’s amazing,” he said, unable to take his eyes off it. “I can’t believe you drew this from memory.”

“I have a good memory.” She smiled.

“I’m speechless. Well, not literally speechless, as I’m babbling, but I don’t know what to say.” He turned to glance at Marienne and saw that she was blushing. “I had no idea I was this good looking.” He added, and she laughed, which was precisely what he wanted. He didn’t want her to be uncomfortable, at all, ever.

“Clearly,” he said. “And thank you, I’ve never looked better. Though I do look awfully sad. Is that how you see me?”

“I was going for introspective, not so much sad, but the night I drew that, yes, you did seem sad.”

“What night was that?” he asked.

“The night you came for dinner while I was baking all the Christmas cookies, the night you told me about your mom.”

“Then I’d say you captured that mood perfectly.” He looked back at the drawing, still amazed by how much it looked like him, only somehow better.

“But that’s not how I always see you. Turn the page.”

He laughed as the next drawing was also of him, this time with his head thrown back, eyes twinkling, mouth wide with laughter, right hand raised and woven through his hair. Once again he felt like he was looking at a photograph rather that a drawing. He looked at his own hand then at the drawing, she had captured it flawlessly. The expression, the pose, it was all unmistakably him. How did she do that without me posing for her?

“You’re amazing.” He was in awe, not only of her ability to put his image on paper with such beauty, but to see him with such clarity. 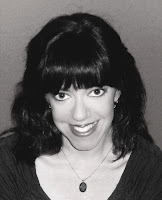 Karen Stivali is a prolific writer, compulsive baker and chocoholic with a penchant for books, movies and fictional British men. When she’s not writing, she can be found cooking extravagant meals and serving them to family and friends. Prior to deciding to write full time Karen worked as a hand drawn animator, a clinical therapist, and held various food-related jobs ranging from waitress to specialty cake maker. Planning elaborate parties and fundraisers takes up what’s left of her time and sanity.

Karen has always been fascinated by the way people relate to one another so she favors books and movies that feature richly detailed characters and their relationships. In her own writing she likes to explore the dynamics between characters and has a tendency to craft romantic love stories filled with sarcasm and sexy details.

For more information about my current and upcoming projects please visit my website: http://karenstivali.com