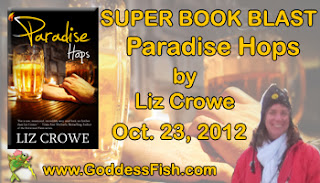 Liz will be awarding a "swag pack" from her brewery, the Wolverine State Brewing Co including 2 tee shirts, a pint glass, a hat and a certificate for a free growler fill plus $15 Amazon GC to a randomly drawn commenter during the tour, so comment today AND follow her tour (if you click on the banner over there on the left, it'll take you to a list of her tour stops)! The more you read and comment, the better your odds of winning. You could be introduced to a great new author AND win a GC!

A brutal attack left Lori Brockton convinced she was damaged goods. By the time she emerges from hiding two years later, ready to run her family's famous brewery, she's determined to be independent--never rely on anyone ever again. Nearly a year of working in every corner of Brockton Brewing Company, from warehouse to pub, front office to kitchen, teaches her all she needs to know about the business.

Then, she comes face-to-face with masculine perfection in a suit and her world is rocked in more ways than one. Garret Hunter is the new Brockton business manager who takes one look at the beautiful, sad young woman and his entire existence coalesces around winning her heart. But standing between Garrett and what he believes is his true love, is a six-feet six-inch blond-haired bad boy brewer.

Eli Buchannan is a craft beer rock star, recently hired by Brockton to drag the company into the 21st century. He brings innovation and attitude plus a prima donna ladies man reputation. But he's sworn off anything resembling commitment, personal or professional, after getting burned at his last job on both fronts.

Garret Hunter is “The Perfect Man” -- handsome, successful, stable, eager to settle down. Eli Buchannan... is not. Compelling, smoking hot, creative and elusive, he represents everything Lori Brockton should avoid. But just as she makes a difficult choice, a drastic life-changing shift occurs, and nothing is ever the same again.


Lori Brockton walked past her father’s secretary’s empty desk intent on the report she had from the restaurant manager. “Dad, I’m worried about Frank’s side of this." Tucking a lock of unruly hair behind her ear and pushing her glasses up her nose, she opened the large door, already talking to him. "Honestly, I don’t think he considered…Oh…,” she stopped dead in her tracks. The heavy horn rims slid down her face.

Her father smiled. “Lori, allow me to introduce Garrett Hunter. He’s the business manager I told you about.” Ron Brockton rose from his massive desk and joined her, putting a protective arm around her waist. The man-vision that had her choking on her own spit rose from his chair and stuck out a hand. She looked at it, then started when her dad jabbed her in the ribs.

“Uh, hi.” She wiped a palm on her itchy wool skirt. The vision’s eyes never once faltered from hers. If anything they started to twinkle. Jesus. Eyes actually did that? She surpressed a groan and let him take her hand. The warmth from their touch spread instantly to her scalp then down her spine.

“Pleased to meet you. Your father has been telling me about your experiment here.” Lori stared at their still-joined hands, wondering how long they could stay connected and still be polite. She never wanted him to let go, and she hadn’t felt that way about a member of the opposite sex in a damn long time. His voice was low, gravelly, with a slight southern lilt. “I love the fact that you’re immersing yourself in every aspect of the business, from back of the house food prep to accounting. That’s a great way to learn it all.” He gave her palm one last squeeze, then dropped it, leaving her bereft.

She gulped. “Oh, um, yeah.” Wow. Way to impress Mr. Perfect, Lori. Nicely done. The incredible male specimen smiled at her and Lori’s heart stuttered, really and truly, just like in the romance novels she’d once loved but had abandoned.

“So Garrett, why don’t I let Lori show you around?”

She gaped at her father’s words. She already sensed sweat gathering under her pits. She must reek of desperate, used female. “No, Dad, I…”

“That would be great Ron, thanks.” Lori swallowed hard and stared at Garrett Hunter long and hard. He commanded the room as if he were six foot ten instead of his perfectly average six foot two. Thick chestnut brown hair was cut close, clean, like the smooth line of his square jaw. The words “noble Roman profile” sprung to mind as she pondered his nose and chin and those incredible deep emerald eyes. The expensive-looking gray suit fit him perfectly.

Her father cleared his throat. She jumped, dropped the spread sheet she’d been clutching, bent down to grab it as her elbow hit a coffee cup on the nearby table. Warm, black liquid dripped onto the hardwood floor. “Christ,” she muttered. “Sorry, I’m a klutz.” She glared at both men.

Her father frowned then his face softened. “It’s okay honey. I’ll get this. You show Garrett around.”

“But…” She gave protest one last shot. Garrett kept quiet. Awkward. “Fine. But I only have about twenty minutes.”

“Take your time Lori,” her father waved a hand. “I’ll tell Frank he can wait.” 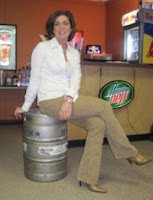 When she isn't sweating inventory and sales figures for the brewery, she can be found writing, editing or sweating promotional efforts for her latest publications.

Her groundbreaking romance subgenre, “Romance for Real Life,” has gained thousands of fans and followers who are interested less in the “HEA” and more in the “WHA” (“What Happens After?”)

Her beer blog a2beerwench.com is nationally recognized for its insider yet outsider views on the craft beer industry. Her books are set in the not-so-common worlds of breweries, on the soccer pitch and in high-powered real estate offices. Don’t ask her for anything “like” a Budweiser or risk painful injury.