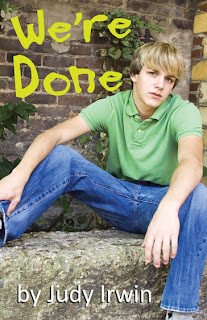 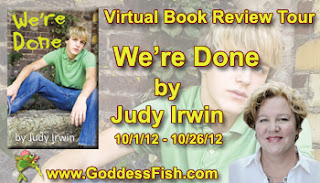 This review is done in conjunction with the author's virtual tour with Goddess Fish Promotions. The author will be awarding a $25 Amazon GC to a randomly drawn commenter during the tour, so comment today AND follow the tour (if you click on the tour banner above, it'll take you to a list of his tour stops) -- the more you read and comment, the better your odds of winning. You could be introduced to a great new author AND win a fun prize!

What if it turns out that YOU'RE the bully - and you didn't know it?

Up until now, life has been good for 13-year-old Luke. He's good at sports, attractive, and he's a big wheel at Heyworth Academy, his private school. He likes to tease, and poke fun at the other kids, but that's just because he likes having fun. But things start to fall apart, six weeks into eighth grade, when Luke commits an act of 'goofing around' that ends up costing him his best friend and his beloved private school.

After he's expelled, Luke transfers to his local school, Carlyle. Now, he's on the outside looking in. His looks, and background (not to mention his Heyworth hoodie), make him stand out, and the tough guys zero in on him right away.

The upside-down world that Luke finds himself in at Carlyle gives him a whole new way of looking at things. Can he recover from losing his school, and his best friend, and find new friends and a way to fit in at Carlyle?

We're Done is a timely book considering the tragic news stories I see, time and again, of kids killing themselves over bullying.

This book takes a different tack, though, and casts the bully as our hero.  It was a bit difficult for me to like Luke at first, and that's a brave thing for an author to do:  give us a protagonist we don't care for.

Luke isn't mean on purpose, he just doesn't realize what he's doing is really hurting people.  He's got it all: he's popular, cute, smart, captain of the soccer team at a ritzy private school. What he needs is a kick from reality right in his rear.  And he gets it.

His "goofing off" gets him expelled from school.  Worse, this last incident involved a family member of his best friend, now ex-best friend.  He loses everything: school, friends, status.  More, his parents are pretty well unavailable.  His mother spends most of her life sleeping, and his father travels for work.  His sister is a worse bully than he is, and the little we see of her is just horrible.

He's plunged into the foreign world of public school and it's a big awakening.  Suddenly he's not the cool kid anymore.  He's the one made fun of.  He doesn't fit in anywhere, and he can't even play soccer.  The one person he knows is someone he hurt the summer before, and she wants nothing to do with him.

Luke doesn't undergo an immediate transformation, for which I am grateful.  It takes awhile, and a few virtual slaps to the head, for him to see what he'd done in the past was hurtful. He observes some kids doing the same stuff he used to do to another kid, and it all slowly starts to come clear.  The author paints a very realistic picture of school and kids and it's both a little sad and encouraging.

I enjoyed this book.  It was a quick, enlightening read with a snappy plot and clean, descriptive writing.  My only complaint is that not all the ends were tied up.  I really wanted to see Luke take a stand with his sister and her behavior.  I'd have like to see at least a little of the problems with his parents cleared up (Luke does confront his dad, though nothing much really changes).  Even so, the book does have a satisfying ending with Luke and his growth.  And it left me wondering just what came next.  I was attached to this kid I hadn't liked at first, and I want to know he succeeds.

Judy Irwin writes books about kids dealing with everyday stuff, like parents and divorce, friendships and bullies, and figuring out how to handle different situations and circumstances. So far, she's written two books: We're Done, and What Did You Say? We're Done is about 13-year-old Luke and how he figures out what went wrong when he's kicked out of school for a bullying incident. In What Did You Say?, 12-year-old Tash tries to figure out what life will be like following her parents' divorce. In this book, which takes place at a trailer park up north, Tash first meets Luke, Jon and Polly.

Judy lives in Toronto, Canada, with a dog, a cat, and two hamsters, plus her husband and two children, ages 10 and 13. She studied English Literature at the University of Toronto. She always wanted to be a writer. She wrote her first book in fourth grade - it was about a boy called Japan, who lived in Japan. In addition to writing books, Judy is a freelance business writer.