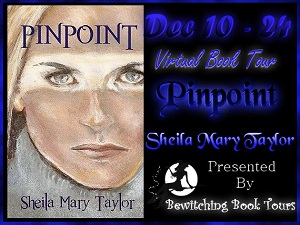 Today we're welcoming author Sheila Mary Taylor to the blog on her tour with Bewitching Book Tours for her Psychological Thriller, "Pinpoint".

The author will be awarding 5 print copies and 5 eBook copies of her book via the Rafflecopter at the bottom of this post -- and it's an international drawing!

Ms. Taylor was kind enough to answer all my prying questions. Thanks!

Thank you so much for having me on your blog.

Well now, the truth is I don’t ever plan to write in any particular genre. Pinpoint is a Psychological Thriller, and you could also tag it: Legal-Crime. But this isn’t because I set out to write in this genre. It’s always a complete accident because what happens is that I’m drawn not to a genre, but to a particular character whose predicament presents a scenario which is so challenging that I just have to find out what happens to her or him, and why. A character will begin to haunt me, to inhabit my dreams, to frighten me because of the predicament they are in. And it’s this predicament that decides what the “genre” will be, if indeed it belongs in any genre.

I know that more and more in this digital age, “genre” seems to be an all important element in defining how a book is presented, how it is marketed and in creating a niche for an author whereby she can make a brand name for herself. But somehow my writing at the moment is too spontaneous for me to be able to do this. Possibly one day I will find that niche.

For Pinpoint I had to do an enormous amount of research and I enjoyed every minute of it. I believe in trying to experience personally as much of what happens in the novel as I possibly can. Like going to the places I depict in the story; like actually taking part in my character’s activities. For example, I attended many murder trials in the Manchester Crown Court. I visited police stations and was even smuggled in to an interview room at Strangeways Prison when a solicitor was interviewing a murder suspect. I also enrolled in a self-protection class. I masqueraded as a social worker and knocked on people’s doors. I drove to outlandish areas I didn’t know, sometimes scared out of my wits. I walked through them and breathed in their air. Spoke to people I didn’t normally meet. And for those things I couldn’t do myself, I went directly to the highest authority available to give me first hand information, making sure I had my tape recorder switched on. People are so willing to help you when you say you are writing a novel!

Name one thing you learned from your heroine?

In exploring the predicament of Julia, my main character in Pinpoint, I learned that it isn’t always possible to do what in normal circumstances you know to be the right and logical thing to do. That circumstances can drastically affect or even twist your judgement, especially when you are on a cliff edge of deciding which precarious path to take. And this is the very crux of Julia’s predicament: on the one hand she has to consider the potential danger to her daughter that Sam Smith, her escaped murder poses, although if he is who she thinks he might be, she knows he couldn’t possibly harm her daughter; and on the other she is driven by her inborn love for her long-lost twin brother, who, even though her amnesia prevents her from remembering his name and face, she nevertheless knows that he was the one and only person up to the age of ten, who loved her and protected her.

Getting up at 4:30 in the morning has never seemed odd to me, and yet my friends think I’m quite mad. But what better time of the day to start writing, when the brain is rested, fresh and ready to send out tendrils into the unknown to pluck new and wonderful ideas for your novel.

Oh, definitely pantser. Plotting doesn’t work for me. Sometimes I wish it did as it might even make my writing journey a lot simpler. But it’s almost as though my muse is saying to me, once I have my desperate heroine embroiled in her predicament – No! don’t even try to think what will happen next! That would spoil it for you. How could you possibly know all that stuff when your heroine doesn’t even know it. And if she knew, then there’d be no surprise – not for you and not for the heroine and not for the reader. Much better just to let it unravel, like it does in real life – an unpredictable surprise around every corner. Okay, okay! I tell my muse. I get the message …

I am trying really hard to cram as much into my life as I possibly can. When I turned 83 this year I had to resist doing a mental calculation which, let’s face it, might have made me pretty despondent. Having come to writing late in my life, and also holding down a full-time job as an editor for a publishing company, something I always wanted to do and which has belatedly changed my life, I still cannot resist making to-do lists. One of them is the myriad novels I intend to write. They are stacked up in an ever upward spiralling pile. I can’t tell you what genre they are in because as you already know that is only determined once my main character begins to embark on her journey of escape/fulfilment/discovery/retribution – whatever. So one of these days I might surprise you with something quite different but something I do hope you’ll read, even if it isn’t in your favourite genre.

I’m really excited about my new novel. It just needs a final edit and then it’s ready for my publisher. Dance to a Tangled Web also started out with one character in a predicament but has ended up with three main characters whose lives have become entwined, each with a seemingly unsolvable dilemma which nevertheless inescapably links them. There is even a very slightly paranormal touch to this one. I suppose you might call it a romantic drama. A physiotherapist working for a ballet company is married to an orthopaedic surgeon and they both desperately want and need a second child. IVF treatment fails with unexpected and catastrophic results, when the life of the third ethereal character is threatened. And though tragic from one point of view the ending is surprisingly gratifying. Nobody was more surprised at the outcome than I was.

Apropos my own situation, I wonder whether your readers like to know what kind of novel their favourite author is going to come up with next? Would they like to read more of the same? Or would they like to be surprised, not only by the content of the book but by the – to use that word that isn’t yet part of my vocabulary – the genre? 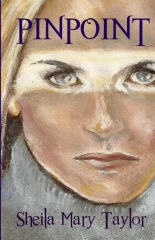 A lawyer, a murderer and a policeman - caught in a tangled web of love, loss, terror and intrigue.

When lawyer Julia Grant interviews Sam Smith who has been charged with an especially vicious murder, she feels a strange connection to him, as if she has met him before, as if he holds the key to something she has forgotten among the unbearable memories from her past she has determinedly blotted out.

He feels a connection too. "Julia, you are the only one who can help me," he pleads.

Is it the same connection? Does he know something she cannot recall?

When he is duly convicted despite her best efforts, he suddenly turns on her in the courtroom and threatens that one day he will make sure to wreak his revenge on her.

But why? What has she ever done to him?

Sheila Mary Taylor was born in Cape Town beneath the towering slopes of Table Mountain. Her Scottish parents, both serious academics and writers, despaired of her, as the things that turned her on as a youngster seemed far removed from their serious world of academia.

And no wonder. Cape Town was a distracting paradise to grow up in: mountain climbing, surfing in the glistening waters of the Indian Ocean, roller-skating, riding, hunting – and parties galore. She did it all, although the thing she loved most was dancing, and until she was twenty-three when she met Colin, her husband-to-be, on a visit to the UK, she wanted to make ballet her career. But having been surrounded by wall-to-wall books from an early age, and listening to music almost non-stop as her father played his hi-fi classical records so loud it was like having an orchestra in the house, was bound to have a belated influence on her. Yet it was only much later that these two strong influences – combined with the clock-ticking heartbreak of her youngest son Andrew being diagnosed with teenage cancer – would change her life and kick-start her writing career.

Her plethora of unusual activities: jockey in amateur ladies’ races, exhibition roller skating in night-clubs, a spell of acting and directing, secretary to a diplomat, creator and editor of a dramatic society magazine, dancing in the Royal Albert Hall, and above all, living in exciting exotic places around the world with Colin, her mining engineer husband of almost sixty incredible years – have all enriched and inspired her writing.

a Rafflecopter giveaway
Posted by MJ Thomas at 12:01 AM