The Billionaire Playboy by Christina Tetreault - Virtual Tour and Giveaway

Today we're welcoming author Christina Tetrault to the blog on her tour with Goddess Fish Promotions for her contemporary romance, "The Billionaire Playboy".

Christina will be awarding a $10 Amazon gift card to a randomly drawn commenter during the tour, so comment today AND follow her tour (if you click on the banner over there on the top, it'll take you to a list of his tour stops)! The more you read and comment, the better your odds of winning. You could be introduced to a great new author AND win prize!

Christina was kind enough to answer all my prying questions. Thanks!

I currently write in the contemporary romance genre even though it is not the only type of romance I enjoy reading. Someday I hope to expand and try writing a historical romance as well as a paranormal romance. Right now though I stick to contemporary romance for a number of reasons. First and foremost, I love the stories in that genre. I like reading about everyday people that I could possibly meet on the street and then making them fall in love. I also enjoy writing in this genre because there is a limited amount of research required . As a mom to 3 small children, a Daisy Girl Scout Leader and a MOMS Club president I just do not have the time to do a lot of research and write a great book.

Since I write contemporary romance, there is not a lot of research required. True I sometimes need to research a location or a job description but I do not need to research the type of clothing a character would wear or how they would travel from place to place.

One thing that I learned from my heroine? Now that is a thought provoking question. I think I learned to never give up. No matter what keep trying. My first book took me almost 5 years to write. More than once I stopped writing it, but the main character in that first book demanded that I finish her story.

I think it is a little odd, but I have to write all my stories out long hand first. Once I complete a rough draft, I type it in then print it out and do revisions and edits on a paper copy. The whole thing is very time consuming but I can not seem to break the habit.

I don't really consider myself either. I find that I am somewhere in the middle. I have a general idea of what I want to happen when I start, but not enough to create a detailed outline.

If I look to my right, I see my Jack Russell Terrier, Niles. He is one of my dogs that I adopted from a shelter 10 years ago. He is like my shadow.

Currently, I am working on the 3rd book in The Sherbrookes of Newport Series. It should be out sometime in 2013.

Captain Charlotte “Charlie” O'Brien, a doctor in the United States Navy, returns to her home in North Salem, Massachusetts to visit her family and make an important decision about her future. Mother Nature has other plans when a hurricane strikes, flooding the town and throwing Jake Sherbrooke in Charlie's path. Initially she believes Jake is nothing more than a rich playboy, but quickly, she learns that he is so much more.

The media calls him Prince Charming.

Jake Sherbrooke has never been one to follow the path laid out by his parents. That is why hestarted the Falmouth Foundation, a non-profit disaster relief organization rather than enter politics. When he learns of the destruction in North Salem, he immediately travels there to offer aid and meets Charlie O'Brien. Charlie is unlike any woman he has ever meet and he can not help but be drawn to her.

Soon neither can ignore the incredible chemistry between them. But will his reputation as a billionaire playboy damage their budding romance?


Turning on her heel, she noticed that Jake had pulled his white dress shirt out of his pants. Before he could begin to unbutton it, she moved closer to him and brushed his fingers away from the tiny buttons.

“Let me,” she whispered against his lips. She heard a deep intake of breath and couldn't contain her smile.

Charlie took her time undoing each tiny pearl button. Between each one she placed a gentle kiss on his lips or caressed his arm or back. The change in his breathing let her know her actions excited him. As she trailed a hand down his chest she wondered just how long she could tease him before he turned the tables. Jake didn't give her the opportunity to do anything else before tearing his arms out of the shirt as soon as she slipped the final button from its hole. The white t-shirt he wore underneath immediately followed, both of them quickly landing in a pile on the floor.

Jake with clothes on was gorgeous, but half-naked he was simply a sight to behold. Unable to stop herself, she ran a hand over his powerful chest then down his sculptured abs. She felt his abs contract and a new feeling of empowerment flowed through her. Without pausing she let her hand travel down further toward his belt buckle. With deliberate movements she undid the buckle making sure her hand brushed over his erection more than once.

After her third pass, he gripped her wrists. “I suggest you let me finish.” Jake didn't wait for a reply. Once he undid his tux pants and added them to the growing pile on the floor he took a step back toward her. “My turn.”

He began by pulling the pins from her hair. Once the twist she'd fashioned was gone, he slid his hands over her bare shoulders and back to the zipper of her dress. Inch by agonizing inch Charlie felt the zipper move downward until the only thing holding the dress up was the fact that her body was pressed tightly against Jake.

“I think it's time we get rid of this.” As Jake whispered in her ear he took a step back and the dress began to fall away from her body.

Determined to remain calm, she fought the unexpected urge to grab the dress and yank it back into place, and when the dress hit the floor around her ankles she deliberately stepped out of it. Her heart pounded an erratic rhythm as she stood there in nothing but her white lace thong, strapless bra and heels. Despite her discomfort she never once looked away from Jake's face.

The raw desire she saw on his face as his gaze slowly and seductively slid down her body extinguished any fears and replaced them with a burning desire that set every inch of her body on fire. Her entire body craved his touch and she wanted nothing more than to fall into the bed behind them, wrap her body around his and satisfy her craving. With every intention of doing just that Charlie took a step toward him, but Jake reached for her first and held her in place. Slowly his eyes traveled from her face down to her feet and then back again. As his gaze moved over her it left a trail of pulsing excitement behind on her skin.

“You're sexier then I imagined.”

Whether because of his compliment or the way his eyes devoured her, Charlie's confidence grew stronger. Before she could rethink her decision, she undid the tiny hooks at the back of her bra and tossed it on the floor. At the sound of Jake's sharp intake of breath she smiled. Before she could do or say anything else he closed the gap between them and scooped her off her feet. 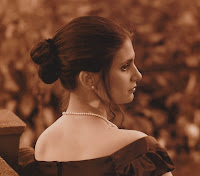 I wrote my first story with characters similar to those in the Sweet Valley Twins books at the age of 10 on my grandmother's manual typewriter. As I got older my stories and characters became more mature. During my freshman year at UMass Dartmouth, I read my first romance novel and fell in love with the genre. I have been writing contemporary romance ever since.

Today I live with my husband, three beautiful daughters and two dogs in Massachusetts. Whenever I have a free moment you'll find me either reading a romance novel or working on my most current story.