A Kiss to Die for by Gail Barrett -- Spotlight and Giveaway 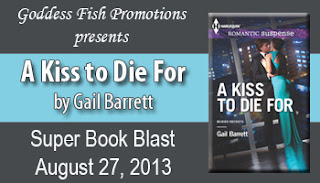 This post is part of a virtual book tour organized by Goddess Fish Promotions. Gail will be awarding a $25 Amazon gift certificate and either a signed print copy (US ONLY) or an electronic copy of Fatal Exposure (Buried Secrets book one) to one randomly drawn commenter during this tour and her other Super Book Blast on August 21st. Click on the tour banner to see the other stops on the tour.

Homeless Army veteran Sullivan Turner is nobody’s hero. His failure to save his fallen comrades proved that. So when a gutsy social worker gets caught in a drug gang’s crosshairs, he knows he’s the last man who can safeguard her and the pregnant teenagers she’s trying to protect.

Former debutant Haley Barnes learned the hard way how to survive. After witnessing a cold-blooded murder, the terrified teenaged runaway changed her identity and hid to save her life. But when the killer tracks her down and attacks the girls in the homeless shelter she now runs, Haley knows the time has come to stand and fight. But to bring down the powerful killer she must confront her high-society family’s darkest secrets -- and convince wounded warrior Sully Turner he’s the hero she believes.

“Are you all right?” the man asked.

His low, gravelly voice drew Haley’s attention, and she turned her head. She met his grim, whiskey-hued eyes, and her belly made a little clutch, the reaction catching her unprepared. Startled, she took in his dark, furrowed brows, the stark lines of his craggy face. He had straight, collar-length hair dampened with sweat, a slightly off-center nose that hinted at less than a choirboy past. A few days’ worth of razor stubble -- several shades darker than his hair -- covered his throat and jaw.

Her heart made another swerve. He wasn’t exactly handsome. But man, oh man, was he attractive. Arresting. Thoroughly masculine in a decidedly carnal way. He looked like an old-fashioned gunslinger, like the loner who rode into town, risking his life to battle the bad guys and save the day. A solitary man in need of comfort who left behind a trail of broken hearts as he rode away.

This was the homeless man, she realized with a start. But he was nothing like she’d expected. He was younger -- in his mid-thirties at most -- and far more virile. He wore work boots and tattered jeans, a long sleeved T-shirt he’d pushed up to his elbows, exposing the tendons roping his arms. His hands were big and lean. He cradled the gun with lethal ease.

He was the most beautiful sight she’d ever seen.

Gail Barrett is the award-winning author of thirteen romantic suspense novels. A former RITA® and Daphne finalist, Gail has received the Book Buyer’s Best Award, the Holt Medallion, the Booksellers Best, The National Readers’ Choice Award, and numerous other awards. She lives with her husband in Western Maryland. For more information, visit her website: www.GailBarrett.com.

Buy the book at Amazon or BN.com.
Posted by MJ Thomas at 3:30 AM