The Water Sign by C.S. Samulski --Book Review and Giveaway 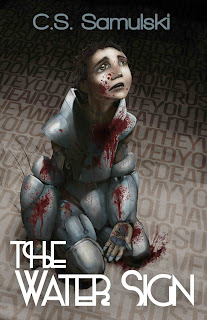 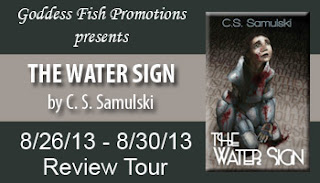 This review is in conjunction with a book tour organized by Goddess Fish Promotions. C.S. will be awarding an ebook (international) of science fiction novel REVISION 7 by Booktrope author Terry Persun at each stop to a randomly drawn commenter, and a grand prize of a $10 Amazon or B&N gift card will be awarded to a randomly drawn commenter during the tour. Click on the tour banner to see the other stops on the tour.

The teachers taught us how to kill and made us dream for death. It is the only place the Struggle leads. And even it was a lie.

I am too old to be a child. Still too young to be a soldier. But I am trapped as both.

My name is Ayax, though some call me the Water Sign – and this is the story of how I died so that the world might live.

In a future torn apart by catastrophic climate change, biological warfare, and geopolitical upheaval, corporations have taken over the role of nation states. Protected by the re-purposed United Nations and their dreaded Peacekeepers, these corporations and their mercenary armies wage endless wars across all that remains of civilization. And hidden in this chaos, someone or something is stealing children and programming them to fight. The warriors that emerge at age fourteen are vicious and unlike any the world has ever seen.

Exploited by his teachers, and pursued by others who would use him for their own ends, Ayax must navigate our dystopian future filled with treachery, unlikely allies and forbidden AI technology. Is he the Water Sign as the Kafkari believe he is, or merely another experimental weapon?

The Water Sign is an intriguing book--a look at a world that might be. A world that takes everything we know and twists it into something unrecognizable. I found the references a bit confusing--and the world is not a world I would want to live in.

The best part of the story to me was the relationships between the characters--and I'm excited to find that this is only the first book of a series. It will be interesting to see what happens next.

Bottom line? The book is very very good-- but don't sit down expecting a quick read. This is a book I think I would definitely re-read, because I'm sure there are things I missed on the first reading that I would see on a subsequent reading. There's a lot in it--kudos to the author. Definitely a great debut into the world of science fiction!

Casey studied literature as an undergraduate at Sarah Lawrence College before moving to New York City. There he worked as a freelance journalist covering the arts, local and national news, and public policy while continuing to work on his fiction. In 2009, Casey moved to Los Angeles where he currently resides. He has also studied applied Jungian psychology, the superflat movement in the arts, and quantum physics.

Casey began writing fiction at age seven and claims to have failed to complete more than one hundred novels before finishing his first, which he sold one month later to Booktrope Publishing.