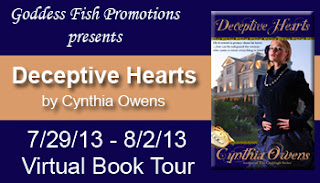 This post is part of a virtual book tour organized by Goddess Fish Promotions. Cynthia will be awarding a Grand Prize of a wooden trinket box with the Trinity Knot applique on the lid - US/Canada only, and a handmade ribbon bookmark to a randomly drawn commenter during the tour. A second prize of a Reader's Choice of The Claddagh Series books (In Sunshine or In Shadow, Coming Home, or Playing For Keeps), and a handmade ribbon bookmark will be awarded to another randomly drawn commenter.

A special welcome to Cynthia Owens, who was brave enough to agree to answer some questions.

Why do you write in your genre? What draws you to it?
I love history and I love Ireland. It just seems natural to me to write about Irish history, and not only in Ireland, but wherever it can be found. Because of the vast displacement caused by An Gorta Mor (the Great Hunger) of the 19th Century, there are people of Irish descent all over the world.
I’ve written two books set in post-Famine Ireland – In Sunshine or in Shadow and Coming Home – and a third set in Baltimore and Philadelphia which features an Irish character, Playing For Keeps. With the Wild Geese Series, I chose to tell stories of some of the people who had fled famished Ireland and sought a better life in America. They didn’t always find it, but some did, and some thrived. It’s a story of hunger and deprivation, courage and conflict, and those themes were irresistible to me.

What research is required?
A lot! For instance, for Deceptive Hearts, I had to research coffin ships—the ships that brought the Irish to America in absolutely horrible conditions. I had to read some first-hand accounts that were both horrifying and heart-breaking. And since this story is set in the New York City of 1865, I also had to find out what the city was like then. I studied the grand mansions of Gramercy Park, as well as the crumbling tenements of the Five Points. And my hero, Shane MacDermott, was a boxer before the war and now gives boxing lessons to underprivileged boys, so I had to learn about boxing and boxing terms.
But all that research was an absolute joy. I’ve oft been told I’m somewhat of a “research junkie,” and I freely admit it; I love research. My bookshelves are overflowing with books on subjects as diverse as old firearms, Irish history and mythology, poetry, and Canadian history. I do research on the Internet, too, but I prefer the feel of “real paper.” Besides, I’ve been known to get a little distracted, and often end up in a completely different place than I’d planned to go!

Name one thing you learned from your hero/heroine.
My heroine, Lydia Daniels, taught me the importance of trust. I’ve never been one to trust easily, and Lydia is a lot like me, though she has more reason than I do not to trust people—especially men. But in learning to trust Shane MacDermott, she was able to open her heart to him, and eventually to love.

Do you have any odd or interesting writing quirks, habits or superstitions?
No real quirks, and no real habits, but I do have pictures from my trip to Ireland on my walls for inspiration. And I keep a Connemara marble worry stone on my desk, just for luck…and maybe to keep me from worrying about “finishing the book!”

Are you a plotter or pantser?
Definitely a pantser! I rarely plot more than a chapter or two ahead – not for me the sticky notes, plotting boards or any of that stuff. I’m not saying it doesn’t work for some people. I know writers who have every little detail of their stories plotted before they write the first word, and more power to them. It just doesn’t work for me.
What does work is character building. I put every one of my characters through a grueling series of interviews about absolutely everything – their favorite foods, what music they listen to, their most cherished childhood memory, and the one thing they feel changed their life, for good or ill, forever. I grill them about their friends – and their enemies. In doing all this, I get a feel for the characters and I’m able to create their backstory and, eventually, the story I’m writing.

Look to your right – what’s sitting there?
Seamus O’Reagan. I found this little stuffed leprechaun at a discount store one February afternoon in 2005, and he’s been my lucky charm ever since.
Shortly after I brought Seamus home, I submitted a manuscript to Highland Press. A few months later, I received “The Call” ~ or in this case, the e-mail ~ offering me a contract for In Sunshine or in Shadow, my first novel.
I’m not sure how much Seamus had to do with my being published, but I’ve come to think of him as my lucky charm. He’s been with me at every interview and book signing I’ve done up to now, and he’ll continue to be at my side for all my future book-related events.
Who would have thought that a 99 cent stuffed leprechaun could become so vital to me? Must be a bit of Irish magic!

Anything new coming up from you? What?
Yes! I’m thrilled to announce that Keeper of the Light, Book II of the Wild Geese Series, will be published by Highland Press! Let me tell you a little bit about Cathal Donnelly’s story…
This handsome, mercurial storyteller has…shall we say…well, let’s call them Fenian leanings, to use an Irish expression. There’s something big coming up in the Fenian community, and you can bet Cathal is eager to be a part of it.
But…something goes wrong, and he finds himself on an island in the middle of the Atlantic Ocean, with no memory of who he is, where he came from, or why he was in a boat that capsized in a wild Atlantic sea storm. The only thing he knows is that he’s desperately attracted to his beautiful rescuer…even though she’s as English as the British soldiers who drove Cathal and his family from Ireland’s green shores during the famine.
I’m really excited about Keeper of the Light because it allowed me to combine some of my favorite things: Irish history, Irish mythology, and a very important, but little-known piece of Canadian history. You might say I’m showing my Canadian pride with this book!

Do you have a question for our readers?
I have. My first book, In Sunshine or in Shadow, was actually planned as a stand-alone book. I never meant to write a sequel, let alone for it to become The Claddagh Series, with at least seven more stories planned! The Wild Geese Series was always planned as a series, but as I write the stories, some of the secondary characters have definite “star qualities” of their own. So I’d like to ask the readers: Do you prefer series books, or stand-alone stories, and why?

…Like the Wild Geese of Old Ireland, five boys grew to manhood despite hunger, war, and the mean streets of New York…

He survived war, and returned to devastation

A hero of the Irish Brigade, Shane MacDermott returned home to New York to find his family decimated and his world shattered.

She risks her life to save the people she loves

Lydia Daniels will risk anything to protect the women she shelters beneath the roof of her elegant Gramercy Park mansion—even if she has to trust the one man who can destroy her.

Shane and Lydia both hide secrets that could destroy them – and put their lives in jeopardy. Can their love overcome their carefully guarded deceptive hearts?

Tag line from front cover: He’d vowed to protect those he loved – but can he protect the woman who came to mean everything to him?

Shane strode through the dark, damp autumn night, memories of the woman he’d seen near Nan Daly’s room still niggling at him. Her story about bringing food to one of the neighbors didn’t ring true.

Hugh had once told him, “If something feels wrong, lad, sure there must be a reason for it. Listen to your instincts.”

Shane’s instincts screamed out that something wasn’t right.

A picture of the woman floated before him. She was the loveliest thing he’d ever seen, with her honey-blonde hair piled carefully atop her head, her mysterious gray eyes shrouded by that little wisp of a veil on the pretty hat she wore. Had he caught a whiff of roses emanating from her delicate peaches-and-cream skin? Her hands, long-fingered, elegant hands, a lady’s hands, had been encased in white lace gloves that would feed a family hereabouts for a month. And her gown… Shane knew nothing about fashion, but that silk and lace confection must have cost someone a pretty penny.

And the figure that gown concealed was enough to send a man’s wits astray.

But an angel of mercy? Shane doubted it. She’d seemed too jumpy, too eager to get away from him. Why? True, he’d been wearing his uniform, but a woman like that had to be wealthy and well-connected. Sure, she’d have nothing to fear from the law.

He shook his head, dismissing the woman from his mind, and turned to race up the steps to his flat. 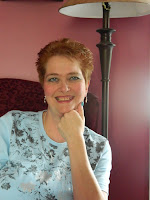 I believe I was destined to be interested in history. One of my distant ancestors, Thomas Aubert, reportedly sailed up the St. Lawrence River to discover Canada some 26 years before Jacques Cartier’s 1534 voyage. Another relative was a 17thCentury “King’s Girl,” one of a group of young unmarried girls sent to New France (now the province of Quebec) as brides for the habitants (settlers) there.

My passion for reading made me long to write books like the ones I enjoyed, and I tried penning sequels to my favorite Nancy Drew mysteries. Later, fancying myself a female version of Andrew Lloyd Weber, I drafted a musical set in Paris during WWII.

A former journalist and lifelong Celtophile, I enjoyed a previous career as a reporter/editor for a small chain of community newspapers before returning to my first love, romantic fiction. My stories usually include an Irish setting, hero or heroine, and sometimes all three. My novels, In Sunshine or in Shadow and Coming Home, set in post-Famine Ireland, are available from Highland Press. Playing For Keeps, the third book in the Claddagh series, is now available from Highland Press.

I am a member of the Romance Writers of America, Hearts Through History Romance Writers, and Celtic Hearts Romance Writers. A lifelong resident of Montreal, Canada, I still live there with my own Celtic hero and our two school-aged children.

Buy the book at Amazon and Barnes and Noble
Posted by MJ Thomas at 4:00 AM