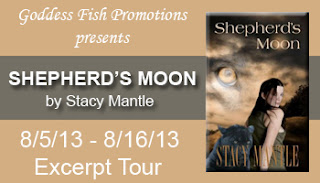 This post is part of a virtual book tour organized by Goddess Fish Promotions. Stacy will be awarding a $15 Amazon GC to a randomly drawn commenter during the tour. Click on the tour banner to see the other stops on the tour--- go read the other excerpts and get more chances to win!

It's taken twelve years to earn the official title of Shepherd but she's now mostly trained, fairly effective, and the first female in over two centuries to hold the position as protector of animals. All animals...

The Territorial Council isn't thrilled with her new title of Shepherd, but they don't have any more control over the appointment than they have over her. All they can really do is wait for her to screw something up - which Alex is determined not to do.

Everything changes when a chance encounter with a genetically modified Shifter leaves Alex shaken and initiates a quest to locate its maker.Despite years of training, Alex finds herself woefully unprepared to tackle the new threat.

To make matters worse, she must work with a mysterious man who's been trying to kill her since the day they met...

He nodded, a chilling smile on his face. “Who am I to stop progress?”

Swallowing the thick bile that rose in my throat, I turned away. Blood and guts I could handle. Betrayal was a different horror.

“Enough.” The voice rung out from across the room carrying enough authority to stay both our words.

Our eyes turned towards the voice. The man walked through the heavy doors pushed open by two members of what I could only assume were members of his private clan. He wasn’t a particularly large man — maybe a few inches over five feet. I was larger in both height and weight, but he carried himself as a much larger man would. I watched him approach as Adolfo backed quietly away and moved through the doors that the bear-shifter and another man now stood sentry over. Both looked remarkably similar to Diego.

He had a pronounced Middle Eastern accent. “And you are Alexandra — our elusive little Shepherdess.”

I shrugged, the best I could do under the circumstances. The unfamiliar dress and high-heeled shoes left me more than a little apprehensive about facing anyone down, let alone this tiny man. “Little, huh? If that’s not the pot calling the kettle black.”

He slapped me. Hard.

“We’ve been trying to reach you for some time,” he said, wiping his hand and regaining his calm.

“I haven’t exactly been in hiding.” 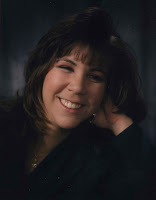 While Stacy Mantle is most well-known as the Pack Leader of the popular website, PetsWeekly.com, however she is rapidly gaining a fan base in the genre of fantasy with the publication of Shepherd’s Moon, the first book in her Alex Wilde “Shepherd” series.

Stacy has a B.A. in English, a post-baccalaureate in Secondary Education, and an MBA with an emphasis on Marketing. She is active in animal rescue and is a nationally-known pet industry authority. She currently resides in the deserts of the Southwest with several cats, a few dogs, and a very understanding husband. You can learn more about her at http://www.StacyMantle.com

Buy the books at Amazon(Paperback and ebook), BN (Paperback, Ebook), Lulu: (Hardback), and Smashwords (ebook).
Posted by MJ Thomas at 4:00 AM