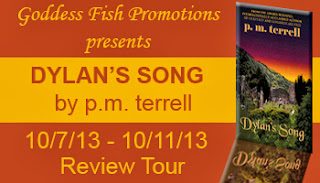 This review is in conjunction with a virtual book tour organized by Goddess Fish Promotions. One randomly drawn commenter will win a $25 Amazon gift certificate. Click on the tour banner to see the other stops on the tour.

Dylan Maguire returns to his native Ireland with psychic spy Vicki Boyd. Their mission: to locate and extract a CIA Agent who disappeared in Dublin while on the trail of a known terrorist. But when Dylan receives word that his grandmother is dying, he is plunged into a past he thought he’d left behind forever. His mission and the dark secrets he’d sought to keep hidden begin to merge into an underworld that could cost him his life. He must now confront his past demons and the real reason he left Ireland—while Vicki harbors a secret of her own.

Suspense Magazine says, “p.m.terrell’s writing is powerfully written and masterfully suspenseful; you have to hang on for the ride of your life.” Midwest Book Review says the Black Swamp Mysteries series is “page-turning action, unforgettable characters, breathtaking descriptions and unexpected plot twists.” And syndicated reviewer Marcia Freespirit says the series is “riveting, spell-binding, sexy and intense!”

Jump right into the action from the first page!  I expected excitement from this book and wasn't disappointed.  There's lots going on and not just in the spy business.

I haven't read any other books in the series, and admit to being a bit lost at first. There is history and backstory I wasn't familiar with so it took awhile for me to understand who was who and how they mattered to one another.  I'm sure that fans of the series will be thrilled to see so many familiar faces, but it was a bit difficult to get the gist of things at the start.

That didn't diminish my overall enjoyment of the book, however. Once I got things figure out a bit, it was full steam ahead and off to Ireland (over Dylan's very vocal objections).  Once there, secrets abound ... from Dylan's past, to Vicki's present.  I was fascinated by the look into some WWII history from an Irish point of view as well, since I had no idea of what was going on there at that time.

The book has a great mix of action, romance, paranormal, suspense and more.  I loved Brenda's role in this, though I suspect she wasn't always a nice character.  It made me want to go back and read earlier books to find out who she was then.

I admit to some disappointment at the "big reveal" of Vicki's secret.  I think it was resolved far too easy for all the build up behind why she was so worried.

Overall, though, Dylan's Song is a book that hit all my happy buttons.  Good suspense, good romance, good characters and good writing. Who could ask for more?

The thunder and lightning grew and intensified and the mist began to turn to more solid precipitation, though it stopped short of becoming a rainstorm. It was well known that one had no business being in a bog when it rained. It often came fast and furious and often the peat was buried beneath ponds that could suck men into them in mere seconds. Dylan found himself wondering whether the water would pour into the castle remains. It would be a horrific way to die.

He turned in his saddle and peered behind him.

Dylan shook his head. “Just feel eyes on me, tis all.”

“I’ve been feeling that same way ever since we left,” Perry said. He spoke in a stage whisper and his voice sounded strained and dry.

Rich stopped his horse and began to pull something out of his bag.

“Don’t stop,” Dylan cautioned as he went past him.

“Don’t stop. The horse could begin to sink. Keep movin’. Get anythin’ you need while you’re movin’.”

“I don’t like this place,” Rich said but he allowed his horse to fall in line behind Dylan and Perry.

The sky was ablaze now with lightning; it glowed blue over the bogs instead of the yellow or white he was accustomed to in the village. He couldn’t imagine Stephen Anders being brought here in cuffs or shackles and being led down the ancient steps to a forgotten ruin. He must have felt as though he was being buried alive.

And maybe that was their intent.

p.m.terrell is the award-winning, internationally acclaimed author of more than 16 books. Vicki's Key, one of the first books in the Black Swamp Mysteries series, was one of five finalists in the 2012 International Book Awards (Mystery/Suspense) and 2012 USA Best Book Awards (Mystery/Suspense.) River Passage, an historical work based on her ancestor's migration to Fort Nashborough in 1779-1780, won the 2010 Best Fiction & Drama Award. The Nashville (TN) Metropolitan Government Archives determined it to be so historically accurate that they entered the original manuscript into their Archives for future researchers and historians.

Prior to becoming a full-time author in 2002, terrell founded and operated two computer companies in the Washington, DC area. Her clients included the United States Secret Service, CIA, Department of Defense and federal and local law enforcement. Her specialty is in the areas of computer crime and computer intelligence. Her experience in these areas have greatly influenced her books' plots.

She is the co-founder of The Book 'Em Foundation, whose slogan is "Buy a Book and Stop a Crook" and whose mission is to raise awareness of the link between high crime rates and high illiteracy rates. She founded Book 'Em North Carolina Writers Conference and Book Fair, an annual event to raise money to increase literacy and reduce crime.