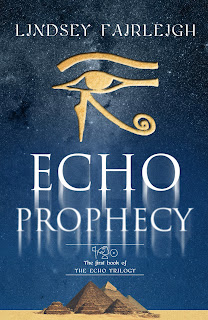 This review is in conjunction with a virtual book tour organized by Goddess Fish Promotions. Lindsey will be awarding a $15 Amazon Gift Card to a randomly drawn commenter during the tour--the Rafflecopter is at the end of the post. You can see the other stops on the tour here: .

Alexandra Larson isn’t human…but she doesn’t know that. As far as Lex is concerned, she’s simply an ambitious and independent archaeology grad student with a knack for deciphering ancient languages, especially the various forms of Egyptian. When she’s recruited to work on her dream excavation, her translating skills uncover the secret entrance to an underground Egyptian temple concealed within Djeser-Djeseru—the famous mortuary temple of Queen Hatchepsut. Lex is beyond thrilled by her discovery…as is the enigmatic and alluring excavation director, Marcus Bahur.

As the relationship between Lex and Marcus heats up, a series of shocking revelations leave the young archaeologist reeling. Once Lex discovers the truth of her ancient Egyptian roots—the truth of her more-than-human nature—the people she trusts most make one final, terrifying revelation: Lex is the central figure of a four-thousand-year-old prophecy. She is the only thing standing between the power to alter the very fabric of time and an evil megalomaniac…who also happens to be her father. As events set in motion over four millennia ago lead Lex and Marcus from Seattle to the heart of Egypt, the fate of mankind depends on one thing: the strength of Lex’s love.

My review: I agreed to read this book, even though I hadn't really checked to see what it was about. I sat down with it and just started reading with no preconceived ideas. By the time I finished the first chapter, I had to stop just to let my heart rate slow down. Wow!! What an exciting start to a story. I was absolutely hooked on just this chapter. I hoped the rest would be as good, but that isn't always the way things work out.

The next morning I brewed a pot of coffee, poured myself a cup and sat down to read. When I finally reached for my coffee, it was cold. So I poured it out, got a fresh cup and picked up the book again. At the end of chapter 16, I reached for my cold coffee, and got up to throw it out. Then without coffee since, I sat down to read again. I just had to know what was going to happen.

Each chapter was a thriller. I was never disappointed. I couldn’t imagine that the next chapter would be as good as the last, but it was always as good or better. Each chapter would reveal, in a suspenseful way, a new and exciting fact that impacted the heroine. I could hardly wait to turn a page. I was completely invested in the plot and the characters. I can't remember the last time I was so utterly caught up in a story.

This is a unique paranormal/suspense/ romance, and not like anything I had read before. It revolves around the heroine and she is the main character in the story. I will not go into details about this story. I wouldn’t want to ruin it for anyone. Basically it revolves around something that happened thousands of years before. And that is all I will tell you about the plot. You will have to read it to find out more. I do not think you will be disappointed.

I absolutely loved this story. I have to give it 5 Flowers because that's as high as we go, but I would give it more if I could.

5/5 Flowers -  I loved this book! It's on my keeper shelf! I highly recommend it.

Now, enjoy an excerpt from the story:

“I thought you might like to see this,” Marcus said softly as he set a flat, wooden box on top of the papers scattered on my desk. Through the glass top, I could see an impeccable, hieroglyph-covered stone tablet.

“Marcus,” I said without taking my eyes from the object in front of me. “Is this—”

“But where’s the other one? You said there were two.” I was leaning closer to the glass, trying to get a better look at the box’s contents.

“It’s unrelated to our present work.”

I barely heard his words, entranced as I was by the slab of smooth, gray-green schist.

“Can I open it?” I interrupted, eagerness evident in my voice. I looked up at him, pleading with my eyes.

“Oh. Wow.” With the glass lid removed, the artifact was even more amazing. Shaped like a closed parabola, the dark stone tablet looked like it could have been carved only a few days earlier. Every inch was untouched by the usual rigors of time. “Where’d you say you found this?” I whispered.

I gently closed the glass lid and faced him. “Okay, he-who-can’t-answer-an-implied-question, then where did you find it? And when?”

Across the room, one of the other men coughed in a way that sounded suspiciously like an attempt to cover up a laugh.

The corner of Marcus’s mouth quirked, but I couldn’t tell if he was hiding a smile or a frown.

Lindsey Fairleigh lives her life with one foot in a book--as long as that book transports her to a magical world or bends the rules of science. Her novels, from post-apocalyptic to time travel and historical fantasy, always offer up a hearty dose of unreality, along with plenty of adventure and romance. When she's not working on her next novel, Lindsey spends her time reading and trying out new recipes in the kitchen. She lives in the Napa Valley with her loving husband and confused cats.

Buy the book at Amazon, Barnes and Noble, KOBO, or Smashwords.